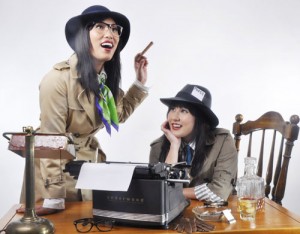 One night several years ago, Jen Wang and Diana Nguyen found themselves sitting by a fireplace, drinking scotch and making jokes about disgraceful Asian celebrities.

“We’d find ourselves always circling back to why it was so significant to have good Asian representatives instead of lame ones—there are so few public figures in the AAPI (Asian American Pacific Islander) universe, that it [unfortunately] places a burden on those in the public eye to represent us all,” said Nguyen.

And that’s exactly how Disgrasian came to be: The two created a simple hit list of all the “Disgrasians” (disgraceful Asians) and “Amazians” (amazing Asians), or for lack of a better word, a “Boba” if you were on the fence.

The rest is history. Since then, Disgrasian has grown to average over 11,000 unique visitors every month. The blog eventually evolved into a prime source of AAPI pop culture, as well as a candid forum for discussing hard-hitting issues about race, politics and society.

“There’s never one simple point of view that shameful behavior is all around us in this world, and that you don’t have to bang anyone over the head with facts and figures in order for them to learn a thing or two. It’s not about telling anyone what to think—or readers necessarily agreeing with what we think. It’s far more effective to draw someone with a laugh and get them thinking for themselves,” said Nguyen.

Whether it’s about the longstanding tradition of public shaming in China or the embarrassing candid photos of the “Asian Jersey Shore” cast, Disgrasian offers readers, Asian or not, a unique way of sharing their opinions, gaining perspective and discovering something about themselves they never knew.

“If something in the news pisses me off, then it’s probably something I should write about,” Wang said.

The pair said they work independently from each other, and there are very rare occasions when they will write about the same topic. Every week, Wang and Nguyen feature an “Amazian of the Week” and a “Disgrasian of the Week,” which vary from politicians, athletes and celebrities to ordinary people doing amazing and not-so-amazing things.

But like many Asian Americans, Wang and Nguyen lead ordinary lives doing extraordinary things. Growing up, Wang and Nguyen had tough Asian parents and their upbringing has become something that defines them. Though their families don’t quite understand what blogging is, they are very supportive of their work—and that’s all that matters.

“They’re excited about what we’re doing and how the site is growing. Sometimes I think my mom and dad are the most faithful people in the world because they always get behind my creative endeavors even though they only semi-understand what I’m doing,” Nguyen said.

Wang’s parents read the blog every day and send them notes on how they enjoy reading their articles. Their parents have always had insights and opinions to share, which has helped their blog grow every day.

“Both my parents read the blog and love it,” Wang said. Ironically, her parents don’t realize that when they read about “Hardass Asian Parents,” they are reading about themselves.

“My mom doesn’t recognize herself at all in what we’re writing. She’s quick to point out how terrible and overbearing her Chinese friends are to their children, but when talking about herself, she’ll say something like, ‘Your dad and I were really chill. We never pushed you to do this and do that.’ And I’m always like, ‘Riiiiight.’”

Wang followed a path any “Hardass Asian Parent” would want for their children. She went to an Ivy League, played not one but several musical instruments, got straight A’s, and did well on her SATs. But even though she eventually took an unconventional path by becoming a writer, she’s doing what she always wanted to do.

“For a moment in seventh grade, I wanted to be an astronaut, mostly to impress my ‘Hardass Asian Dad,’ who’s a physics professor and consulted for NASA. I kind of wish that I had followed that ambition a bit more because it would be really effin’ cool to go to space! But, other than that, I was always the kid who kept a journal and wrote short stories and made up little histories—like the time I created a genealogy for the Pac-Man ‘family’—so yeah, I guess I always wanted to be a writer.”

With thousands among millions of devoted followers and fans, where will Disgrasian take us next? Wang and Nguyen said they will keep doing what they want to do until they don’t. And that’s the beauty of writing—it’s a long, miserable yet rewarding journey that you just have to trust will take you somewhere.

As Nguyen said, “This is actually really un-Asian: we don’t know.”

Wang said, “Who knows. But honestly, there is no Disgrasian crystal ball. My ‘Hardass Asian Dad’ always said I was a poor planner—and, you know what? He was right!”