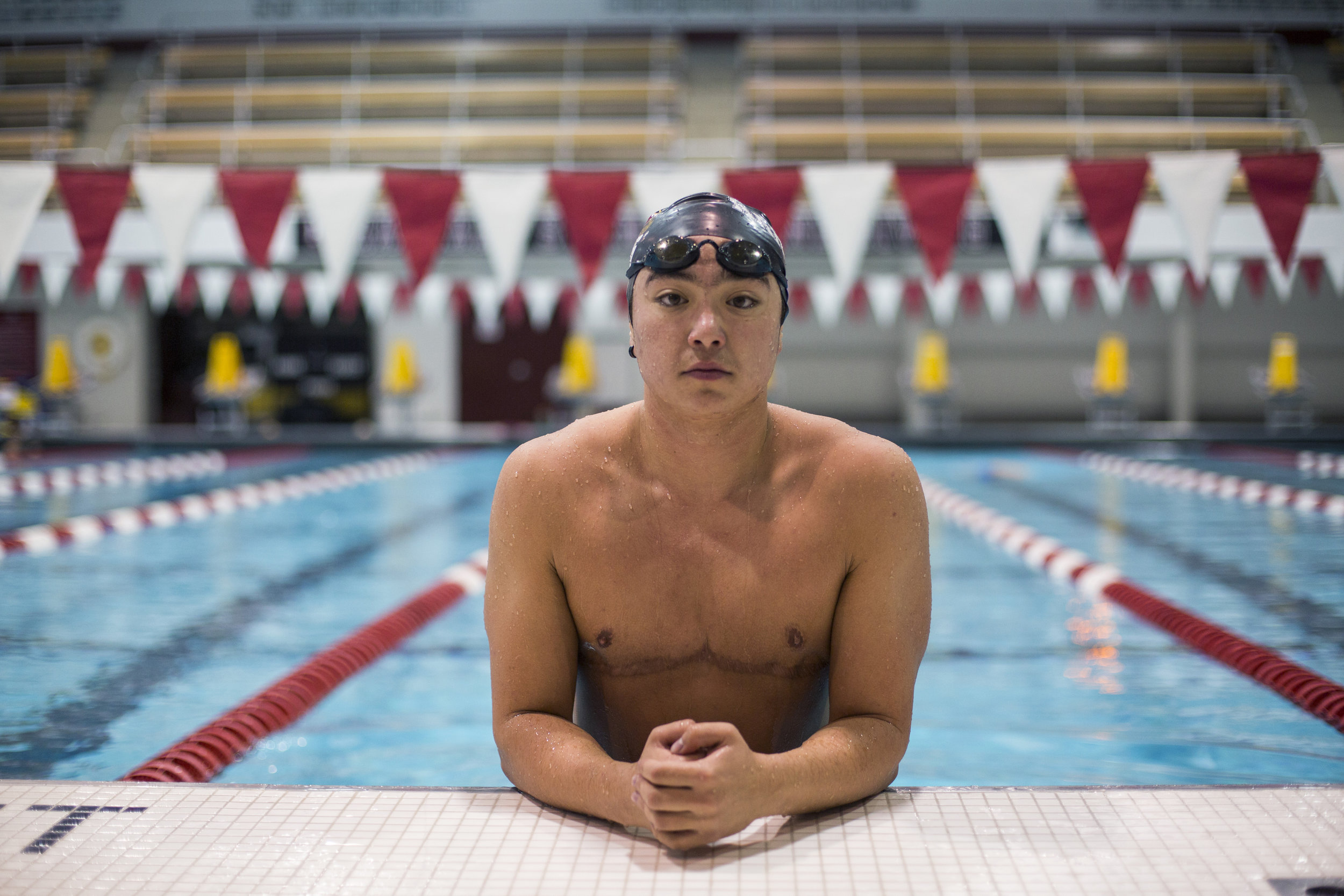 Schuyler Bailar is making waves in the swimming community for more than just his athletic prowess. The 22-year-old athlete currently competes for the Harvard Men’s Swimming and Diving Team and is the first openly transgender swimmer on an NCAA Division 1 men’s team.

Bailar has always preferred to be underwater. “I revel in the quiet,” he explains, describing himself as a “water baby” from the beginning. It wasn’t until he watched the 2008 Olympics that he realized he wanted to swim at a competitive level.

“I watched people pursue greatness and thought, ‘I want to do that,’” he says.

Assigned female at birth, Bailar began to contemplate his gender identity while undergoing treatment for an eating disorder during a gap year before college. He shares: “Up until that point, I had never discussed gender identity. I had come out as lesbian at one point because that’s what I thought was different about me, but that didn’t really scratch the itch.”

Examining the root of his body image issues turned out to be the key that unlocked the mystery.

It was then that Bailar first thought of himself as transgender.

“It was an a-ha moment but also a terrifying moment, because I didn’t know what it all meant,” he says. “I wrote it in my journal and that was the first time I used transgender in reference to myself. I realized that my body issues were not attached to eating disorder fears of being fat but were actually attached to gender.”

Although his parents always encouraged him to be himself, it took some time before Bailar felt comfortable with openly discussing gender and sexuality. With regards to coming out, Bailar reminds us that a person’s attitude can affect the way they are received: “People can only support you if you let them. We are so afraid of what our families will think, and I understand that fear. But we have to give people a chance. If you come out with a defensive attitude, you will be received with an attitude.”

Bailar continues: “Can you come out in all the right ways and have people still reject you? Yes. Of course. But you have a better chance of being accepted if you go into it with grace and you give the other person an opportunity to receive you in a positive way.”

His experience as a Harvard swimmer speaks to this sentiment. He marvels at his team’s support. “They did everything they could to make me feel like one of the guys. They were more interested in what it was like to be on Ellen than what’s in my pants,” he says. “Initially, I thought they would see me as different. And that pushed me away from them. It wasn’t them pushing me away. That was my own emotional process.”

Bailar is aware of the difficulties associated with coming out as transgender to Asian family members specifically, where conversations about gender and sexuality are often stigmatized. “When I was coming out to my Korean grandparents, I was terrified,” he says. “I thought they were going to disown me or get really angry at my mom. They didn’t. That speaks volumes to my grandmother and how open-minded she is.”

In some instances, it may take more work to find the right language for effective communication. “In Korean, for example, there aren’t words for gay and transgender,” he says.

Bailar hopes to inspire those in search of a transgender role model in the athletic community, particularly because he didn’t have one, and he realizes the effect that had on his self-awareness and coming out. “I spent a lot of time Googling gay swimmers or LGBTQ athletes or trans swimmers, and I found no one who looked like me or who did the things that I do… I told myself that swimmers are not gay, so I can’t be gay,” he says. “When I was trying to come out as transgender, I didn’t find any out athletes [either].”

“I want people to be able to Google ‘trans swimmer’ and have somebody pop up,” he says — and that’s something that Schuyler can now count as an accomplished goal.