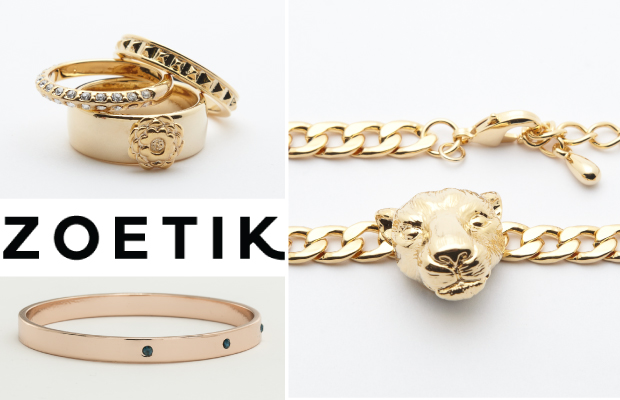 The brainchild of Jason Choi and Vivienne So, ZOETIK is an online trove of hypoallergenic lead-, nickel-, and cadmium-free designer jewelry at an affordable price. From bracelets, earrings, necklaces, and rings, you’ll find many modern, vintage-inspired, and elegant pieces of jewelry fit for every woman in mind. So says the namesake of their business comes from a biology word called zoetic, which means “pertaining to life” with the idea that fashion is alive and ever changing.

The two originally connected at Northwestern University, but after graduation, Choi went on to work at CAHG and Ogilvy while So pursued a career in fashion e-commerce, working stints at Rogan and Loomstate and Gen Art. It wasn’t until a few years later that Choi and So decided to get together and launch their own jewelry e-commerce.

“Jewelry came naturally for us because it is something we don’t see a lot in the current fashion landscape,” Choi says. “We want to deliver something wearable and made with great quality.”

So says she was inspired by the stylish, affordable jewelry at stores like Forever 21 and H&M that her friends always bought whose quality would never last. “Eventually their jewelry would lack luster and turn a different color. People don’t understand how the chemicals in your jewelry can affect your skin,” So says.

With established relationships with jewelry manufacturers, Choi and So are able to communicate directly to them about the kind of materials that are used to create their jewelry—focusing on natural elements like real gold, platinum, and rhodium and quality crystals (think Czech, Austrian, and Swarovski).

Each month, Zoetik launches an exclusive collection of jewelry, sometimes with a charitable goal—their most recent collaboration was in collaboration with Restore NYC, a nonprofit that helps victims of sex trafficking rebuild their lives. Moreover, Zoetik works with emerging and local designers and are always on the hunt for fresh talent; designers can pitch their collections directly on their site via submission form.

Since Zoetik launched in April 2013, it’s nearly doubled its customer base with more than 700 Facebook fans and 3,000 unique visitors. Their products have been featured in Refinery29 and The New York Times, and Choi and So have also held traveling pop-ups and shopping events throughout the city.

Their advice for young entrepreneurs and designers? “Be prepared to work a hundred times more than what you imagined. You have to believe in your product and make sure you have the support to execute and operate your business. Never stop talking to people,” Choi advises.

So says, “Be hands-on. No one else is doing the work but you. And always remember to be patient; everything won’t be an overnight success. Be sure to set the right expectations.”