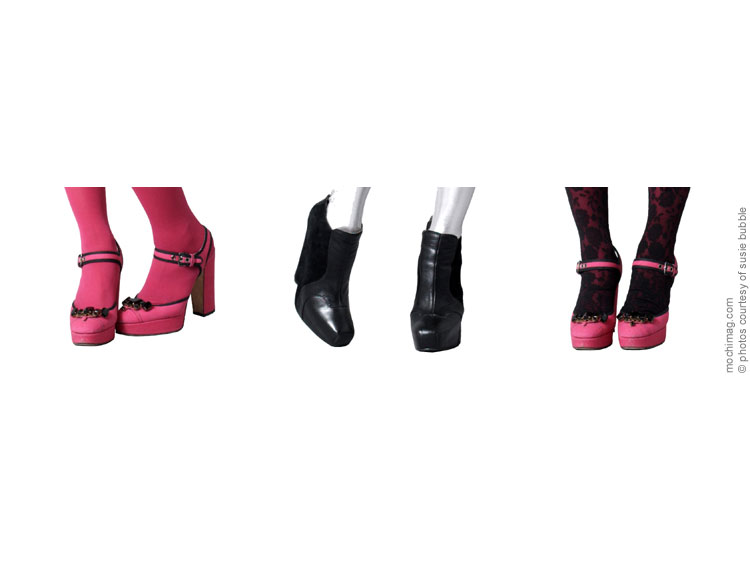 Susanna Lau of the Style Bubble fashion blog is better known throughout the blogosphere as “Susie Bubble” — an alias that she garnered from her friend, Sarah Hill, back in elementary school. Incidentally, long before blogging existed, an entire class of children began to call her by her famous nickname because she always looked like she was in a world of her own. “I was in a bubble!” she affectionately recalled.

Nowadays, in spite of her nickname and blog name, Lau is one of the most artistically, culturally and sartorially involved individuals in the fashion media industry — a far cry from the “bubble” of her childhood years. She began blogging because she wanted to “channel random thoughts about fashion” into a space of her own, after “geeking out” on fashion forums such as The Fashion Spot. Lau discovered that bloggers have the ability to cover obscure information with speed and variety that most print publications have not yet achieved. For buyers, public relations agents and trendspotters, bloggers are gems of resources — and Lau is a rare blue diamond. “Blogging three times a day for three years is weirdly enough the most consistent thing I’ve ever done,” she said.

Her passion and keen eye for design led her to become the commissioning editor for Dazed Digital, the groundbreaking online counterpart to the British style magazine, Dazed & Confused. Lau admits that “it’s been tricky to juggle the blog and [her] full time job at Dazed, but it has been really amazing overseeing the development of Dazed Digital.” Because she has never worked with print before, she was recruited to be a member of the staff in order to offer a different perspective and to approach the online relaunch “in a completely different way to print.”

One of the differences between working in print and working in digital is the level of work pace. Lau is able to — and must — work at a faster pace than her print counterparts. Additionally, she must respond to reader feedback in the form of comments and website traffic. Fortunately (or perhaps unfortunately), for print media, instantaneous feedback can be largely ignored. “The pace can wear you down. Also, looking after a website is a 24-hour job. If something breaks, you have to fix it right away,” she admitted.

Lau discovered that some benefits to working in digital include fewer restrictions (for example, no need to make sure all images are in high-resolution) and a bigger scope of topics to cover. However, in spite of digital’s ability to cover vast amounts of information, Lau believes that print media will still remain as a substantial and profitable industry in the future because “the two media are consumed in different ways.” The digitally inclined blogger is not worried about print in this increasingly environmentally conscious world, because “what print excels at is not replicable online, the tactile feeling of flicking through a magazine and reading the lengthy interviews with fantastic people and seeing the fashion editorials.” According to Lau, contrary to popular belief, the core of the fashion industry has not changed much as a result of the digital boom. Instead, the rise of digital has changed the average consumer’s perception of fashion and how the information is dispersed to the general public.

The combination of her love of fashion and her dive into the digital world as an editor and blogger culminated in an unforgettable moment when she was late to the Lanvin Autumn/Winter 2009 show, and tripped on the way in.

“With blood tripping down my knees and tights, I crouched in the front row just as the show started. The models strode out on the wet concrete floor and for about 10 minutes, I forgot I was bleeding and in a bit of pain because it was that beautiful. It’s pretty cheesy to talk about fashion like that, but that’s how it was!” she said. Now, this is why Lau is the it-blogger of the fashion blogosphere.