Behind Google Maps: an Interview with Jessica Lee

Mochi got the chance to interview Jessica Lee, a former Google employee who worked with Google Maps. Jess, who grew up in Hong Kong and went to Stanford for college, gave us some great insight behind the scenes at a big online company. Jess left Google in 2007 to work for Polyvore.com, a fashion community website where people can mix and match products from any store, and currently resides in California.

Mochi: How did the Google job come along?

Jess: I had expected all along that I would be a software engineer, so those were the jobs I was looking at. I planned to join Intuit, which makes tax and accounting software, when I got an email from a Google recruiter.

Mochi: What was the journey like getting hired by Google?

Jess: The interview process at Google was a lot longer and more chaotic than at other tech companies. I did about 11 interviews, but they were all casual and really friendly.

Mochi: Speaking of casual, I have to ask about the lava lamps and beanbag chairs… Is it true?

Jess: Yes, lots of lava lamps, beanbags, and colorful bouncy balls. I remember I was in the middle of an interview in this room with a floor-to-ceiling glass window that faced the hall, and all of the sudden a huge red ball (the kind you see at the gym) rolled past our room. I stopped mid-sentence and was like “What was that?” and my interviewer waved his hand and said “Oh, don’t worry, that happens all the time.”

Jess: It’s a lot of meetings with my engineers and then some time making mockups of ideas and then designing new features. Of course, punctuated by an amazing lunch/dinner/breakfast at Google’s great cafes. The point of the Associate Program Manager program that I joined was to train young people fresh out of college and to teach them to be product managers. Google just kind of threw you into it and expected you to hit the ground running. Sink or swim.

Mochi: What projects were you working on at Google?

Jess: There is this feature of Google Maps called My Maps, which lets people create their own maps by dragging and dropping pins and plotting lines on the map. In the beginning, we decided we wanted to create a feature that allows people to make their own maps, so we could have a more complete map of the world. I got together with a group of engineers who were also interested, and we got a user interface designer and a usability researcher. It was our little team.

Mochi: So all these people are in different branches of Google?

Jess: Well we’re all generally assigned to Google Maps already, but yes, this was a specific team out of that group. We also got some volunteer help from people in other teams/departments unrelated to Google Maps.

Mochi: Does everyone have time to do everything? 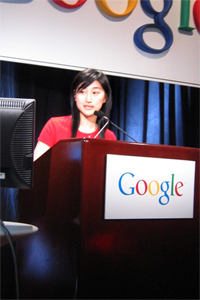 Jess: Google has this thing called 20 percent time where anyone can work on any other project in 20 percent of their time so we had our own group of “20 percenters” who helped out. We started designing the feature with lots of brainstorm sessions, writing on whiteboards, coming up with mockups, building a working prototype. The usability researcher tests it in the lab where people from outside Google come in and play with the feature. We’re on a side of a one-way mirror, watching people interact with the prototype.

Mochi: This sounds like a costly process – innovative yet pricey – how do you think Google is doing now in the recession?

Jess: Well, I left Google in 2007 before the economy tanked, but Google is pretty well positioned because it makes a product that people love to use and it has a strong monetization model that works. With online advertising through Google, you know exactly what you’re getting back for your money.

Mochi: So I guess the only question left is, why did you leave?

Jess: I wasn’t looking to leave, but I had gotten a little restless.

Mochi: And then Polyvore popped up?

Jess: I fell in love with this fashion online community, but the small technical stuff bothered me. So I wrote a long email to the CEO and bam, got offered a job.

Mochi: In this new and upcoming industry … are there a lot of Asians?

Jess: In tech companies? Yes. Especially at Google, promotion of innovation and new ideas is ubiquitous. There’s an open mailing list that anyone can join to mail in ideas and get feedback. In general, tech companies are open company cultures. And, following the liberal feel, Google is race-blind and all kinds of people work there. Google even spoke out against Prop 8 here in California.