Home BeautySnail Creams Are All the Rage in South Korea

Snail Creams Are All the Rage in South Korea 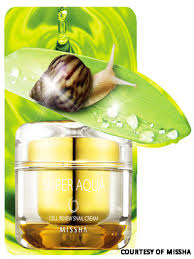 Leave it to Korean cosmetic companies to be the pulse on beauty trends in Asia. The latest phenomenon: snail cream. Although this news isn’t earth-shattering—Europeans have used snail mucus in their products for years—snail cream has become ever popular in Korea and there’s a big reason why: the secret is in the slime. Korean cosmetic companies claim that snail guts contain skincare benefits, keeping skin youthful, soft, glowing, and dewy. News first spread about the benefits of snail slime in 2006 when Chilean farmers who were handling snails for the French food market touted how smooth and soft their hands were after working with snails. Since then, beauty products and face creams that contain snail extract have been selling quickly. Some Korean BB creams now also contain snail extract. Like any fad beauty product, there’s solid scientific assurance that snail cream is a heaven-sent secret to beautiful, youthful skin, but many people who have tried it find that it has helped improve the texture and appearance of their skin. What are your thoughts on snail cream? Have you tried any?