Home EntertainmentWill.I.Am and Nicki Minaj’s MV for ‘Check It Out’ Splashed With Korean Words

Will.I.Am and Nicki Minaj’s MV for ‘Check It Out’ Splashed With Korean Words 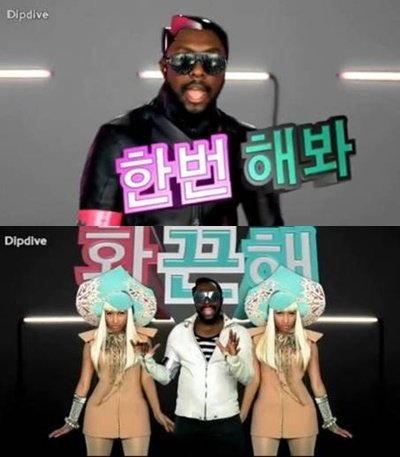 Will.I.Am recently released his music video for his new single “Check It Out” featuring Nicki Minaj and it’s full of Asian influence. The video starts off with an Asian guy introducing the song in a funny, thick English accent, while phrases of the lyrics translated into Korean text pop up throughout the video. The Korean words likely have to do with the fact that Will.I.Am has been busy working with K-pop girl group 2NE1 on their U.S. debut (check out scenes of their recording sessions on 2NE1’s YouTube page here). The MV’s fun and catchy and it’s great to see the influence of K-pop fever making its way to mainstream music in the U.S. [via PopSeoul!]
[youtube=http://www.youtube.com/watch?v=pqky5B179nM&w=425&h=350]

0 Replies to “Will.I.Am and Nicki Minaj’s MV for ‘Check It Out’ Splashed With Korean Words”