Chelsea orders her wine with a straw—so that it won’t stain her teeth. The camera pans to the beautiful clothing, sparkling jewelry, and Vancouver casino lights that surround her and her friends. When another waiter arrives to ask what the girls would like, one responds that she wants one of every appetizer on a silver platter. “Make it pretty,” she adds.

These are the everyday choices of a new, affluent demographic in town: Ultra Rich Asian Girls. And that moniker also happens to be the title of the newest show on HBICtv—the online Canadian channel whose initials stand for “hot b—– in charge”—featuring the lavish lifestyles of four extremely wealthy Chinese Canadian young women: Chelsea Jiang, Florence Zhou, Coco Wang, and Joy Li.

“Not another reality show,” you might say. After all, at first glance, the premise of this show sounds pretty familiar, following the launch of the Kardashian-esque Rich Kids of Beverly Hills. But Kevin Li, the creator of the show and broadcasting veteran of 16 years, hopes to convey something different.

Li explains that, in broad strokes, he’s seen “three different types of Chinese” settling in Vancouver in just the past three decades. “At first, it was the Chinese from the agricultural villages that first came to North America. In the late 1980s and early 1990s, I saw people from Hong Kong driving BMWs and Mercedes Benz. Recently, in the past ten years, an even more affluent demographic came to Vancouver—the Mainland Chinese.”

Needless to say, the four girls in his unscripted show were chosen to represent the last group here. They can be seen in the pilot episode debating brands and style, swapping gossip, and discussing topics like whether you’d tell a friend something’s in her teeth or whether someone’s breasts are real.

And while one might want to lump them into one spoiled group, Li says that he cast the four very deliberately. “They all have different personalities, and they didn’t know each other before going on the show,” he says. Chelsea (24), for instance, graduated from the University of British Columbia with honors in Math. Florence (27) studied fashion in Italy and has started her own line of designer active wear. Coco (19), the youngest of the group, aspires to be a singer and dancer. And Joy (21) is a college student studying fashion marketing with an eye on modeling.

That said, there’s one thing that these young women of the show all have something in common: They’re leading independent lives and working toward their own dreams. Whether or not they would still feel independent without their parents’ credit cards is debatable. Still, as Li says, “They have great stories to tell. And yes, their mommy and daddy are rich, but they can stand for themselves as well—and I wanted to reflect that in the show.” 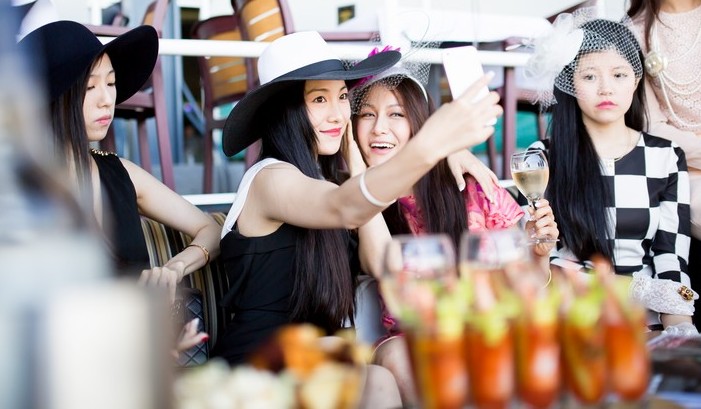 Each episode consists of the girls interacting with each other while traveling around Vancouver’s restaurants, casinos, and hotels, as well as abroad to destinations like grand Vienna and exclusive private islands. Unsurprisingly, Li immediately received criticism from viewers. But more to the point, many responses, as he had anticipated, have been a reflection of “yellow peril”— the stereotypical idea that East Asian people are “mysterious” with a power and influence that pose a danger to Western civilization. The term was first coined in the 1890s when an influx of East Asian workers arrived in various Western countries, particularly Chinese miners and railroad builders in California.

More than a century later, Li describes a new, modern-day yellow peril that is happening in Canada, as more of the wealthy Chinese class move into the country. “The new ‘yellow peril’ happens in North America because [the Chinese] have a lot more money and speak a different language. People don’t know about them and they’re scared. I get it. And the show is very different. People should give them a chance.”

Interestingly enough, some of the criticisms come not just from Americans and Canadians, but also Chinese Americans and Chinese Canadians. Li sees the show as a peek into the lifestyle of this interesting demographic. He wants his viewers to recognize that some racially filled comments only “set us back 20 years,” where people judged others solely by their race and income, and not by the content of their character.

So, with all this in mind, what’s Mochi’s verdict?

I found myself watching with mixed feelings. Between the tidbits of conversation and individual interviews were scenes of the girls asking for the prices of name brand cars and jewelry. “$345,000? That’s not a bad price.” Watching the first episode made me immediately wonder if it was just another reality show that takes average viewers into a world where they can vicariously live through the days of the rich, or provide a bit of escapism for the rest of us.

But a few more episodes in, I found a few breaths of fresh air after being underwater in the sea of mundane and superficial ways of living.

In the second episode, “Opium War,” Chelsea explains that when she was young, her dad was always working to pay for her private school education while her mom took her to piano lessons and dance classes. She says, “I appreciate the life and education they gave to me. I’m lucky.”

By the third episode “Sleeping with the Frenemy,” Florence explains how, when she grew up in China, her parents’ salary was about 100RMB a month—the equivalent of $20-30 CDN. “So they taught me that I have to be brave when doing business. I have to take risks,” she says. “This is why I’m starting my own business right now.”

It was a pleasant surprise to see an incorporation of Chinese family values in the girls’ individual journeys to professional success. And indeed, Li says that that’s exactly what he wants the audience to recognize. In his plans to dispel negative perceptions of superficiality, he hopes that view will “get a different mindset of the mainland Chinese coming to North America.” Our question is: Will these more thoughtful scenes continue to appear and resonate with others?

Li, who has always been passionate about Chinese Canadian history, does share plans to incorporate more of the Chinese culture into the show—including the history of Chinatown and the traditions of the Lunar New Year. He refers to his method of such cultural education as “hiding vitamins in the candy,” a concept that I’m willing to give a shot.

In the end, though, Ultra Rich Asian Girls is still first and foremost a reality program designed for entertainment—to provide the drama and wealthy lifestyle that many people crave. And it no doubt capitalizes on the controversial over-the-top consumerism to shock and create buzz (for audiences in China, Taiwan, and Hong Kong, as well as in North America). We think the jury’s still out. Breaking stereotypes is always a worthy cause, but we’re waiting to see if those underlying messages can outshine the glare of designer brands and diamonds.