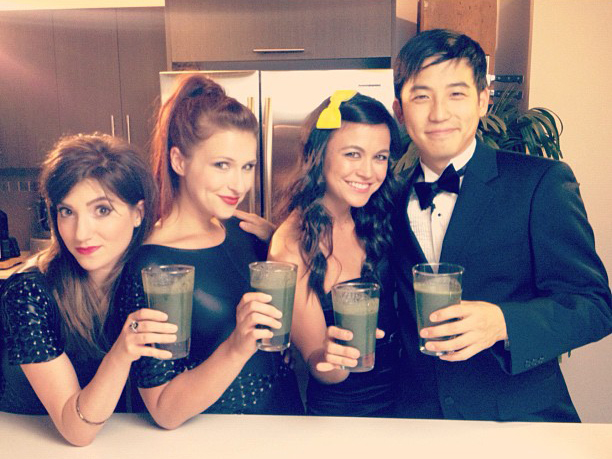 Books and movies can give us some serious cravings, whether it’s butterbeer in “Harry Potter” or Peeta’s bread in “The Hunger Games.” Two creative chefs having been taking the Internet by storm as they make these fantasy feasts into reality with “Feast of Fiction, a weekly cooking show on YouTube and RocketJump.

It all started with a chat between Jimmy Wong and his brother, Freddie, a master YouTube producer, about what the giant hosting site still needed. “We grew up reading “Harry Potter” and a bunch of other books that had these big feasts, where the authors would describe all the characters devouring this incredible food. It always left you hanging because you could never actually eat it,” Jimmy said of his inspiration.

After he brought Ashley Adams on as a co-host, the show launched in December 2011 with a soufflé from the videogame “Skyrim.” Despite the fact that neither of them had professional cooking experience, neither was intimidated by the project, instead seeing the show as a continuing education of sorts. 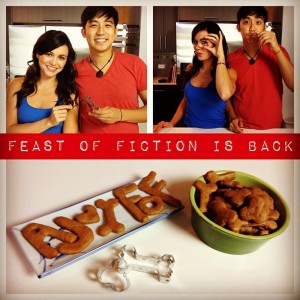 “Feast of Fiction has been my biggest actual introduction to learning how to cook and being in the kitchen,” Jimmy said. Before that, his initial forays into cooking were like most others—asking his mom about his favorite dishes and learning traditional Chinese recipes in order to survive college. Ashley, who is three-quarters Irish and one-quarter Japanese, likes to call herself a creative baker after picking up the hobby in college.

“I would bake what I considered cool cakes for my friends’ birthdays and celebrations, which became a tradition, and then it just developed throughout the years to what it is now—which is so much more advanced than where I came from,” she said. Since then, she and Jimmy have made everything from “The Hunger Games’” famous lamb stew to lemon cakes from “The Game of Thrones”.

But it wasn’t just the kitchen adventures that drew the co-hosts to pursue the idea of the show.

“I have a great love for fiction in general,” Jimmy said. “The fictional food aspect of it is just one of the details of the universe that can be expounded. If I could have a show where I could teach people how to cast real Harry Potter spells and make things float around, I’m sure I would be just as interested in putting that to life.”

Behind the scenes, the co-hosts bounce ideas off of each other based on fan requests and what’s relevant to their audience. Most recently, they created a feast that coincided with the highly anticipated release of “The Dark Knight Rises.” Then, Ashley explains, “we basically find recipes that we like and we manipulate them in a little way.”

Making these recipes attainable to their audience is key. Both Jimmy and Ashley agree that “Feast of Fiction” is a relatable show that happens to have beautiful aesthetics to make it pleasing to watch. And while they know many of their viewers never actually put their recipes to the test, but there’s still something about seeing a real recipe for a fictional dish that’s deeply satisfying all the same.

For those who want to start their own first experiments in the kitchen, Jimmy and Ashley have accrued plenty of tips. Jimmy shares the essential tools he lives by: “I’d say the most important thing in my kitchen is good measuring cups, that you can wash quickly, and a sharp knife—as long as it can get the job done, it’s a good knife,” he explained.

If you want to get a bit more serious and are willing to make an investment, Ashley suggests saving up to purchase a KitchenAid mixer. “It’s one of those appliances that you will carry on with you when you get married,” she said. “Pass the bad boy down to future generations.”

Jimmy adds a final note: “Try to have fun when you’re in the kitchen. You’re creating something out of nothing. It’s a beautiful thing.”