Home Career, EntertainmentThe Far East Movement Has Started a Party We All Want to Be Invited to 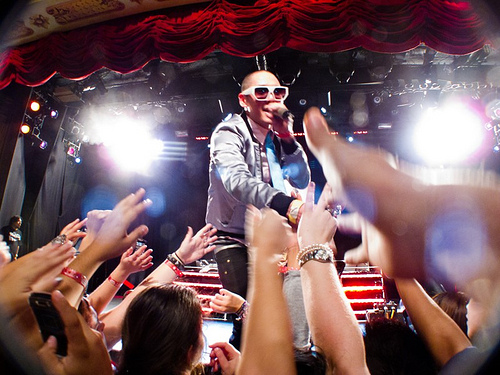 Like runway strobe lights prepared to guide a supersonic airplane to takeoff, electronic drums pulse and clang, lining the first verse of the hit single, “Like A G6.” But there is no airstrip here—I’m standing in Times Square, and instead of thundering jet engines I am surrounded by a horde of screaming fans, who literally cause the air to shake with a roar of recognition as Far East Movement plays the first notes of their latest and most infectious song.

I had the chance to sit down with Far East Movement backstage right before their Hard Rock Café performance back in October, in an attempt to capture them at a new turning point in their success as artists. The recent rise of the group (abbreviated FM) has been as quick as the private jet referenced in the song name; “G6” has shot the group’s four members from the cement to the stratosphere, grabbing both #1 on iTunes and the coveted #1 spot on Billboard’s Hot 100. The song itself is now ubiquitous—conceived in LA’s Koreatown as a staple of California clubs, it has charted on lists across the world and has people of all backgrounds feeling “so fly like a G6.”

What is unknown to many new fans is that Far East Movement is comprised of four Asian American artists who go by the names Kev Nish, Prohgress, J-Splif and DJ Virman. While they may appear to be fresh faces, the group has already been in the music business for years. 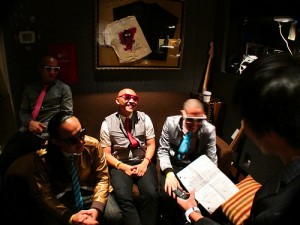 Sitting across from me on a couch in a back office of Hard Rock Café, Kev Nish described the evolution of their band.

“When we first started, we would record music in the attic of a homie’s crib… so we would take an old school computer, big monitor, plug it in, RadioShack mic and record music. The first song we ever did was a song about our lifestyle. We wanted an international outlook on downtown LA—a generation that’s not defined by any specific genre but a mixture of your playlist.”

Flash-forward about a decade to the present and three studio albums later, the group’s core creativity has survived undiluted. Kev Nish recounted how a Cherrytree Records executive told them, “You guys have a party that we want to be invited to,” upon signing the band. Given the license to forge their own sound, the band described wanting to create something different and refreshing: “We fused everything we were a fan of, everything that inspired us: hip hop, pop, electronic, alternative, put it all into one—created that sound and called it Free Wired.”

As they spoke, I couldn’t help but notice a remarkable ease and poise about the four musicians, who seem as relaxed minutes before the concert debut of their new album as any friends might be on a regular weekend afternoon.

“We’ve been homies for so long,” explained Prohgress. “You gotta make sure that all four of us are on the same page with everything, whether it’s our ties, or whatever, everything has to be straight… we’re like brothers now to an extent.”

When I asked them about their recent success on national charts, especially in light of being the leaders of Asian American music in the American mainstream, the group remained steadfastly humble.

“We’re really proud,” said Kev Nish. “We really appreciate the fact that the [Asian American community] sees it that way, and we appreciate the fact that they’re proud. And at the end of the day, we grew up in downtown Los Angeles; we grew up as American kids. For us, the struggle of being an artist, as it is—we want to inspire everyone equally, anyone that’s creative, that’s trying to pursue their dreams.” 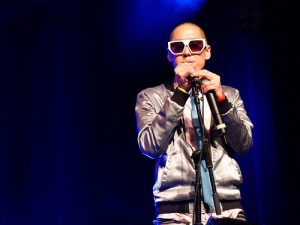 Part of their effort to inspire includes helping out with 4c The Power, a non-profit organization that provides training in the arts by professional artists for the youth. When FM first started, they never had anyone to talk to in terms of how to make music, and relied on trial and error. As a means of giving back, they teach workshops for kids on how to write songs to help build confidence in the community (the four C’s stand for culture, community, creativity, career).

“It’s really cool because the kids—they actually have more ideas than we do,” said Prohgress. “We might use a couple of those ideas for the next album ‘cause they didn’t copyright it or nothing,” he joked. “Nah, but it’s just a lot of fun working with them. And we work with them the same way that we make our music—it’s just a big round table—we’re clowning each other, he’s making fun of my glasses, and we’re just having a good time.”

Thinking of our dear readers, I couldn’t help but ask if they are currently single before we wrapped up. Sighing slightly, they all affirmed that they were.

“But you know what, right now we’d probably be the worst boyfriends in the world, because we’re traveling,” said Kev Nish. “Our careers are important to us, and we’re never home. So you know that definitely doesn’t make for good husband material.” Here, Prohgress was quick to inject his own thoughts: “Aw man, it’s a Free Wired world, you know, I could be Skypin’ with her all the time.”

As the band members each shared their thoughts on their ideal girls, answers ranged from “stays on the computer” to “ten toes, ten fingers.” However, in the end they all agreed that it was about being “Free Wired”—being open-minded, confident, able to “geek out,” and having “good taste in music.”

Moments before heading out onto stage, I asked FM what was going on in their minds and what they do to prepare.

“We’re humbled, and we’re flattered, you know,” admitted J-Splif. “We’re nervous, we’re excited, we’re stoked, all of that jumbled into one little bowl, so we’ll see what happens when we get out there.”

Prohgress added, “Always gotta get our prayer in, gotta get a rehearsal in, and always gotta probably get on the chat for a couple minutes. If you guys ever wanna hit us up, we’re always online—Facebook, all that, Twitter… go on our website, we’re always blogging, doing all that.”

As each member came up to me afterward and graciously thanked me and Mochi for the interview, I felt a visceral excitement for the group and their immense promise. Not only are they a success story for the Asian American community, but they are a testament to the power of dedication and an example of justly rewarded creativity and talent. It was a rare treat to talk to Far East Movement at this major turning point in their career, and it is nothing short of thrilling to see where they will go in the future.