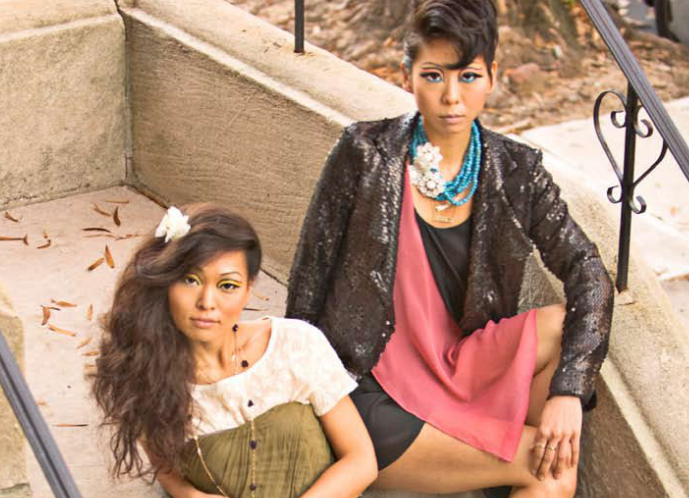 In some ways, sisters Knewdles and Sos have what is possibly the most typical sibling relationship in the world—they fight, they squeal on each other, but they also are closer than ever. Yet most sisters don’t grow up, move in together, and decide to start a hip-hop group of their own. Below, the sisters answered a few questions for us.

What were you like as children?
Knewdles: We were big readers. We were crazy with books.
Sos: Our parents banned us from reading—we’d read in the car, in the shower. It became a form of rebellion. Growing up with Asian immigrant parents, there’s a language barrier. They wanted to control so much of what we did, but they didn’t know what we were reading. In their mind, reading is good, but we read a lot of crazy junk.

How did you two get a long as children?
K: Our family dynamic bonded us together. It was us against them, them being our parents. But at the same time, we were both angry kids. I would get angry when she sold me out to my parents, but we had each other’s backs. That’s what carries into adulthood every day. It’s pretty intense because we chose to do this together, but we don’t have a typical sister relationship, where we’re best friends. We’re constantly fighting and negotiating and all that goes with it, but optimally, it makes our music better.

How did you get the idea to start a group together?
S: Since high school, Knewdles was always really into hip-hop and thought she’d be a ghostwriter. I quit violin for seven years, but once I started playing again, I thought I’d start a career in classical violin. Then I started playing with some rock bands, and just couldn’t go back to classical. It was a pretty natural transition.

How did your family react?
S: They reacted better than I thought. The difficult part was when I said I was going to play violin professionally. They said I was insane. But when we started doing stuff together, they said it was cool. We joked that we could do anything—start a garbage collecting business together—and our parents would be happy. They like for us to take care of each other outside the home. And now they’re supportive, and like our music.

How did the names come about?
S: Originally, Knewdles was Miss Nomer, MC. Then when I joined, we added the S in parenthesis, which could stand for sisters, or strings. Then I came up with Sos, for Sis on Strings, and soon after that, people would say, you’re Sos, what are you, Noodles?

K: Then it actually became Knewdles, which suits me. It’s a verb, a noun, your brain, your body, it’s everything. When you noodle, it’s musical. But I wanted to spell it differently. The funny thing is that it totally makes sense. Noodles and sauce is Asian, but every culture has a noodle and pasta in it. It only makes sense because we’re Asian. That’s the awesomeness of the name.

What was the process of recording your first CD like?
K: it never takes the amount of time that you think it will. A guy that we worked with mixing the album said, “You can’t think of an album as being the end all be all, it’s just a time stamp. Whatever you get, recording-wise, by the time you hear it, you think you can do it better. At some point, you have to accept it’s a moment in time and move on with it. Let it go. Did we do that successfully? Yes. Unfortunately, for us to achieve that moment in time, it took a lot longer than we would have wanted.

Describe your relationship in one word.
K: Enduring.
S: Karmic. I really feel like my sister and I have a deep eternal connection. It’s a strong bond. We’re such mirrors and reflections of each other, but from total opposing sides. There are times when we really hate each other and there are times when we really love each other. We’re so connected that that only thing that I’m sure of is that our connection is beyond this lifetime. We have some sort of great mission together, even if it’s just to change things between us, or to do something for other.