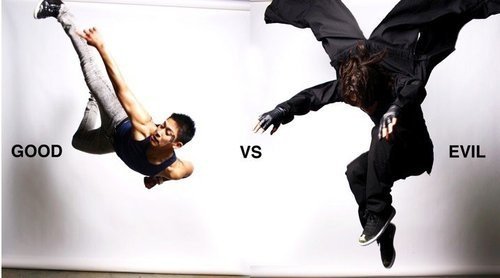 A while back we reviewed the first season of “The LXD,” which managed to pack everything from ballet to parkour into less than ten minutes each episode. Now “The LXD” is back with the trailer to their second season, and a new tag line: “You’ve met the heroes…now meet the villains.” Where the first season focused on introducing the good guys like Elliot Hoo (Harry Shum, Jr.), this season will feature the villains—and it looks amazing.
Set to premiere on Oct. 27, season two has more ensemble work and powerful choreography than the first, as well as some stunts that look no less than fantastical. The next set of episodes looks creepy, heart-pounding and even more visually awe-inspiring than before. It’s no surprise that the first season attracted 10,900 followers on Twitter and 59,000 “likes” on Facebook—and their fans keep on growing. They won us over with the heroes, so let’s see what these villains can do.

0 Replies to “Sneak Peak of ‘The LXD’ Season Two: Meet the Villains”