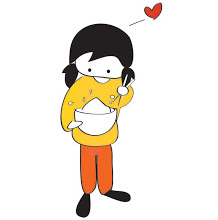 Chloe and Eileen are the masterminds behind the blog Kool Asian Kids—and no, it isn’t a Kardashian spin-off. Instead of a reality TV series, their sisterhood bond, savvy, and smarts have brought them together to start their own blog. The two sisters, who attend seventh and tenth grade in LA update their blog with photos, videos, and essays chronicling their lives on the West Coast. As their blog has grown, they also cover celebrities, food, and events surrounding Asian American culture.

Their blog was first inspired by them changing schools this past year from a racially balanced public school to a primarily white private school on the west side of the city. They saw Kool Asian Kids as a way to share their views with their peers who were not familiar with Asian American culture. The sisters said, “We feel that we should be the ambassadors of Asian American culture to our new school friends.”

(a Bollywood interpretation of Jane Austen’s classic), celebrities such as Lijie Yang and Jeremy Lin, and different tongue-sizzling types of ramen noodles. Eileen hopes the blog will “introduce those deprived non-Asian American kids to all the aspects of cool Asian culture that is becoming more and more mainstream in the United States and the world.”

Chloe and Eileen also utilize Kool Asian Kids to write observations of their experiences attending their first Bar Mitzvah and eating Ethopian food with their hands. Chloe, says, “I guess we also aim to give people a good laugh, because we do have some pretty random posts about things we find funny.”

To learn more about Chloe and Eileen, also check out their personal blogs. Chloe has a restaurant and art review blog at coolrice.blogspot.com, and Eileen’s personal blog can be found at  belowtheasianstandards.xanga.com

0 Replies to “Meet the Kool Asian Kids: Chloe and Eileen”