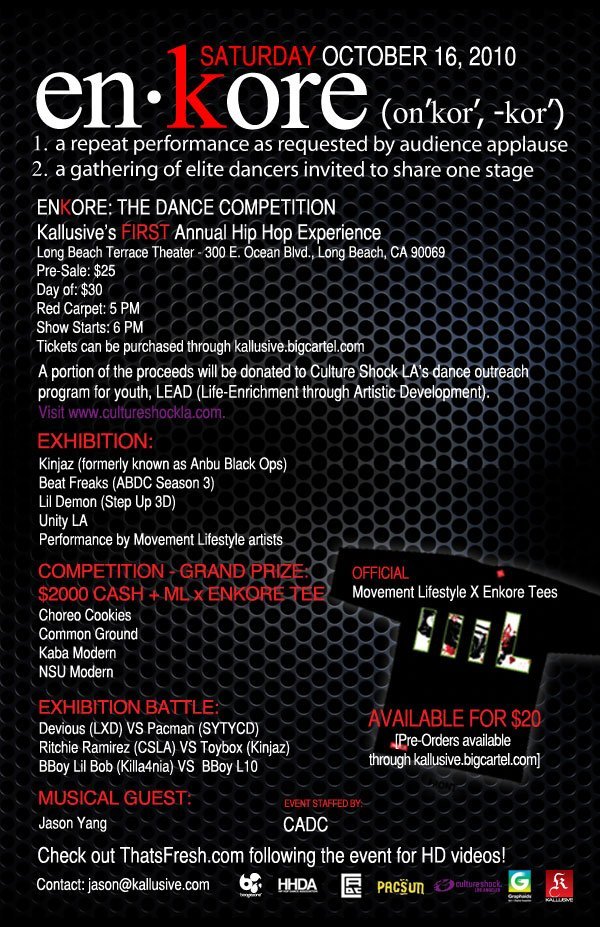 Fashion meets dance at Enkore, the first annual hip-hop dance competition hosted by international clothing company Kallusive, LLC and the director of VIBE Dance Competition. If you live in the Long Beach, Calif. area, you won’t want to miss this exclusive hip-hop dance showcase on Saturday, October 16 at the Long Beach Terrace Theater. In fact, it’s so exclusive that each dance act was accepted by an invitation-only basis.
Some of the amazing performances will feature top dance crews like Beat Freaks from season three of MTV’s America’s Best Dance Crew and Kallusive’s Kinjaz, directed by Mike Song and Anthony Lee.

Pre-sale tickets are available now for $25 each at kallusive.bigcartel.com. A portion of the ticket and merchandise sales will go to Culture Shock LA’s after-school dance outreach program, which was shut down due to budget cuts. For more information, visit kallusive.com.

Check out the trailers below:

Kinjaz – Project by Anthony Lee and Mike Song. Kinjaz will be the headlining performance.

Mochi is a media partner for ENKORE.