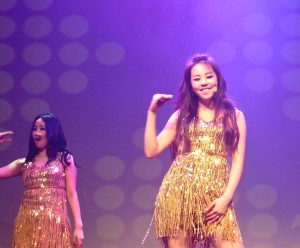 There’s no doubt that Korean pop culture (affectionately called K-pop) has become an international phenomenon. It’s gaining popularity in American pop culture, with enthusiastic fans such as Perez Hilton. For Asian American teens, the luring quality of K-pop runs a little deeper. As Facebook and Twitter feeds run rampant with the latest buzz on SNSD, Big Bang or 2PM, Korean music and all the culture that accompanies it has traveled at lightning speed across the Pacific to influence both Korean and non-Korean American teens alike.

For one, K-pop has helped Korean American teens stay connected with their heritage. Lois Lee, a 17-year-old Korean American from the San Francisco Bay Area, uses K-pop as a way to practice her Korean. Since reading Korean newspapers and novels can be difficult for Asian Americans whose primary language is English, Lois finds it easier to practice by listening to K-pop and watching television interviews of her favorite stars.

“On TV shows, K-pop stars do try to aim their language to make it more formal (no slang) and easy to understand. So I pick up a few words here and there. It’s easier to form sentences when you listen to a language for longer [duration], and what better way to do that than to have fun with TV shows and songs?” said Lee.

The global interaction of K-pop has also become a way for Korean Americans to relate to Koreans from the “motherland” halfway across the world. Last year, when the news broke about K-pop boy band 2PM’s loss of their lead singer, Asian American heartthrob Jay Park, girls in America and Korea alike mourned together through online forums and discussion groups.

Watching stars both on and off the stage through YouTube videos has also helped Korean American girls keep up with the latest fashion trends in Korea, be it thick winged eyeliner or the latest twist on fake glasses. This continued connection, something that is not so readily found with many other first-generation immigrants and their native countries, helps explain the fierce loyalty that many Korean American teens express to their native Korea.

What sets K-pop apart from the rest is the fact that it is able to attract a substantial non-Korean following as well. For 17-year-old Chinese American Lucia Lin, who is also from the Bay Area, K-pop was an introduction to Korean culture.

“Ever since I’ve been following K-pop, I’ve been watching countless [Korean] dramas, eaten a variety of Korean dishes both at home and in restaurants and really began interacting with many more Korean friends. I’ve even been told that I act Korean,” said Lin, who is planning to visit Korea for the first time with friends next summer.

Lin finds K-pop appealing because it exhibits a combination of singing and dancing that she finds lacking in American performers. As for the language barrier, Lin finds her way around Korean culture with the help of subtitles, translators and Korean-speaking friends. However, Lin does admit that sometimes there are clashes between her Chinese American heritage and her love for Korean culture.

“Ever since I’ve been following K-pop, I’ve become more disappointed in my own nationality, especially since China has no reputation whatsoever in the entertainment industry,” she said.

For other non-Korean teens who follow K-pop, the culture clash is less of an issue. Richard Yu, also age 17 and living in the Bay Area, said “K-pop is somewhat similar to my own culture already. Taeyang’s songs, although in a different language, are not that much different from the raps of Jay Chou.” But he, like Lin, prefers K-pop to American music, as he feels that each Korean pop song and group is unique.

K-pop’s influence on both Asian American teens is not without its faults. The Korean entertainment industry’s focus on beauty and appearance has made teens, such as Lin, more focused on appearance and fashion, and the prevalence of plastic surgery among the model-like pop idols has conditioned many teens to think that beauty requires plastic surgery.

Lee said, “People doubt that [celebrities] haven’t had anything done, because all stars have had ‘touch-ups’ in some places.” There are, however, some groups that are breaking that stigma. During a televised interview with female pop groups this July, 4Minute’s Hyun-a claimed that none of them had ever gotten cosmetic surgery. On the flip side, LPG (during the same interview) claimed to have 27 procedures done between the five girls. Oddly enough, 4Minute seemed to receive more negative feedback, with the show’s host joking about how plain they all looked without any makeup.

Despite the materialism of the Korean entertainment industry, K-pop’s influence still produces a positive influence on teens. For one, most Korean music has clean lyrics and positive messages—you are far less likely to find songs about partying, drinking or hookups. Both Lee and Lin agree that from an American teenager’s standpoint, Korean music videos and on-stage performances feature cleaner dance moves and less revealing clothing. Unlike American pop stars, K-pop stars are constantly promoting their music with frequent live stage TV performances, endorsements and interviews.

As Lee sees it, “because they get bad rep if they do anything inappropriate, they are more careful with what they do and say.” This industry standard for having a clean, more conservative image is in part because of the Korean culture and its stricter censoring, limiting the content of many songs and videos in Korea. Popular singers like Rain (Bi) can have their lyrics censored for having “magic stick” in his lyrics, while in America, artists can have a whole song dedicated to the subject.

As a Chinese American teenager surrounded by K-pop obsesses but not entirely obsessed myself, I’ve been able to witness the passion that so many people have for music from a country across the world. This summer, when the Wonder Girls and 2PM came to San Francisco on tour, thousands of Asian American teens flocked to the concert, some waiting in line for hours just to take pictures with the stars. There are times where I complain that this entire K-pop craze can get annoying, but ultimately I think it is a positive, if unexpected, influence on the Asian American teens around me. That, and the fact that the tunes are just so damn catchy.