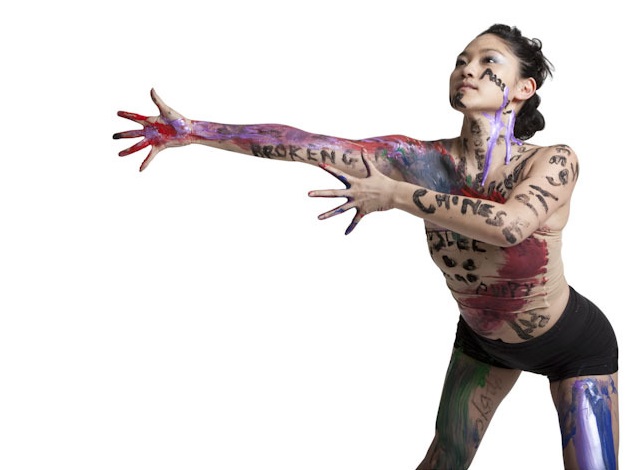 For Jessica Chen, dance has always been more than just a hobby. It was her voice growing up as a shy child. When words failed, the art form allowed her to understand ideas better and find what she wanted to say.

“There can be emotions or feelings articulated through movement that I haven’t quite found the need to speak out loud. And I’m okay with that,” Chen shares with Mochi.

Chen moved to New York City in 2006 to pursue a career as a professional dancer. Since then, she’s been through it all, from auditioning and performing for other choreographers, to submitting pieces for dance festivals and choreographing her own shows. In 2008, she started her own dance company, the J Chen Project. Through every stage, she honed her skills as a choreographer and storyteller.

“I create dances to help me understand things,” Chen says. Her efforts shine in “The Shadow and The Like,” a show she directed and co-choreographed.

In this show, which ran through the fall in New York City, Chen explored the darker side of the digital world using dance. It delved into topics like the serious emotional impact of the number of likes you get on a Facebook post.

“Let’s say you post something that you put your heart and soul into, and you see it doesn’t get that many likes. Does that make you feel like it’s not that meaningful?” Chen says. “This topic was most pertinent to me to open up the dialogue. My goal in all of this is to shine a light on that [feeling] and understand it a little bit more.”

In creating this show, Chen was also influenced by ESPN’s “Split Image,” which tells the story of Madison Holleran, a student and star athlete at the University of Pennsylvania who committed suicide in 2014. Although she was clearly hurting on the inside, Holleran’s Instagram projected an image of a successful, vibrant woman. Even her own family didn’t know the extent of her unhappiness.

“She had the world at her fingertips. That’s what she projected and that’s what you saw,” Chen says. “There’s [this] split image that we have: the thing that we post on social media becomes an image, becomes who we are, and yet there’s so much that we don’t share on social media.”

Around the same time that Chen read about Holleran, someone in her neighborhood took his own life. Though his close friends knew he was struggling, Chen was completely shocked and said she always thought he was happy based on what he posted on social media.

All of these incidents made the dancer think about the gap between what people present online and what’s really going on behind a photo. Thus, “The Shadow and the Like” was born.

“The social media realm, that’s something we don’t quite have words or more descriptions for just yet,“ Chen says. “Dance has always been a way for me to understand and process everything, to physicalize certain stories.”

Chen and three other choreographers tackled ideas about body image, Twitter battles, and the concept of following and unfollowing in order to translate them into dance. The style is mainly contemporary, although ballet, multimedia, and spoken-word elements come into play. In the piece about online feuds, for instance, they took notes from fight choreography and martial arts to literally create a battle between two dancers where their aggression swells and swells until it spirals out of control–much like it often does on Twitter.

Chen hopes the show, her response to Holleran’s tragic story, will contribute to the larger conversation about social media.

“Everybody has their own unique story with social media, so when they come to the performance, they’ll hopefully connect with it in some way,” Chen says. The most important part—regardless of how the audience might react to her work—is that “they know that they’re not alone.”