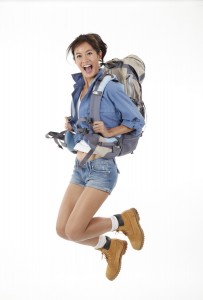 Taiwanese American Janet Hsieh has a job most girls would die for—she travels the world, visiting exotic locales and trying fine foods. As the host of Discovery Travel and Living’s Fun Taiwan, which is broadcast to 25 countries throughout Asia, Hsieh introduces audiences to the island’s attractions—both of the tourist and off-path variety—and wins them over with her charming personality and daring attitude. Due to the success of the show, Hsieh has broadened her horizons and is now taking on all of Asia as the host of Fun Asia, which began filming in 2008.

While Hsieh is well-known across Asia due to her TV shows and recent book, Traveling with 100 Toothbrushes, she is also beginning to make her presence known in her home country—the U.S. Among Taiwanese American circles, she is beloved for the very reasons she appeals to Asian audiences—her spunky attitude, adventurous personality and, of course, good looks. Recently, she was the closing keynote speaker at the 2010 ITASA Conference at her alma mater, MIT, where she shared her experience of stumbling into her dream job and exploring Taiwan.

Born and raised in Texas, Hsieh had never visited Taiwan until she graduated from MIT. Growing up, she considered herself more Taiwanese than American, and so figured living in Taiwan would be simple. But even though she has lived all over the world—Ecuador, Argentina, France and India to name a few—she found living in and exploring Taiwan to be one of the most fascinating, as well as challenging, experiences of her life.

After arriving, she was often frustrated. “People would consider me an idiot because I was not fluent in Taiwanese and my Mandarin, at the time, was limited,” she said. “But, living here has given me an incredible opportunity to learn about my identity.” She also noticed how the stereotypical Asian female archetype—docile, pale and skinny—was highly esteemed in Taiwan—a discernible difference from the strong, independent type she aspires to be and is so touted in the U.S. 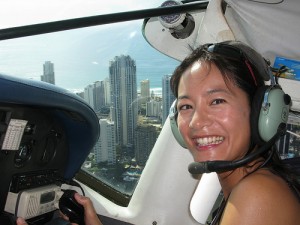 She admitted, “I got sucked into being a girly girl, but with Fun Taiwan, I showed people that it is OK to be a healthy, adventure-seeking, outdoorsy girl.” In time, Hsieh has become particularly successful at differentiating herself from many of Taiwan’s celebrities, pouring her love of the outdoors and outgoing personality into a much-coveted, fun and dynamic job.

Although she has always loved traveling, Hsieh did not plan to be a TV host of a hit travel show. When she first became a host, she constantly sought ways to improve herself, looking to Samantha Brown and Anthony Bourdain for inspiration and admiring their natural on-camera personalities and ability to be themselves.  She has come into her own, conversing easily with locals and working seamlessly between English and Taiwanese with a can-do attitude.

While she does not formulate the creative direction of the show, she is an active contributor, helping to decide locations and improvise voice-overs.

She has particularly enjoyed visiting theouter islands of Taiwan, considering them “a little escape from reality.” With the aboriginal culture largely untouched and all the comforts of being on an island, Hsieh often seeks refuge on the outer islands. Outside of Taiwan, she raves about Fiji for the diving and Queensland, where she skydived and flew a sea plane, for an adrenaline rush.

While Hsieh once dreamed of being a doctor to change the world, she now leverages her celebrity status to give back to the global community and spread awareness of issues close to her heart, such as human trafficking and international children’s issues.

Hsieh advises teenage girls who wish to follow in her footsteps to work hard and reminds them that being a celebrity is temporary. Looking back, she said, “I wouldn’t change any experience—good or bad—even during my really low moments. In a way, those moments have made me who I am today.”