We sat down recently with Andrew Ahn, the writer and director of Spa Night, and Joe Seo, the film’s lead actor, at Village East Cinema in New York City during the 2016 Asian American International Film Festival (AAIFF). The feature was the festival’s opening night film. Spa Night is the story of a young Korean American, David, who realizes his sexuality while taking a job at a Korean spa in Los Angeles.

Andrew: I had a short (Dol) at the Sundance Film Festival in 2012, and at the festival I met with someone from the Sundance Feature Film program. I had this idea about the Korean spa, and I just kept in touch with him, and started really writing that screenplay in 2012 and then submitted to the Sundance Screenwriters Lab and got in. The Sundance stamp of approval really helps attract actors and crew and collaborators.

Joe: I was doing some work in Asia; in Korea, Japan, and China. So I came back and within a few months, I was just kind of searching for the next gig and I came across Andrew’s script—it was a side, and I thought it was a pretty interesting concept, because there wasn’t anything like that in the U.S., in the American market, this story with Asian Americans in it. Once I read the whole script, I fell in love with it. I couldn’t believe this stuff was being made in America and, the whole reason why I went to Korea, and Asia, was because of the roles here. So when I did come back it was so refreshing.

Andrew: The casting process was really complicated. It wasn’t just the fact that we were looking for an all Korean cast, it was also that we wanted Korean language speakers, and then we also needed actors who were comfortable being part of a queer film, and those three criteria really shrinks the talent pool.

And the parent roles—we looked in LA, and the people who came in to audition kind of fell into two camps: it was either experienced actors who couldn’t really speak Korean, or it was non-actors who spoke fluent Korean, you know, and both have issues. And I really felt like we needed people who could carry the emotional weight of these characters, and could speak Korean so that we could screen this in Korea and people wouldn’t be like ‘what is this American movie that’s making fun of Korean people’? And so we ended up casting two actors from Korea [Haerry Kim and Youn Ho Cho who play David’s parents], they’re primarily theater actors, and also acting teachers.

The lead character was really concerning for us, and we tried to find the right actor who could really bring to life this very silent character. When Joe came in to audition, I just thought that he was so compelling. There was a young man who auditioned for the role of David, and he told his mom what the project was about, and his mom told him that if he took the role, she would send him back to Korea to lay low for awhile because the Korean American community would be upset at him. And all these things were so frustrating, but ultimately I think we landed on the right actors, and I’m so happy with the performances.

MM: Were there any fears you had in producing this project, Andrew, or Joe, in taking on this character?

Joe: No fears; I thought the message was clear, and it was great. I just wanted to double check with my parents, and I go to church so, [checked] with my pastor. My parents said ‘Do your best.’ I thought that maybe they would object, maybe. They also go to church, and they really wanted me to do this. And that’s pretty much all I needed. Also my pastor, those are two important parts of my life. And I asked my pastor [and he said], “You think you could do it?” That excited me to get that support from these two places that I cherish in my life.

Andrew: I think for me, there’s always concern that there would be some sort of backlash from the Korean American community, but that was something that I felt would be productive, if it got people talking about what it means to be queer and Korean American, that would be a healthy thing. So the fear was never the backlash, the fear for me was ‘Oh, could I pull this off? Can I make it in a way that it was compelling enough so that even if someone who is homophobic could watch it and at least respect this human being for this struggle, and relate to this human being for caring for his parents? This has to be a movie that can convey a sense of humanity. 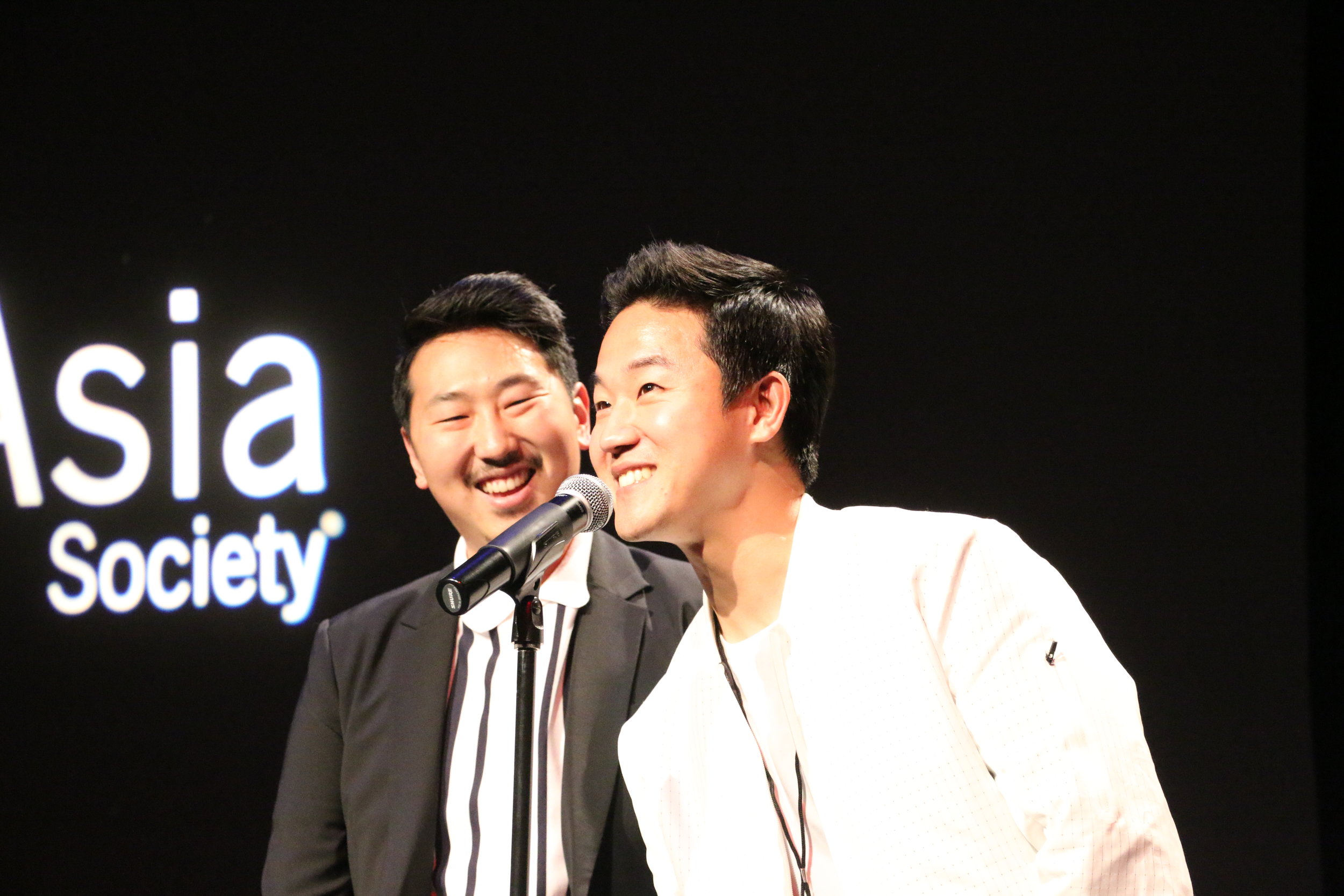 MM: What were some of the biggest challenges in production?

Joe: Honestly, for me, it was emotionally draining. Just the interactions with the parents, the relationship with the parents, it hashed up old scars that I personally have. It was so relatable to my own life that, you just don’t want to remember some stuff. There’s just some things that really tough. It just kept on scratching at it. There was one time where I just finished a shoot and I had some baked goods from our set, I was giving it out to some homeless folks, it was really just for myself, too, I needed to talk to other folks that are completely different, not Asian, just completely different. I just needed that time to unwind, just sat on the street for hours, just chilling, talking.

Andrew: I wrote the screenplay knowing I was gonna get at stuff that made me uncomfortable. There’s a scene at the Doljanchi. [doljanchi, or dol, in traditional Korean custom, is a baby’s first birthday, during which objects are placed in front of the baby, i.e. a paintbrush, money, etc. The object the baby grabs signifies the baby’s future.]

I can’t deal with doljanchi. I made a short film about it, and that ritual for me is very, its loaded. And I, as a gay man, I think about if I have a child, and this child isn’t biologically my own, and isn’t Korean by blood, will I have my doljanchi for this baby, and will my parents love this baby in the way that they would love a baby that looks like them. There’s that scene where David sees his parents playing with that baby outside. That killed me. And what also killed me was that Joe really got it. He understood what was happening in that moment, and I just had this kind of really overwhelming reaction to it. But again, I was kind of expecting it.

Joe: I think we both broke down on set.

Andrew: I think I made the movie sprinting and screaming. You just kind of have to go and go for it. And there’s something about that attitude that kept me going.

MM: There’s a moment in the film when David asks his parents what he picked during his first birthday, and his parents don’t remember. What did he pick? I was dying to know.

Andrew: That was from my real life, actually, when I was doing research for Dol, my short, I asked my parents, ‘what did I pick?’ They were like, ‘oh we don’t remember,’ and that’s actually part of Korean culture and ritual that I’m interested in. Sometimes the thing that‘s most significant seeming, the thing that’s supposed to show what your child supposed to be in the future, is less important than the ritual itself. It’s just important that they do it, but what it is, kind of doesn’t matter.

MM: But I was dying to know.

Andrew: So I’ll tell you what I picked. Basically my parents couldn’t remember; we found the old Beta tape and watched it, and I picked the string. So, it means long life.

MM: What are some of your upcoming projects?

Joe: I just finished a film called “Over, Under, Through,” a short film. Raphael Sbarge was the director. It’s also an Asian American story. This year a movie called “Message From The King” will be coming out, that’s with Chadwick Boseman, and that’s something I’m happy about. I’m still looking for another project that’s just as good, and stories for Asian Americans.

Andrew: I’m trying to finish up stuff for Spa Night, we have our theatrical release in New York on August 19 at the Metrograph and we’ll be screening theatrically in LA August 26, and if it does well it’ll expand to the other cities.

Joe: It actually means a lot if a lot of people could watch this, because the message is so good.

Andrew: I’m juggling a few things that I’m dying to tell people but I can’t talk about. Some projects are Korean, some are gay, some are both, some are neither.