Home EntertainmentHot Men and Haikus: This Is One Dream Combination You’ll Want to Proudly Display 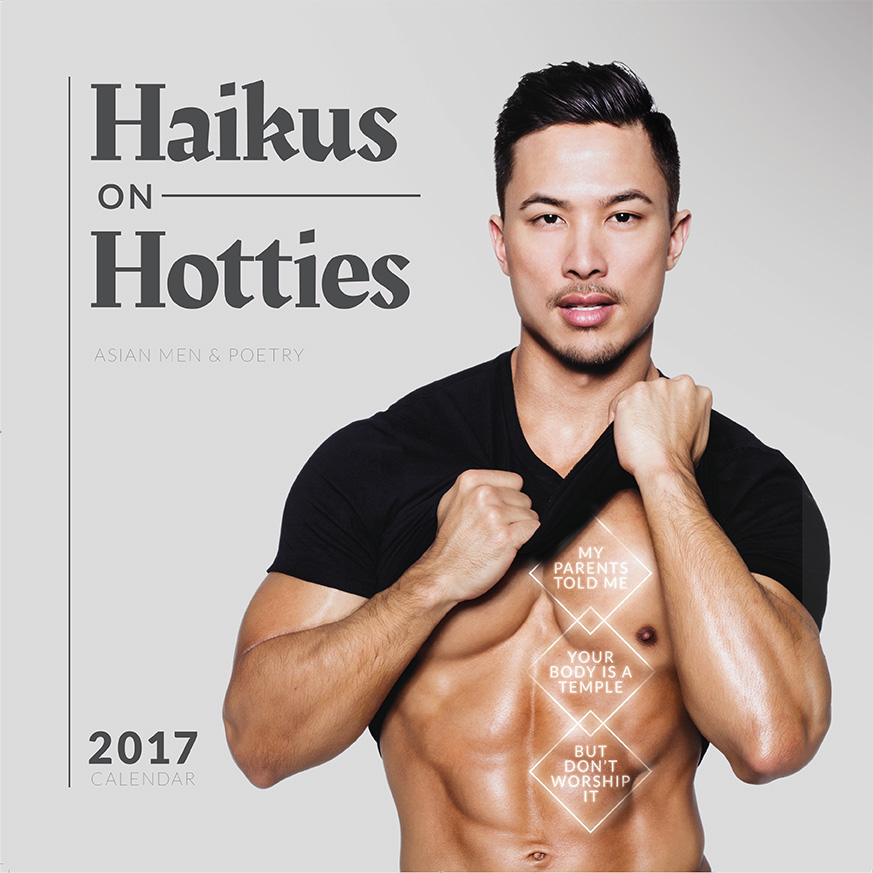 Ada Tseng never thought her idea of a calendar filled with hot Asian men would actually come to fruition. But two full successful fundraisers later, she’s proven herself wrong with Haikus With Hotties.

Tseng’s original idea for a calendar featuring 12 Asian men with an accompanying haiku for each month formed when she was dealing with scheduling conflicts with The Mortal Instruments’ Godfrey Gao. What was supposed to be an in-person interview for an Audrey Magazine series turned into an email correspondence and Tseng wanted a creative way to deal with the change of plans.

“I thought it would be nice to get thoughts from him through written word. I thought haikus were short, simple, and have Asian roots,” Tseng explains. “I pitched the idea to him and, to my surprise, he liked the idea of exchanging poetry.”

After six or seven similar interviews with other Asian American actors, Tseng had the idea to compile the poetry and pictures into a monthly calendar. Although initially skeptical, she put up the project on Kickstarter with a modest goal of $1,000. Surprising even herself, Tseng reached her goal in less than a week.

With plenty of public support, including a feature on NPR, Tseng and her team published the first Haikus With Hotties calendar for 2016. Following the success of their first edition, her team decided to go again for a second round for 2017, but with a twist. This year, the haikus don’t just come with the men—they’re actually on the men.

What started as a joke on the double meaning of their calendar name quickly turned into a project of its own. Like in the original version, the featured men, including model Justin Kim and radio host Sean Rameswaram, were told to write their own haikus with one rule—the verse had to be about “hotness” in some form. Then, the text was “hidden” somewhere in their portrait. While some are blatantly printed on their bare chests, others are more cleverly hidden.

Tseng’s team is doing one more thing differently with this year’s Haikus On Hotties—note the slight change on the name—all profits will be donated to popular website Angry Asian Man.

Phil Yu, the brains behind the outspoken blog, was pivotal in promoting their Kickstarter. He’s also someone that Tseng sees as a champion for the Asian American community.

“We really respect the work that he’s done for the past 15 years,” Tseng says. “He’s a representation of somebody that gives all kinds of Asian American voices throughout his blog. And besides, Phil is a hottie too.”

The site’s founder fits right into Tseng’s goal with Haikus On Hotties—to display the men’s hotness, and not just in the traditional sense.

“We want to showcase differing opinions of what hotness is,” Tseng says. “Our calendar doesn’t just have all shirtless men. We have a Pulitzer Prize winner and we have singers, chefs, and personal trainers. We’re showing Asian American men are hot and that they are attractive in all these different ways.”

To achieve diversity in hotness, Tseng and the Haikus With Hotties team undertook the difficult task of handpicking the 12 lucky men. “We actually spent a lot of time picking out who we wanted and trying to make sure that people were not all East Asian,” says Mai Nguyen, Haikus With Hotties’ media representative. She adds that this year’s calendar features two LGBTQ-identifying individuals.

“Historically, there’s been limited ways that Asian American men have been portrayed on screen,” Tseng says. “It was important for us to have them represent themselves as opposed to represent what they were supposed to be.”

At the moment, there are no plans for a 2018 calendar. However, the team always has their eye out for their next January man.