Home Entertainment“Everything Everywhere All At Once” Is Sublime 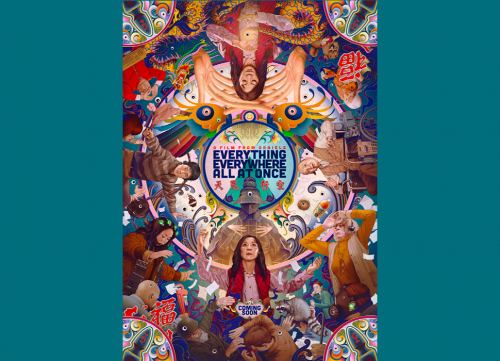 Ever feel as if someone reached into your very being, stole a piece of your soul, and blasted it publicly so that anyone and everyone could examine your viscera at their leisure? Well, “Everything Everywhere All At Once” does exactly that.

Premiering March 25, A24’s “Everything Everywhere All At Once” is the latest movie by filmmaking duo Daniel Kwan and Daniel Scheinert (collectively known as the Daniels). A maximalist film, it cranks the plot, visuals, and cinematography up by not one but a million notches. As a viewer, all you can do is let the absurdist human chaos explode and wash over your overwhelmed brain.

Picture this: Evelyn Wang (Michelle Yeoh) is an exhausted Chinese American mother just trying to make it through an IRS audit by Diedre Beaubeirdra (Jamie Lee Curtis), when all of a sudden, her goofy husband Waymond (Ke Huy Quan) tells her she is the key to saving the multiverse from the Big Bad: Jobu Tupaki.

What is this movie about?

Truthfully, this review is particularly difficult to write because there are just so many big ideas in this movie that it quite literally is everything, everywhere, all at once.

“Everything” is simultaneously about the big issues of existential dread, the immigrant experience, motherhood, invisibility, generational gaps, queerness, ADHD/neurodivergence, nihilism, and all the liminal spaces in between. It’s about exploring the choices not made — the could have beens, the regrets, and what happens after you f— around and find out. It’s about love. It’s about kindness. It’s about not being much good at anything at all.

It’s also a story of a frazzled and bewildered wife/mother/immigrant/small business owner/woman who doesn’t understand her husband or daughter and could really just use a well-timed nap.

When I saw the trailer back in December, it left me almost in tears and at the same time wanting to scream because holy f—ing shit Michelle F—ing Yeoh is the lead in a quirky, sci-fi fantasy, and it’s weird and hilarious and soul-stirring and topsy-turvy and like nothing Yeoh has ever been in before.

“I saw this amazing opportunity to play a mother that we all know so well,” Yeoh told me. “It could be your auntie, your grandmother, or someone else. These women have been the crux of society, but at the same time, no real story has been told about them — let alone letting them be a superhero. This was just the most beautiful opportunity.”

This fact is unquestionably why I’d anticipated “Everything” so very, very much — and also why I was worried the movie wouldn’t live up to the hype after that almost perfect trailer.

“I really want to be thankful to these two evil geniuses who had the audacity, the fearlessness, to write a script like that for an older non-Caucasian woman,” Yeoh said in a panel after the San Francisco premiere of the movie. “It seems I spent the last 37 years of my career working towards this film.”

For Quan, who shot to fame as the child star who played Short Round in “Indiana Jones and the Temple of Doom” and Data in “The Goonies,” it took 20 years behind the camera before he stepped into another acting role — because of the lack of opportunities for Asian American actors. It wasn’t until he watched the phenomenal success of “Crazy Rich Asians” that Quan returned to acting after this 20-year hiatus.

“[It] proved how important it is not just for Asians but for every group to be represented in entertainment. Until you see it, you can’t imagine that it can also be you up there on screen,” Quan explained.

And represent “Everything” does — not only in the sense that the film features a Chinese American family, but that it also speaks on the universal through the highly specific.

All those themes mentioned earlier? One can absolutely review the film from any of those angles and not even begin to scratch the surface. The best part is: The Daniels didn’t set out to make a movie specifically about the immigrant experience or queerness, and yet, “Everything” works as a metaphor for all these experiences that our society renders invisible.

“We start with the big ideas, and we build the world. We build the maze. Then, we just start dropping rats into the maze and just see what happens,” said Kwan regarding their process. “A lot of that stuff came out after we dropped the rats. Then, we saw how they crawled through the maze and we rearranged the maze based on what we found.”

“There’s something very therapeutic about chasing an image that speaks to us and finding out along the way what it means to us. Like going in without too much of an agenda, and sometimes it leads to — it makes the entire process surprising,” added Scheinert.

Beyond the plot and metaphors — which, in case you can’t tell, are prime — the actual acting and filmmaking are superb.

Given the multiplicity of timelines and universes and characters (played by the same actors), the film could have been a confusing morass. Instead, thanks to the deft direction of the Daniels and stellar acting by the cast, the storytelling is clear and comprehensible. The pacing is on point tonally, and just when you think you can’t take any more, whether emotionally or sensorially, you’re given a temporary reprieve.

Not only do the Daniels delineate each universe with distinct color grades, but the costuming by Shirley Kurata are helpful markers to guide the narrative, ranging from the fantastical and surreal to the drab and mundane. The Hong Kong style action sequences — be prepared for a magnificent fanny pack fight scene featuring Quan — are perfectly suited to the style of the movie. In what is perhaps the most impactful moment of the entire film, the scene is entirely silent and both fatalistically hilarious and despair-inducing.

Of course, none of these guideposts would matter if the cast weren’t up to the task of playing multiple iterations of their characters.

Yeoh — who we normally think of as a regal, stylish BAMF — transformed her body to embody Evelyn, a woman who has been beaten down by time and taxes. “She doesn’t take care of herself. She’s haggard,” expressed Yeoh. “I worked on that walk for a while because I see these women who carry heavy loads — not just physical, heavy loads, but invisible loads on their back — and they never stand up straight.”

To prepare for the three versions of Waymond, Quan went as far as hiring acting, dialogue, voice, and body movement coaches.

“From the very get-go, I knew that it was important that the audience is able to distinguish Waymond, alpha-Waymond, and CEO-Waymond, just by how they sound and how they walk,” said Quan. “My body movement coach would read the script and he would pick specific animals for the different versions. For Waymond, he picked a squirrel so I would spend countless hours watching videos of nothing but squirrels.”

Hands down, Stephanie Hsu, who plays Evelyn’s daughter, is the breakout star of “Everything.” Lesser mortals would likely have crumbled in the presence of acting legends Yeoh, Quan, Curtis, and James Hong, but Hsu was outstanding as she showcased her incredible range. There is a hallway scene (you’ll know it when you see it) that is alternately chilling, hilarious, and poignant that only works because of Hsu’s skill at navigating her character.

It could be too much, but it’s just right

What makes “Everything” credible despite its many forays into the ridiculous is how even the most bizarre situations are grounded in the deeply human.

Evelyn’s occasional malapropisms and portmanteaus of the English language remind me of my own immigrant mother. The awkward affection and exasperation between Evelyn and Waymond is reminiscent of my own marriage. The head-bashing frustration of being audited by the IRS is accurately irritating.

It’s this grief and desire to be seen — and not only seen, but understood and accepted — that is splashed all over “Everything” in all its messy splendor.

During these chaotic times for Asian Americans, Yeoh’s words especially resonate: “When you feel like it is too much, [like] ‘I’m going to crack — my head is going to crack,’ [but] at the end of the day, we don’t crack so easy. We are all survivors. We all love our family. And we don’t give up on each other.” 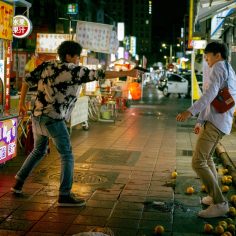