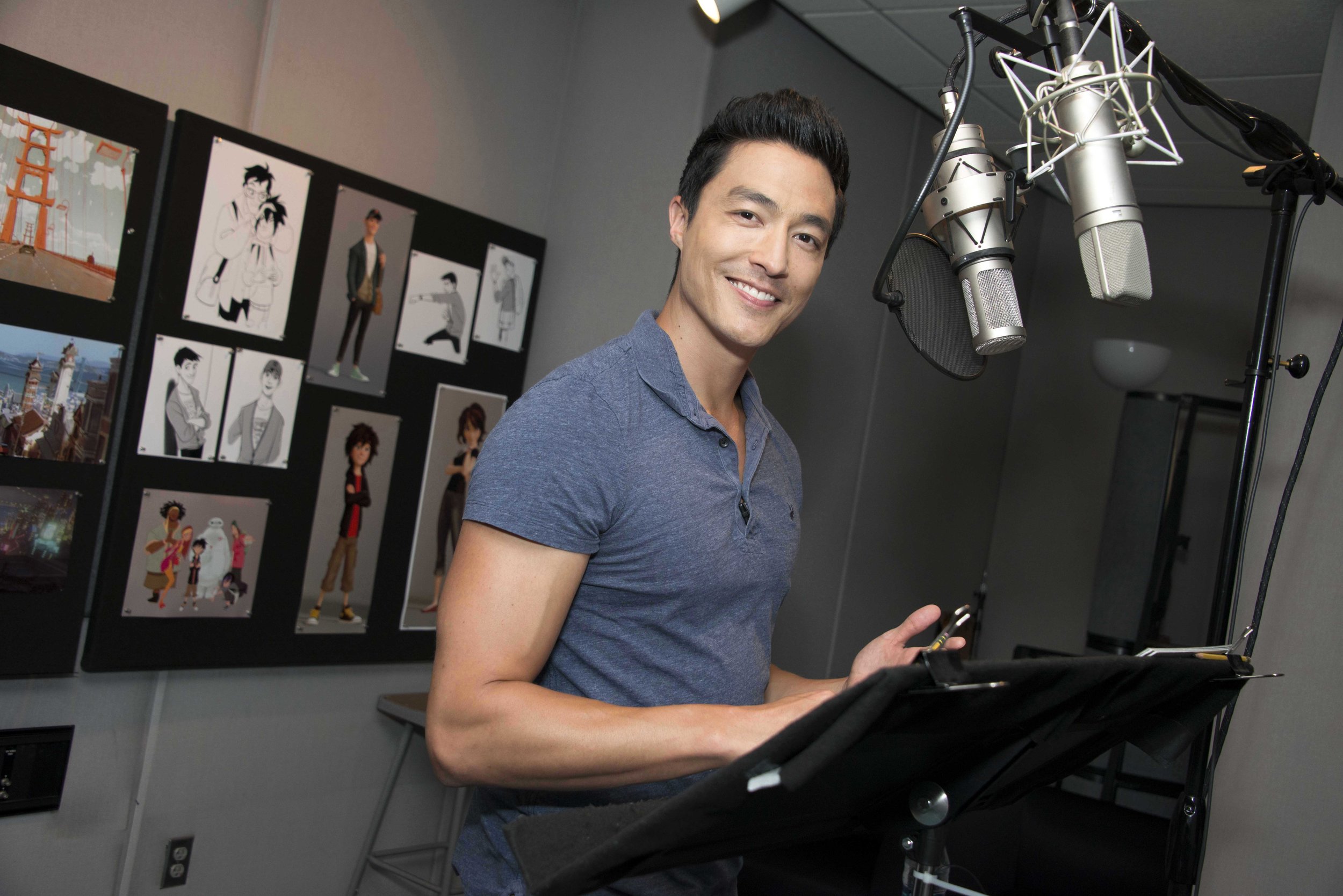 We have DVD copies of “Big Hero 6” to give away to three lucky Mochi readers. Just fill out the Rafflecopter below!

Earlier this year, “Big Hero 6” took home the Oscar for Best Animated Feature. Having first premiered at the Tokyo International Film Festival last year in October, this story of a group of San Fransokian student scientists-turned-superheroes and a healthcare robot named Baymax has made more than $521 million (and counting!) worldwide. In the midst of all the excitement about a major studio film featuring Asian Americans winning a highly recognized award, Mochi magazine got a chance to chat with voice actors Ryan Potter and Daniel Henney (who voiced Hiro Hamada and his older brother, Tadashi Hamada, respectively) about their reactions to the win and their thoughts on the film.

1. “Big Hero 6” won Best Animated Feature! How did you feel when it was announced? How did you celebrate? Ryan Potter (RP): Quite honestly — I’m very confident in the film and very proud. It’s the Oscars. You just don’t know what’s going to happen and, realistically, you have a one-in-five chance of winning. You’re nominated against some really amazing films. I was confident in [Big Hero 6] but I was unsure of us winning or not, so when we won, it was just an absolutely unreal moment! I was sitting with the cast of Big Hero 6 — you’re supposed to be polite, but we were we on our feet screaming — we were the loudest people there. It was a very honest and visceral reaction.

Daniel Henney (DH): Yeah it’s pretty surreal, I can’t even believe it happened. Unfortunately I was working for a shoot for a TV show in San Pedro, so I was in my trailer watching on a makeshift TV, and when I heard about it, I started jumping up and down like a four-year-old and screaming and then the calls started to coming in. First one was from my mom who was trying to FaceTime me and I was trying to explain to her that I didn’t have WiFi and she wouldn’t get it, so it was 20 minutes of her trying to FaceTime me and then when she got through, she was screaming and it was really beautiful moment. It was very humbling.

2. What do you think played the largest role in the film’s big win?

RP: “Big Hero 6” is different. I know people say their films are different, but [Big Hero 6] really is different — the first one that stars multi-ethnic characters at its core. It’s the first animated film I know of that blends a Japanese and an American city — at the heart of it, it’s a little-brother-big-brother story — and the animation quality is unmatched, as well the rendering they used. Hyperion is phenomenal. No animated film has been able to capture the light that Big Hero 6 captured. I don’t want to sound like I’m bragging, but I’m so proud to be part of this film and the success lands on everyone who worked on it. The editing, storyboarding, and production design was phenomenal. The combination of San Francisco and Tokyo is seamless — everything in the movie is seamless.

DH: There’s just so many different aspects of this movie, the casting, the amazing animation, the fact that it was hand drawn — which is very important, it says a lot about the movie. That it reached to out to all kinds of demographics. There’s no specific demographic for this film. I know people — for example, my parents. It was my dad’s first 3D movie and he cried during it. I saw four- or five-year-old kids playing with Tadashi action figures at airports, and — a side note, unfortunately I don’t have one. And I just think it’s everything — from the comedy, to the action, to the laughs — it’s everything about the heart of the film. It’s harder to find something about the film that doesn’t do it than does do it.

3. Many would argue that Hollywood has a diversity issue, Neil Patrick Harris dubbed the Oscars — the whitest ever. Do you think Big Hero 6 helped to sort of fill the void and address this issue?

RP: Absolutely. The entertainment industry has been the way it is for a while. George Takei and Daniel Henning have fought for the Asian-American place in the entertainment industry for many years now — especially George Takei. Some of these actors are the first of their kind to take those steps in Hollywood and the entertainment industry. […] In general, there’s diversity missing in Hollywood. There is also a limited talent pool for these different things and the most talented ones are in those countries making those films. Some of the most multi-ethnic actors go to different countries and the ones that stay are the ones that are most talented — like Arden Cho — who are cast over and over again. We obviously need more roles written — more ethnicity in general. We need more actors and actresses with the chops like Daniel Henney and Tivoroli from Grand Budapest Hotel.

DH: In terms of filling the void, it depends on how big the void is, everyone has different opinions about how big the void is, people argue about that. Obviously it’s different for someone like myself who is in the business versus someone that is not. It’s a huge conversational topic that can be talked about for weeks, months. Anytime Asians are brought to the forefront, it just helps us and in a movie like this that’s won an Oscar, in my personal opinion I can’t see how it doesn’t. One of the one most proud moments that I had about this movie — I’m from a very small town in Michigan — a town of less than a thousand people. I grew up with red barns, cows, chickens, deer hunting, listening to country music, all Caucasian — that’s where I grew up. It’s a really nice place to grow up. When this movie came out, I got a Tweet from this random family in my hometown. And it was a Tweet — they were all sitting in Pizza Hut in this small town right where the movie theater is, and it’s about 12 kids, and three or four parents and they are all Caucasians, country people. And they Tweeted, “Out to represent Carson City’s hometown star Daniel Henney in Big Hero 6.” These beautiful kids — I was just thinking about how they’re going to be going out and seeing Tadashi, and Hiro, and these Asian themes, and as a kid, I never had that, I didn’t know what […] I never said a Japanese name in my life, but now all these white kids, all these Caucasian kids, they’re going to be going “Tadashi!” That’s just so cool, so obviously it’s doing something.

4. The film has earned $521 million and counting – surpassing the box office success of “Beauty and the Beast.” How do you feel about the film’s fanbase? Did you ever imagine the film would be so well received? What do you think intrigues people the most about the film?

RP: What I love about the film’s fanbase is that all of Japan, U.K., Korea are so in love with Big Hero 6. It’s become amazing because these people from different cultures are represented. I’m so proud and grateful about how much we’ve accomplished. We’ve done so well because of our fans. I really can’t thank them enough. And it’s not just in the U.S., but people all over the world who saw “Big Hero 6” in subtitles and dubbed. And even then they could laugh, cry, and smile, and everyone fell in love with Baymax. I think it struck a chord globally.

DH: The fact that that it’s good — that’s the most important part. Whether that’s live action or animation, and I think [the animation] brings in the kiddies, you know, you have families of four coming in, instead of couples of two. But at the end of the day, the movie is just good. And people are seeing this movie three or four or five times. Some people would tweet me saying that ‘this is my fifth time going’ and sometimes I’d be like maybe you should pump the brakes on watching the movie — that’s a lot of Big Hero 6. [laughs] It happens to one of those films people love to watch over and over again and you find something new every time. I mean Baymax — you can watch Baymax all day, stumbling around the street doing silly stuff. And it’s really nice going into a movie theater and then have a pure experience and then feel good as you’re coming out like I used to when I was a kid. So that feeling, I think that’s why people gravitate towards it.