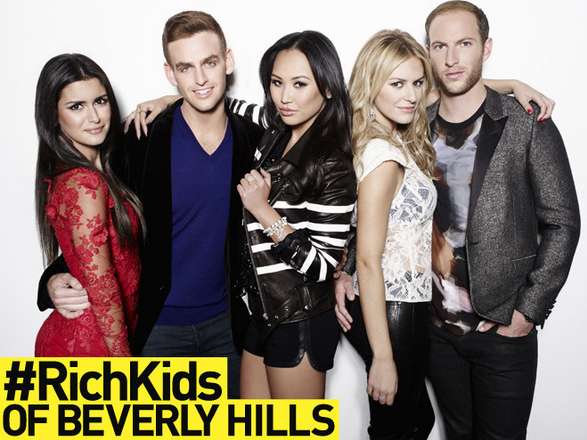 Equipped with a Hello Kitty-clad iPhone and a $3 billion family fortune, 25-year-old Dorothy Wang is “funemployed and fabuluxe,” and Instagramming every moment of it. She’s one half of the ditzy duo of #RichKids of Beverly Hills (oh yes, the hashtag is in the show title), E!’s latest reality offering that covers the world of the rich and Angeleno.
The show (basically an hour-long ad for Instagram) revolves around Dorothy and her best friend, Morgan Stewart, a fellow rich kid (natch) whose blog, “Boobs & Loubs,” spells out her priorities in life. They gab, they bake, they power shop on Rodeo Drive. And of course, they take selfies. Peppered with friends like self-proclaimed “Persian princess” Roxy Sowlaty and son-of-Magic-Johnson EJ Johnson, this one’s got all the makings of another reality guilty pleasure. Forget the recession—random caviar-and-Dom parties that cost daddy 40 grand in one night are NBD.

You’d think folks would be more hesitant by now to willingly dive headfirst into the glossy world of reality TV, where any conversation can be cut and rearranged to the producers’ fancies. (Hey, nobody wants to get the Bitch Edit.) But watching RKOBH, you get a sense that these air-headed power shoppers—products of the first generation to be brought up on social media—are stealthily self-aware.

They come armed with quips like “I think I’m somewhat insta-famous in the Instagram world,” (Dorothy), “My personal trainer fee is $1,000—I drop a lot of money to complain with her,” (Morgan), and “Do I look as bitchy in real life?” (Dorothy again, this time about an unflattering selfie).

Not quite “kids,” the 25- and 26-year-old #RichAdults are on the early end of the Millennial stretch, old enough to have watched Clueless as kids (they cite Cher and Dionne as a comparable dynamic duo), but young enough to have naturally embedded Facebook and Twitter (or maybe even MySpace?) into their lives. And definitely young enough to be impacted by the Kardashian-era of TV programming—Dorothy’s voice even sounds like an SNL parody of Kim K. The deliberate, overlapping banter and mugging for the E! cameras seem to stem from a lifetime of, well, mugging for their own cameras.

A sample of their chatter:

Morgan: Is it weird that I don’t go on Twitter? And is it weird that I did not know that you give blood, Dorothy Wang, as I’m looking at this Instagram photo of you, Chanel flats and all? What’s happening in this photo?

Morgan: I feel like that works with the chair you’re sitting in.

This was the surprisingly smooth segue into episode one’s main plot point, a blood drive organized by Dorothy herself. By her account, she started donating blood in high school to get out of history class, and it grew into a charitable habit. She enlists her friends to help, but upon discovering the archaic rule that blood banks ban donations from gay men, Dorothy’s gay friend Jonny refuses to support her cause. The argument gets heated, and as Dorothy puts it, “It got very VH1.” (Spoiler alert: The show sidestepped its opportunity to tackle the issue head on, instead smoothing it over with a half-hearted apology and compliments on eye makeup.)

Despite their lack of political awareness and abundance of selfies, Dorothy and Morgan’s friendship seems real, and their banter more entertaining than you’d expect. They’re the oft-loathed 1 percent, but they also seem pretty harmless, much like Alicia Silverstone and Stacey Dash’s characters from another time. (“Another time” being the mid-90s.) While a lot of other reality-TV ships sink or burst into flames, this one just might have legs—enough to take a season-long strut down Rodeo Drive, at least. #Seriously.

Other highlights and lowlights:

“Honestly, I’m not really sure how many Birkin bags I have. I’ve kind of lost count.” Dorothy on her up-to-$60,000 designer handbags.

“Are you crazy? That doesn’t even need a filter.” Morgan on a photo of herself while baking.

“I’m EJ Johnson. I’m luxurious, and fabulous, and bomb.” EJ Johnson on himself. (Truth. If only we could all be as comfortable as this guy in our own skins.)

“I’ve become obsessive with it. If somebody doesn’t like my photo, it’s ruined my entire day, because I feel like it’s an entire plot to not like my photo on purpose because there’s some hidden agenda that we haven’t spoken about the issue that we have, and it’s completely made me crazier than I already am.” Morgan on Instagram.

Thoughts? Tweet us at @mochimag. #RichKids of Beverly Hills airs Sunday nights on E! at 10/9c.