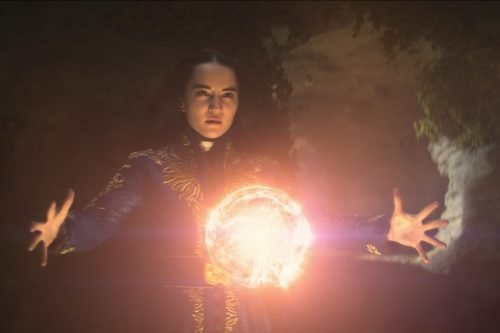 This article is part of Mochi’s Holiday 2022 issue, celebrating Asian representation in the immigrant family holiday experience, fantasy shows to binge-watch through the new year, and our traditional and unconventional gift guides. Check out the rest of our issue here! And if you like what you are reading, please support us by buying us a boba through Ko-fi.

For those seeking an escape from reality and hoping to support Asian actors, a new generation of fantasy TV shows may enable them to do just that. As a general rule, the fantasy genre encompasses other worlds, usually ones in which magic is at play. For decades, fantasy TV  which traditionally involved medieval European-inspired settings — excluded Asian characters. Amidst the push for greater representation on screen, new shows have begun to cast Asians and other BIPOC actors as humans and not mythical species. (Unfortunately, this low bar is too often unmet.) While their treatment of race is still far from perfect, for a group as underrepresented as Asian Americans, the expansion of this genre is exciting nonetheless. For a comprehensive list of fantasy shows with Asian cast members, we’ve compiled one for you at the end.

Non-traditional casting has faced significant backlash from far-right viewers who insist that the fantasy genre is for white characters alone. This has garnered widespread attention in the media with regard to the complaints about Black actors, such as Sophia Nomvete and Ismael Cruz Córdova in “The Rings of Power,” Leah Jeffries in “Percy Jackson and the Olympians,” and Halle Bailey in “The Little Mermaid.” However, this racially motivated gatekeeping of the genre harms Asians as well.

People of color have long spoken out against non-traditional casting as a means of claiming “representation” without actually amplifying the voices of marginalized people. All of the fantasy shows listed below — from “Shadow and Bone” to “Percy Jackson” — were adapted from books by white authors, and all draw inspiration from European cultures. While they now star Asian actors, none of them involve Asian myths or folktales, which sends the message that our cultures lack appeal for mainstream audiences and our stories are not worth telling.

Finally, mixed-race (white and Asian) actors, such as Jessie Mei Li in “Shadow and Bone” and Anya Chalotra in “The Witcher,” are overrepresented in the fantasy genre. While biracial Asians are Asians and their achievements should still be celebrated, some viewers remain concerned that colorism is at play.  Perhaps this persistent emphasis on white features is another attempt to cater to white audiences; further suggesting that these shows, while starring actors like us, are not really for us. Fortunately, in what will hopefully become a lasting trend, critically-acclaimed actors like Michelle Yeoh and newcomers like Amita Suman have begun to tip the balance.

A Closer Look at “Shadow and Bone”

Unlike the other shows listed below, “Shadow and Bone” stands out as having a relatively diverse cast and an explicitly Asian lead. Li plays Alina Starkov, a seemingly ordinary teenage girl who soon discovers that she is a Sun Summoner, a legendary Grisha with the power to command light. She seeks to destroy the Shadow Fold, a swath of monster-infested darkness that divides her home country of Ravka.

When comparing the show to its source material, one of the biggest changes is Alina’s race. In the book series by Leigh Bardugo, Alina’s ethnicity is never specified, but she is heavily implied to be white, described as pale with mousy brown hair. Bardugo briefly mentions that she was born near the Ravkan border located north of Shu Han (inspired by China and Mongolia, whose residents have East Asian features), but without further elaboration. It’s worth noting that the original cover art depicted Alina as white and blonde. By contrast, Shu characters, such as the Bataar twins and Botkin, are clearly described as such, and occasionally — in the case of Botkin, the Second Army combat trainer not unlike a gruff, accented martial arts master — revive well-worn tropes.

To be clear, these aspects did not deter me from watching the show. As a mixed-race Asian girl and die-hard Grishaverse fan since the eighth grade, I rejoiced when I discovered that Netflix would cast a half-Asian actor as Alina. However, I was also worried about how they would address this major change. Ultimately, their decisions drew mixed reviews. (Warning: spoilers ahead.)

“Shadow and Bone” did not ignore Alina’s ethnicity. Led by biracial producer Christina Strain, they created a new storyline surrounding her Asian heritage. The first episode begins with a voiceover by Li, who explains that Alina has “never been welcomed” in Ravka because she inherited her mother’s features. Her mother hailed from Shu Han, which Ravka is currently at war with. Alina faces racism as a child in the orphanage, then in the army where caricatured anti-Shu propaganda hangs in tents and a fellow soldier sends her to the back of the soup line. Even after her awakening as the Sun Summoner, she endures microaggressions at the Little Palace, where servants mock her eyes and the queen of Ravka requests a Shu interpreter.

Some fans expressed disappointment with this new trajectory. Twitter users took issue with the use of outdated slurs like “rice eater” and “mutt.” Others criticized the vilification of other characters in creating an atmosphere of racism. In Episode 3, Zoya Nazyalensky (Sujaya Dasgupta), a fellow Grisha, calls Alina a “half-breed,” an epithet notably absent from the book. (As with Alina, Bardugo implied that Zoya was white for most of the series. Zoya’s identity as a biracial, half-Suli/South Asian woman is not revealed until several books later and is only hinted at in the show.) Alina’s race also complicates her relationship with General Kirigan (Ben Barnes), the leader of the Grisha with whom Alina falls in love and eventually exploits her powers to increase his own. A white man manipulating an Asian woman is a familiar and troubling dynamic, yet the writers skirt around this topic. Finally, because only Shu characters face overt racism in Ravka, some questioned whether these additions were necessary at all.  Jesper Fahey and Nadia Zhabin, played by Black actors Kit Young and Gabrielle Brooks respectively, never had their ethnicity commented upon.

Still, while “Shadow and Bone” faced difficulties in its treatment of anti-Asian racism, at least the writers attempted to address the issues Asian Americans face today. Perhaps this is why the series resonated more powerfully compared to others that are merely fulfilling their “diversity quota.” Plus, I can’t deny the thrill I felt watching powerful Asian characters summoning light, commanding wind, and wielding knives on my TV screen. This was something I’d never experienced before: characters who resembled me, in a world unlike my own, celebrated as heroes, not villains or “the other.” For this, I will always be grateful.

Here are some fantasy TV shows starring Asian actors to binge-watch this holiday season (or eagerly anticipate in the new year):