Home EntertainmentAnd the Academy Award Goes To… You Again? 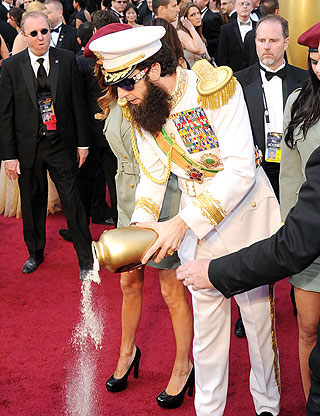 I watched the Oscars last night, and I hate to say it but I was thoroughly unimpressed. According to a study by the LA Times, the average age of the Academy voter is 62—and it showed. What would an Oscar awards show be like if, say, Tina and Amy co-hosted (instead of “Billy Crystals,” as Sacha Baron Cohen’s the Dictator calls him)? Or, perhaps even more bizarrely, Harold and Kumar? That would be crazy.

did on Indian actor, Irrfan Khan.

you ask. He’s the interrogator in “Slumdog Millionaire.” The father in “The Namesake.” If that helps you. In the article, Khan says, “It will take time before Hollywood is free to write a story about an Indian guy, unless it’s about the dark side of India, like ‘Slumdog.’ ” And he’s right. Because, as exemplified by last night’s show, Hollywood is anything but ready for the modern world. Who’s running that show, seriously? There’s so much talent—so many young videographers and actors out there of every color and size with every kind of story imaginable—and yet what we get is this self-congratulatory show with nostalgia-inducing montages about “what Hollywood loves about Hollywood.” We get a string of red dresses and please-stop-talking-now music that plays actors off stage. I love the Oscars, or at least, I

the Oscars. But what I love now is more like the potential of what the show could be, and it kills me when the event is anything but. We see the same movies, the same actors, the same stale hosts and jokes year after year. When the Academy finally picks a younger hosting duo, they choose the most mismatched pair ever. Anne Hathaway and James Franco? How was that going to go anything but Pineapple Express? You could’ve had Mindy Kaling or Emma Stone, one of our favorite presenters of the night! Zack Galifianakis or Stephen Colbert! Sigh. Doesn’t the Academy want a new generation of viewers?

Oh, speaking of Sacha. The highlight of my evening was when he

and told him he was now wearing “Kim Jong-il.” Ryan was not happy, and as obnoxiously sensationalist as the Dictator’s act was, he captured a little of the giddy energy and envelope-pushing humor that the Oscars need. Get on that, you guys. And for God’s sake, please give more Asians leading roles that aren’t just centered on

because being Asian is but a fraction of our identities. We could all use more Glenn from “The Walking Dead” and “Grey’s Anatomy” Cristina in our lives—but on the big screen.

0 Replies to “And the Academy Award Goes To… You Again?”