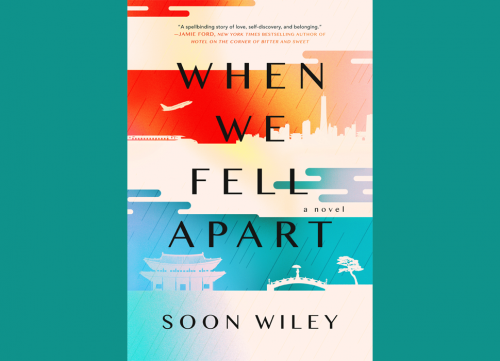 There are parts of ourselves that only we know — parts that we don’t know how to reveal, even to those we spend the most time with, even to those who love us most. And then there are parts of ourselves that we haven’t yet discovered. “When We Fell Apart,” Soon Wiley’s debut novel, explores how these parts come to be known, and how keeping them hidden can be the undoing of relationships and lives.

A story told between two perspectives, “When We Fell Apart” follows Min, a biracial Korean American working in Seoul, and Yu-jin, his high-achieving Korean girlfriend. When a detective comes to Min with questions about Yu-jin’s shocking death, Min embarks on a quest to find the truth behind what happened. He looks for answers in her relationships with her best friend So-ra, her mysterious roommate Misaki, and her domineering father, a high-ranking government official. Along the way, Min must confront his own grief, misperceptions, and role in Yu-jin’s life and death.

A high school English teacher in Connecticut, Wiley sold his first novel in a two-book deal to Dutton Books. Film rights have also been acquired, so we hope to see this vivid narrative unfold on a screen in the near future. In the meantime, Wiley spoke with us over the phone ahead of publication day about the outsider perspective of a writer, the liminal state of being biracial, why he chose Seoul as the setting for this book, and what his students think of his debut.

TW: This book pulses with a sense of loneliness — Min, Yu-jin, So-ra, Misaki, and even Yujin’s father each seem isolated in their own ways. There’s an archetype of the writer as an outsider, as someone who doesn’t feel a sense of belonging. I think this can be amplified when that writer is an ethnic minority in their community or marginalized by society. Can you speak to how a sense of not belonging has played a role in your point of view as a writer?
SW: I think most writers or most artists are probably outsiders in some respect. I’m a high school English teacher, so oftentimes we’re teaching authors like F. Scott Fitzgerald or Jane Austen. Nowadays we don’t view those people as outsiders because they are cisgender white authors, but of course, there are gradients to outsider-ness. I’ve always been interested in that.

As far as my own experience, people would have an immediate reaction to quite simply my name — like “Your name’s weird. What’s the deal with that?” There are immediate questions about my background: what I’m doing here, who I am, where I came from. And I think a lot of minorities have a similar experience.

In terms of education, I went to a Waldorf school [through 8th grade] and was very aware that it was not normal. I was friends with kids on my block, but all of them went to the public school. And my parents — my dad’s a painter, and my mom’s an art history professor — so I’m sure they got those same questions. If you say, “I’m a painter,” then people kind of look at you like, “How do you make money?” Also, when I went to a small liberal arts college in Connecticut, it was a bit of a culture shock when I realized that there were all these other kids who were much, much more advanced than me in terms of writing because they had gone to these really stellar prep schools. I had no reference point for that because I hadn’t gone to a private high school. So I was very aware that even in terms of my educational background, I was an outsider. It’s always informed the way I’ve seen things.

Specifically to the book, because I’m biracial, I’m in this liminal state. Socially, I can probably hang out with white people and at times, be perceived as almost white, but then other times I’m perceived more as Asian. When I was younger, I looked a lot more Korean, but as I’ve gotten older, I look less Korean. So that’s also very weird. When you’re biracial, while you can define yourself, a lot of times you’re defined by how people perceive you. It causes this kind of constant questioning of, “Well, if I’m this in this situation, and I’m that in another situation, and those two things are different, then what am I?”

TW: Has your relationship with your biracial identity changed over the years?
SW: One thing that has changed is that I think being Asian is cool now. Korean culture is cool. Japanese culture is cool. If you went back to 1985 and told them you’re going to be eating raw fish in 20 years, they wouldn’t believe you. But now you can go to Oklahoma and order a tuna roll. I don’t think we appreciate how drastic those changes are.

When I was younger, I think my parents wanted a very utopian idea of race: you’re of mixed ethnicity, but at the end of the day, you’re 100% your mom and you’re 100% your dad. But the question when it comes to being biracial is, “What are you? Are you 50% Korean and 35% Scottish?” Those are all conversations that I would have with people. But my parents were like, “You’re just a human being. Don’t worry about it.” That for me was a little bit confusing. Okay, I’m a human being, but then other people are clearly asking, “What kind of human being are you?” The irony is that now I’m much more comfortable saying, “Yes, I’m Korean American,” but I actually look less Korean than I did before.

My mom also doesn’t speak Korean. When her father came to the States, they only spoke English. They didn’t want anyone speaking Korean because they wanted to assimilate. So one of the ramifications of that is that I can’t speak Korean. I think that was one of the larger barriers to access, but then when I graduated from college, I decided to live in Korea for a year, and I taught English as a second language there. It wasn’t a conscious decision on my part. I wasn’t thinking, “I’m going to find myself and figure out my identity.” It was more like, let me go check this out and see what’s going on over there. Looking back now, I don’t think I was ready to recognize what I was really doing.

TW: How did you decide to choose Korea as the backdrop for this story?
SW: I went to Korea in 2009 and left in 2010. I actually didn’t start writing the book until 2014 though. When I was in Korea, I had no idea I was working on a novel. I was writing short stories without knowing that I was going to write a book and that I was going to set it there. But I was reading a lot of Murakami.  He was one of my favorite writers and I was thinking about what setting would provide the most opportunities in terms of plot. With a city, there’s a large palette to choose from. As a writer, you can pull from a lot of characters, there’s a lot of diversity. I had mostly been writing stories set in more suburban settings, so I wanted to set it in a large city, and Seoul made sense in my head.

I don’t really like writing fiction that takes place where I currently am living, so I usually write about places after I’ve left them. By the time I realized I was writing this novel that took place in Seoul, I hadn’t been there in five years. That was kind of difficult, but I just imagined what these characters were like and what they were seeing. And sometimes I would recall a specific place where they were, where I had been. I tried to limit my Google searches because in the early drafts, I didn’t care so much about accuracy. I wanted it to be vividly drawn.

When I sold the book, I made plans to go and visit Seoul with my wife. She’s Korean and she’s never been. I thought, “This is perfect. We’ll go see your family and I can fact-check the book,” but then COVID happened. So after that, I was on Google Maps doing Google Street View for three or four months just fact-checking stuff. I’m hoping to get back there though at some point.

TW: One last question: I would love to know if your students know about your book, and if they’re excited.
SW: They do. My former students definitely know, and I do teach creative writing to my current students. Those who are interested know, and some are more interested than others; some could care less. They’ve got sports games to go to or tutoring to go to, so they have their own things going on. It is very odd though, to know that students that I’m teaching have potentially read my book, but this is something that every writer who teaches creative writing has to contend with. I guess it’s a good problem to have.

Thank you to Wiley for sitting and speaking with me, and we at Mochi wish him many more successes and only good problems in the future. You can purchase “When We Fell Apart” here, and follow Wiley on Instagram here.