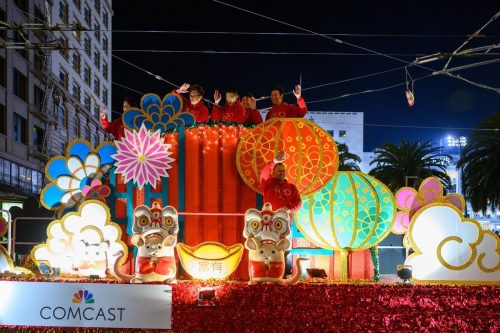 This is the second article in a series of articles sponsored by Comcast. All opinions are of the writer’s and not representative of Comcast or its subsidiary companies.

With a history stretching back to the 1860s, San Francisco’s Chinese New Year Festival and Parade is the oldest and largest celebration of the Lunar New Year outside of Asia. It began after the Gold Rush, when Chinese immigrants in California wanted to share their culture as a way of building connections amid misunderstanding and mistreatment. They chose the American format of a parade to do so, creating a truly Chinese American tradition.

An Essential Piece of Chinese American Culture in San Francisco
The parade is now part of the fabric of San Francisco, a city that knows how to celebrate. Residents from all different backgrounds were undeterred by fears of the coronavirus, which caused several Lunar New Year celebrations in other parts of the U.S. to be canceled. Though some restaurants in San Francisco’s Chinatown had reported a 30% to 50% decrease in business since news of the coronavirus broke, parade-goers showed up by the thousands on Feb. 8 to celebrate 2020, the Year of the Rat.

Bringing Together the Asian American Community
This year, Comcast/Xfinity invited Mochi magazine for a behind-the-scenes view of parade preparations. I met with Comcast’s Director of Government Affairs, Dillon Auyoung, on the corner of Market Street and Front Street, where floats and procession groups were beginning to gather. The block around us hummed with activity: marching bands warming up their instruments, dragon and lion dancers warming up their limbs, and children wearing mouse ears squirming as their parents tried to draw whiskers on their cheeks.

Auyoung himself was born and raised in the city of San Francisco and was excited to represent his company in the parade. “It shows how intertwined we are with the Asian American communities in San Francisco and beyond. I know my daughter Nadia’s Popo will be watching [the parade] on TV, and my family in the Sunset and Richmond neighborhoods will be tuning in, too. It’s a really empowering and inspirational event.”

Long-standing Traditions with Contemporary Energy
Organizers estimate 3 million viewers watch the festivities either on television or in person. Myron Lee of San Francisco has been attending the parade since his parents started bringing him as a child. This year, he came with friends and sat in the bleachers. Well connected in the San Francisco Asian American community, Lee said one of his favorite parts of the parade every year is seeing and cheering for people he knows. His favorite moment of this year’s parade? “When the San Francisco Lesbian/Gay Freedom Band marched by, playing the kind of Chinese song my mom would sing in karaoke. It felt so San Francisco!”

Lee has also marched in the parade with various nonprofits and appreciates what the event gives to the Asian American community. “Growing up, I didn’t really see people who looked like me on a pedestal in other places. The parade is something that totally represents me, though: American-born Chinese, Cantonese, and it’s freaking awesome. I love sharing our culture and experiences with people of other cultures as well.”

The Power of Representation
“You don’t have to be Chinese or Asian American to participate in the Lunar New Year celebration,” said Christine Nguyen, who rode on Comcast’s float for the second year in a row. She volunteers for the company’s employee resource groups (ERGs), including the Asian Pacific American ERG. “The APA ERG really allows people to submerge into cultures that they wouldn’t otherwise, whether they’re part of that culture or not. It’s a great way to dive in and get to know different traditions and habits.” The APA ERG organized Comcast’s float, with a theme of “Connecting people to the moments that matter.”

For first-time attendee Susan H., one of the most meaningful moments was seeing the city’s government agencies marching. “On a daily basis, you don’t necessarily see Asian Americans represented in the roles of police or [firefighters] since they’re a smaller percentage. I felt like I didn’t realize how much I wanted to see an Asian American in a police uniform until I saw it. There was a sense of pride in our community I didn’t expect, and it was really nice.”

H. brought her husband and 1-year-old daughter. “She’s never been to a party before and I thought that the music, the colors, the people, the excitement and the celebratory nature of the parade would be something that she’d really benefit from. And I wanted to expose her to Chinese culture at an early age.” The happy 1-year-old sat on her parent’s shoulders, kicking her legs, waving her arms, and eating cereal in between sections of the parade.

Marching Forward Without Fear
For the finale, the Golden Dragon — all 268 feet of it — snaked along Kearny Street, surrounded by bright flashes and loud pops of firecrackers. In traditional Chinese culture, the sounds and lights were believed to scare off evil spirits. This year, they seemed to have warded off any fears of the coronavirus and the subsequent xenophobia. Spectators of all backgrounds gathered and cheered for the final fireworks, continuing the generations-old tradition of building connections through San Francisco’s Chinese New Year Parade.