In Conversation with Acclaimed Poet and Author of “Oculus,” Sally Wen Mao 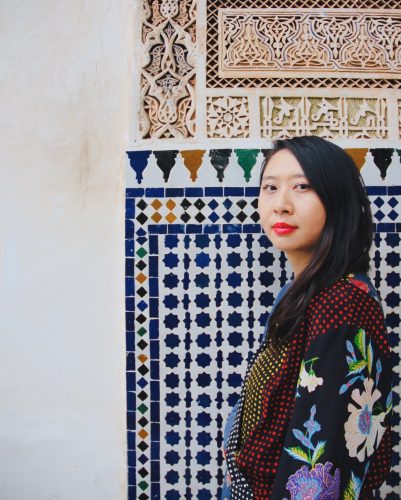 When I first met Sally Wen Mao we were in college, attending a staff meeting of our campus’ Asian American magazine. She walked into the room — tall, hair long, limbs stretching for days, a fierce intensity in her gaze. She looked like she could see things the rest of us were missing. Intimidated, I averted my eyes at first, imagining she could see right through me.

From the moment we spoke, my fears disappeared. She was open and lively, and I’ve since had the pleasure of slurping spicy noodles with her and her family, devouring breakfast in a San Francisco diner booth, and dancing to Rihanna at a mermaid-themed bar to celebrate her birthday.

These days, Sally has much more to celebrate.

For Sally, 2019 began with the launch of “Oculus,” her second book of poetry, which The New Yorker hailed as “visionary poems for a blinkered world.” The year ended with “Oculus” on five prestigious best-of-2019 reading lists: NPR, Time Magazine, Book Marks, Entropy and Library Journal, which referred to it as a “spine-tingling sophomore collection.” Between these bookends of buzz, Sally appeared on PAPER Magazine’s list of 100 People Taking Over, on the pages of Harper’s Bazaar, on multiple stops of her book tour, and at writing residencies around the world.

When I congratulate Sally on the success of “Oculus,” she directs the spotlight toward the people around her. “There are really incredible books that came out this year, and to be included among them is just excellent. I know that it’s a product of my hard work, but it’s also the hard work of my editor at Graywolf, and the whole team behind it that I’ve been grateful for since day one.”

Sally’s voice is a vessel that is filled with mirth, contemplation or outrage depending on the subject matter. It easily swells in volume, overflows into laughter, and, like her writing, it delivers truth without fear.

She suggests something closer to a conversation between friends rather than a traditional interview, which she’s done plenty of this past year. This preference reflects how her work is not self-focused, but in direct dialogue with society. Her poetry creates space for the stories and voices of others.

Below, Sally speaks on her alter ego, Anime Wong, James Baldwin and what belonging means to her.

TC: A recent theme Mochi has been exploring is that of “belonging.” What does that word mean to you?
SWM: Belonging is a feeling of communal ties, right? The feeling that you’re invited, that you are a part of something. It’s essentially the opposite of alienation, which has been a more usual feeling for me. Whatever the opposite of belonging is, that’s more “default.”

TC: For me, too. I was one of very few people of color in my environments before college, and though I wasn’t always aware of that fact, I felt like I didn’t quite fit.
SWM: I actually went to a predominantly Asian American high school, and even there, I really didn’t feel like I belonged. There can be even more pressure if you’re within a community that you supposedly are already a part of.

TC: That’s true. If you have the physical appearance of being in the given community, but don’t think the same way or want the same things, then it can feel even more lonely. Where do you think you found your greatest sense of belonging?
SWM: I feel like I’m still trying to figure that out. I’ve found some of it in creative communities of color. For the most part though, I feel that I’m still searching, that it might be a lifelong search. I do have wonderful communities that I’m part of, and I’m grateful for them — great communities of Asian American writers and writers of color, but within them, there’s still division. I think that living under a capitalist society, people are forced to think in terms of competition, and that can disrupt the notion of community, communion and belonging. Belonging is a fragile thing. It can change depending on how you feel and where you are in life. So yes, I’m still trying to aspire toward that, and figure out how to belong and feel belonging. I really hoped I would have found it by my thirties!

TC: We’re still young! It does sometimes feel like people our age in other fields have found their place and are in their groove, while others are grappling up a wall. It’s comforting, though, to realize that maybe we’re all searching for that sense of belonging no matter what our age. I wonder if anyone has it figured out.
SWM: I honestly don’t think that anyone can have everything figured out.

TC: Then life would just be over.
SWM: Exactly. It would come to a standstill.

TC: Do you feel like being a poet gives you a stronger sense of belonging because you know who you are to the world, or is it the opposite, because professional poets are so rare, and not often understood?
SWM: Both of those answers are right. I do feel more connected to a sense of purpose. I feel that my poetry has given me an outlet to engage with the world in complicated ways, seek out wonder, and hold me accountable. I do not live a meaningless existence. At the same time, it does feel alienating. One thing that I always find myself having to do is explain myself: explain my life, explain what the life of a poet looks like, explain how I make ends meet, explain why I pursue what I do, explain what my poetry is about. All of these things require so much explanation and I definitely get tired of it at times.

TC: Yes. Sometimes when people ask questions, it’s out of friendly curiosity, but it can feel isolating. Especially when you’re the only person in the room to answer those questions. Both your poetry and your personality are bold and outspoken. Did you find your way to poetry because of a desire to speak out and work toward change, or did the poetry inspire that in you?
SWM: Poetry has always been a personal mode of expression. I realized later on how powerful poetry is as a political tool as well. And how some of the most incredible poets I looked up to were extremely political, and wrote a lot of poetry that responded to the injustice of the day. For example, June Jordan was one of the earliest poets that I loved in high school. There have been so many poets who were part of important movements, and later on I think I internalized that sense of duty. What the poets do is they create the language to imagine what justice can look like. And that’s something that I don’t think a lot of people can do.

There’s a James Baldwin quote from his speech “The Artist’s Struggle for Integrity”— let me read it to you: The poets (by which I mean all artists) are finally the only people who know the truth about us. Soldiers don’t. Statesmen don’t. Priests don’t. Union leaders don’t. Only poets.

There’s another passage that’s really meaningful to me and touches on belonging: I won’t say ‘me,’ but it’s my story. The first thing an artist finds out when he is very, very young (when I say ‘young’ I mean before he is fifteen, that is to say, before, properly speaking, he or she can walk or talk, before he or she has had enough experience to begin to assess his or her experience) — and what occurs at that point in this hypothetical artist’s life is a kind of silence — the first thing he finds out is that for reasons he cannot explain to himself or to others, he does not belong anywhere. [Read full passage here.]

This is something I’ve always comforted myself with, because even though I haven’t felt that full sense of belonging, I can generate it by being a poet, by writing, by trying to speak the truth.

TC: In that way, not belonging is a way of being connected to others who don’t belong — the other poets, the other misfits. Thank you for surfacing that. I feel like Baldwin has said everything we need to say. Before the lightning round, I want to ask: In “Oculus,” you have two sections of poems about the actress Anna May Wong. Who, though, is Anime Wong? How was she born, and when does she come out?
SWM: Earlier this year I was on a book tour, and during Asian American Heritage Month, I put together an event for APICC [API Cultural Center] in San Francisco. They gave me a grant, and I rented out the International Hotel, which is a historic hotel, a home for immigrants, in what used to be Manilatown.

I also put together a video of Asian American women poets answering questions about who their alter egos would be, and what human limitation they want to transcend. It was something I was thinking about a lot because I have so many human limitations, so many fears, and so many beliefs that hold me back. And taking on an alter ego can push past those factors. What would it look like if we were free? One limitation that is very powerful is shame. Especially in the context of being an Asian American woman, shame is very charged and strong. So I was trying to explore that: what does it mean to be ashamed, or to be shamed for having feelings, or to be shamed into feeling that you’re not worthy. Anime Wong was my way to combat the power of so many of these negative experiences and feelings.

I focused events where I appeared as Anime Wong on heartbreak. I even incorporated a PowerPoint presentation of some terrible men who took advantage of Anna May Wong in her lifetime. I then played clips of heartbreak from her movies, wanting to explore this very particular Asian American, female mentality. A lot of the women that I explore in my book help me transcend my own life limitations, and face those anxieties — the feeling of not belonging, the feeling of alienation.

TC: Finally, lightning round of questions we ask Mochi staff members when they join: What job would you be terrible at?
SWM: I would probably be terrible at being a math teacher because I can’t do math.

TC: What was the best compliment you’ve received?
SWM: Maybe those year-end lists. I’ve also gotten some really wonderful feedback from women of color, and I find that it’s always the most rewarding when people tell you how much your book has impacted them.

TC: What book, game or movie universe would you most like to live in?
SWM: I would like to be in one of those K-dramas where the girl has to choose between five cute guys! I’d be crying in front of a McDonald’s or on the steps of a museum with a melting ice cream, and then one of them will suddenly pull up on a motorbike.

Aside from the perfect K-drama moment, I look forward to seeing Sally’s star continue its rise in 2020. One of my first impressions of her still rings true: She sees things others cannot. Through her poetry, we are given the gift of her vision, and anyone who has experienced it would assure Sally that she does indeed have a place of belonging: on best-of lists, on our bookshelves, among other vital voices of today.