The Historical Significance of the Miss Chinatown U.S.A. Pageant 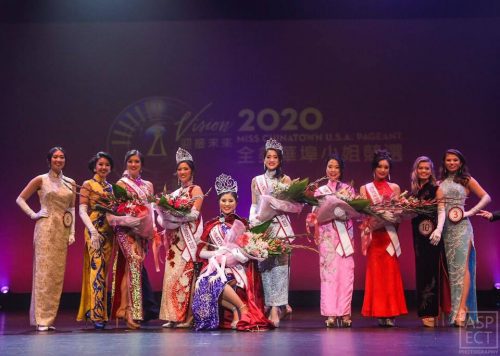 This is the first article in a series of articles sponsored by Comcast. All opinions are of the writer’s and not representative of Comcast or its subsidiary companies.

Auntie Mochi has a confession to make: Despite being born and raised in the San Francisco Bay Area and being Chinese American, I never understood the importance of the Miss Chinatown U.S.A. pageant until recently. As a teenager, I dismissed the whole thing, scoffing that these girls only participated in Miss Chinatown U.S.A. because they couldn’t make it in the national pageants. What I didn’t comprehend at the time was that racism was the reason qualified Chinese American women couldn’t win — or even enter — these white pageants.

Created in 1948 as a viable alternative for Chinese American women to participate and shine in pageants, Miss Chinatown U.S.A. was eventually included as part of the San Francisco Chinese Chamber of Commerce’s Lunar New Year celebrations in 1953. The 2020 Miss Chinatown U.S.A. Pageant was held at the Palace of Fine Arts in San Francisco on Saturday, Feb. 1, and I had the distinct pleasure of attending my first pageant of any sort thanks to the exclusive invitation of Comcast. (I have worked with Comcast for the past few years as a writer and social media influencer at various events.)

Doors opened at 6:30 p.m. and guests mingled, taking fun photos with their friends at the Comcast photo booth and entering raffles to win roundtrip tickets from Southwest Airlines. Seeing so many Chinese Americans of all generations — many of whom flew from all over the U.S. to support the contestants — made my heart glad. How wonderful it was for our community to gather together and celebrate these amazing women.

Miss Chinatown U.S.A. Winners are Ambassadors for the Chinese Community
Michelle Alba-Chua, Director of Business Operations in Comcast’s California region, described the pageant as a perfect example of where Comcast chooses to spend their time and resources. “We look at the diversity of how we are involved throughout the year. It’s mindful; it’s purposeful.”

Pageant coordinator Noreen Chan Wong explained to me the importance Miss Chinatown U.S.A. and her court played in the Chinese American community. “They’re very well-qualified and positive role models for Chinese American women and for the San Francisco Chinese Chamber of Commerce to have them participate in our pageant.”

Nine titles and awards — including the 2nd Annual Miss Community Impact Award presented by Comcast — were up for grabs, and excited murmurs rippled through the audience in anticipation. After all, as Wong said, “Miss Chinatown U.S.A. will be our ambassadors for the Chinese community. We’re proud to have that happen for the Chinese Chamber of Commerce.”

What was the Miss Chinatown U.S.A. Pageant Like?
The celebration of Chinese culture, history and traditions started off with a presentation of the 10 contestants. With the theme of “Vision” for 2020 (Get it? It took me almost all night.), each woman designed and wore a gown to symbolize their platforms. The women passionately spoke about issues ranging from increasing women in STEM jobs, to seamless integration of technology for universal access to health services, to advocating global gender equality for women.

The moment that showcased the high production value of the pageant for me was during the talent portion of the competition. Contestant Jade Lun brought out a mini ice-skating rink in order to demonstrate her abilities on ice. I couldn’t believe it was possible! Other ladies performed traditional Chinese ribbon dancing, sang, drummed and even featured step-dancing and jump-rope tricks.

After the talent portion came the form and fitness competition, where contestants wore bikinis and showed off their physiques for the judges. While I understood the tradition, this was my least favorite part. However, I applaud these women for owning the beauty and function of their bodies. I know for sure that even in my prime, this Auntie Mochi could not have competed!

The last and most interesting part of the pageant was the question-and-answer segment where each participant chose a question at random to address. As pageant judge Alba-Chua accurately attested, “There were some hard questions there, [but] they were all so poised and so intelligent. Their character came out with the answers they provided us.” She further expressed, “They were all such great women and it gives me such great hope that these are future leaders.”

While the judges deliberated, audience members were treated with performances by Qiqi Zheng, the first female winner-champion of the “Voice of Cantonese” in 2018, and local singer-songwriter James Lanman.

In high school, Yang founded a chapter of Girl Up, a United Nations Foundation campaign that empowers women and girls to defend gender equality. “It was through Girl Up that I really found my voice and this relentless energy to serve and fight for women and girls,” she said. Yang helped Girl Up pass national education legislation for refugee girls’ access to education, meeting with legislators on Capitol Hill and in her community to try and get that law passed. It was passed in 2018.

As if that weren’t enough, Yang also helped raise money to provide thousands of feminine products to girls in Mexico so that they wouldn’t have to skip school because of their periods. She even hosted benefit concerts to raise money for the Girl Up SchoolCycle campaign, which provides bicycles to girls in Malawi so they can get to school safely. Because many of the roads are unpaved, it can be dangerous for girls to walk to and from school. The bicycles help them get to school faster and quicker to keep them safer.

“Community service showed me how important it is to not just have a crown on your head, but also have a crown over your heart,” Yang said. “That’s what shows true character more than anything.”

Who Won the 2020 Miss Chinatown U.S.A.?
Not only did she receive the Comcast Miss Community Impact Award and the title for Miss Talent, Lauren Yang also won the title of Miss Chinatown U.S.A. 2020. “It hasn’t sunk in yet,” Yang told me in an interview the next morning. “It may in a few hours, but it just doesn’t feel real.”

As a child, Yang started in pageants because her mother wanted her and her sister (Karen Yang, Miss Chinatown U.S.A. 2017) to have that unique experience. Because Yang was super shy, she used pageants to improve her public speaking skills and try something out of her comfort zone. “The Miss Chinatown pageant system is completely different from anything that I’ve ever done before,” she said. “It’s focused on cultural traditions and history. It’s just incredible to feel so close to my Chinese heritage here.”

As the new Miss Chinatown U.S.A., Yang hopes to get out into the Chinese community more. “We have a pretty established Chinatown [in Boston],” she said. “At school, we have programs that allow us to go to Chinatown and teach ESL students or teach Chinese senior citizens about American history to help them become citizens and pass that test.”