The Power Of Unrelenting Hope In “House Of Sticks” 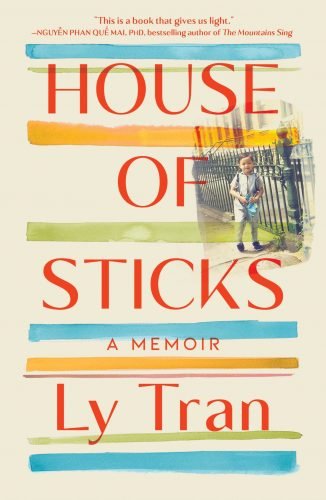 When Ly Tran arrived in her railroad apartment in Queens, New York, in 1993, her new home reflected the empty promises of the American dream. The lack of heat and furniture, along with the looming threat of scarce job opportunities, mocked the ideal of a promising new beginning for the Tran family. But to Tran, who was only a child when her parents emigrated from Vietnam to New York, these red flags don’t register. Tran doesn’t see the apartment as missing all the essentials to life; she sees an apartment with room for potential, growth and hope. Filled with innocent optimism, Tran is too young to foresee how her family’s life in America will be haunted by her father’s past as a former lieutenant in the South Vietnamese Army, how despite being beleaguered by poverty, they are ultimately motivated by a relentless perseverance to make it.

While Ly Tran’s debut memoir “House of Sticks” is an affecting tale of the immigrant experience, it is also a beautiful coming-of-age story that traverses from Tran’s early childhood all the way up to her college years. In the beginning, little Tran is full of reckless faith in her parents and their new life, but as the memoir progresses and the realities of her family’s trauma and her father’s war-torn past sink in, her hope begins to crumble. Tran’s memoir chronologically plots her story of becoming — a course that constantly tests, threatens and inspires the optimism Tran once held so steadfastly.

For Tran to renew her belief that there’s a better life waiting for her, she must first lose it. One of the bitter realities that chips away at her faith, as many Asian kids growing up in America experience, is the realization of being an “other.” When Tran is in middle school, she and her family begin working in a nail salon in Brownsville, Brooklyn, where she watches customers degrade her mother over her poor English, while condescendingly praising Tran, “Wow, your English is not bad” — and, time after time, running out of the salon without paying.

In those formative years spent helping her mother at the nail salon, Tran is hit with a bucket of cold water, realizing at an early age how the U.S. sees Asian Americans — as workers, servants, outsiders — and the role she is expected to play. She smiles at the clients who mock her mother, knowing that’s what her mother expects of her and that’s how to keep the customers (and their money) coming back. “House Of Sticks” captures that feeling of limbo that many people of color know all too well, a feeling of being caught in a precarious position between one’s own self-worth and society’s remonstration of it.

Tran’s bubble of youthful optimism pops for good when she realizes she’s not only an “other” by being Asian American, but she’s also alienated as an Asian American woman. In the chapter titled “Betrayed by Our Tongues,” Tran captures the inexplicable feelings of shame, confusion and powerlessness that come with being sexually assaulted as a young girl. During the summer before her 8th grade, Tran is stopped by a man on the subway who exposes himself to her and holds her against him. Even after escaping to find a subway worker and her mom at the end of the day, Tran is choked by voicelessness. A few chapters later in “Hey, Beautiful,” a similar encounter happens when a male client at the salon touches Tran’s thighs, and again she is unable to cry out for help. She tries to bargain with herself, doubting the wrongness of the situation. “Maybe there was nothing wrong. Maybe he was just being friendly,” Tran attempts to reason. Within her silence and self-negotiation lie the echoes of all other immigrant women, other Asian American women who have kept sexual assault to themselves, have been told not to make waves, and have been taught that such attention is theirs to blame. Tran’s silence is voiced by many.

Even when Tran learns about feminism in school, she struggles to communicate these ideals to her parents, who hold traditional views of Vietnamese patriarchy, awakening Tran to another bitter realization: her family is not like others. Not only is her household molded out of an age-old Vietnamese belief that a woman’s worth is determined by her status in marriage — forcing Tran to watch her mother be ridiculed for not being a good enough housewife and being told herself that she won’t amount to much as she’s just a silly woman — but this toxic masculinity is also entangled with her father’s trauma from the Vietnam War.

On April 30, 1975, Tran’s father, Tran Bình, along with millions of other South Vietnamese soldiers, was imprisoned and sentenced to a reeducation camp after the North Vietnamese army captured Saigon. There, Bình endured a decade of dangerous labor and starvation. This imprisonment had lasting consequences, leaving him paranoid of the government, fearful that his freedom could be revoked at any moment, and scared that he wouldn’t be able to lead his family into a better life. Before Tran could recognize this trauma for what it is and reconcile her father’s abuse with her love for him, she only knew his anger. He would beat her and her brothers when they didn’t understand their math homework, hit her for talking back, and to her greatest frustration, refused to let her get glasses, thinking they’re a tool used by the government to worsen people’s eyesight. This meant that for much of Tran’s life, she couldn’t see. From elementary school through to college, she begged her father for glasses, as her vision deteriorated more and more and her grades fell behind. Each time, her father would get angry, hitting her for asking.

Ultimately, no matter how hard she tries to force herself to see, Tran’s eyesight continues to worsen, and with it, so does her mental wellbeing. The more she struggles to see, the more she feels that something is fundamentally lacking within her, and the greater the rift between her and her father grows. By the time Tran enrolls in the Macaulay Honors College at Hunter College, these years of abuse, family trouble, and self-confidence have caught up with her. In the final phase of Tran’s continual loss of optimism, she misses classes, stops talking to friends, and stays in bed all day, reminding herself “that escape was futile, that no matter how hard [she] tried, [she] would never possess the strength to overcome the circumstances of” her life.

Tran expertly juggles all these obstacles she’s faced since coming to America in her memoir, paying homage to the nuances of each one. Given all the ways that life has proven Tran’s childhood optimism wrong, her memoir would seem like a sad or harrowing read — but it’s not. Certainly, Tran’s realization of being an “other” and her experiences with sexual harassment are frustratingly common for many of us, and her father’s abuse is hearbreaking. Yet despite it all, her family perseveres. After her depression leaves her in an involuntary psychiatric hold and leads to her eventual dismissal from the Honors College, Tran rediscovers the hope she had as a child. She enrolls in a new college and this time around, is determined to overcome her struggles. She refuses to “let this situation hold [her] back” the same way “poverty, ignorance, and fear” had. She tells herself “to stay strong” and “to have faith that it [will] work out in the end.”

Reading these lines about Tran’s hope for her future during this time of heightened AAPI hate made the memoir that much more inspiring. To hear how Tran and her family made it through so many turbulent times, unstable environments, and obstacles by relying on their will to thrive sparked hope that even in circumstances of extreme xenophobia, racism and hatred, keeping faith that a better future is out there is enough to make it so. Ly Tran’s memoir comes at the perfect time to remind the Asian community that we, like Tran, “have gotten this far.” To “fail is not an option.”

“House of Sticks: A Memoir” was released on June 1, 2021. You can purchase Tran’s book here and keep up with what she’s reading and writing next by following her on Twitter at @lytranwrites.