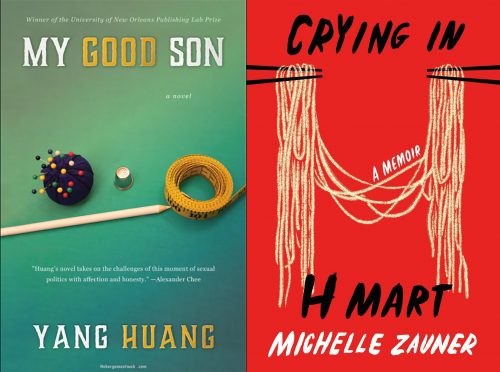 Parents are the first ones to love us and hurt us. As children, we haven’t developed the emotional maturity yet to appreciate our parents’ good intentions. And even when we do, we can still feel hurt by and resentful of our parents’ efforts — more so when there’s a cultural barrier. The stereotypes of Asian immigrant parents pushing their children are plentiful and have become a trope. However, parents are not supporting characters in an Asian American child’s life; they are main characters deserving of nuance and even parent-centric stories.

This is the case for two recently published books: Both feature a parent trying to make sense of America, a country foreign to them, and trying to give their child the best shot at succeeding in it. In “My Good Son” (University of New Orleans Press, 2021), Yang Huang tells the fictional story of Mr. Cai, a tailor in China who teams up with an American customer to get Mr. Cai’s son, Feng, to go to college in the States. Meanwhile, Michelle Zauner’s tears in her memoir “Crying in H Mart” (Knopf, 2021) are due to losing her mother to cancer, just as they were beginning to heal their tumultuous relationship. In both books, the fierce protection and dreams the parents have for their children are met by their children’s strong will. Levels of privilege in America and their countries of origin only complicate the parent-child relationship further.

Michelle Zauner grew up in the United States as the only child of a Korean immigrant mother and white father. After her mother, Chongmi, passed away, Zauner began searching for her own Korean identity and re-examining her mother’s expressions of love. Her memoir mourns her mother and describes the intense conflicts between their personalities and cultural gaps. In one anecdote, Zauner recalls getting hurt climbing a tree as a young child, and rather than attending to her, Chongmi gets angry at her for injuring herself and scarring her body. This form of hyper-protective parenting stems from love, but it’s also a sentiment that can breed resentment in children.

Zauner says her mother always seemed to be able to see ten steps ahead. This means she protects her daughter from potential harm, but Zauner also sees her mother making decisions that she doesn’t understand. When they traveled to Korea together when she was a child, a scout approached her mother, asking if her daughter would be interested in becoming a K-pop star. She laughed it off, citing that her daughter didn’t speak Korean, then told Zauner that she’d have no autonomy in the Korean entertainment industry. What might not seem like affection — yelling at your injured child, turning down an opportunity that’s flattering — turn out to be some of the most loving gestures in retrospect.

Likewise, in “My Good Son,” Feng’s parents do everything they can to secure a future for him. The irony is that Feng is unmotivated and makes poor decisions, yet he still has a chance because his parents “pick up the pieces” for him. Huang chooses to make Feng the center of both the novel and his parents’ lives, to the point of never naming his parents, only referring to them as Mr. and Mrs. Cai. However, this is a parent-centric story in that we learn so much more about the parents’ past and the efforts they go to for Feng.

“Feng is a creative person and craves freedom, which is not a top priority for most people in China,” says Huang. Mr. Cai often compares his youth to his son’s, wondering if he can prevent Feng from making similar mistakes, like becoming a tailor so he can make a dress for his first love, foregoing all other opportunities.

Mr. Cai confesses his past to Feng, and it isn’t clear that he has any impact on his son, who makes his own consequential mistake by getting his ex-girlfriend pregnant then abandoning her. Mr. and Mrs. Cai try to negotiate with their son to make a responsible choice, thinking of his (and their grandchildren’s) future.

Because of the cultural divide, the parents often don’t know what to do and how to express themselves in a way that their children will listen and understand. Zauner’s white father is clueless when Zauner and her mother get in fights, not understanding their mother-daughter dynamic: care emphasized by warnings, and love underscored sometimes by yelling. Mr. and Mrs. Cai are at their wits’ end when it comes to how to motivate their son to study for university exams and what to do about their twin grandchildren, who their son refuses to raise.

There is so much friction compounded by the fact that the parents are preparing their children for adulthood in America, despite having limited knowledge. They make suggestions that sometimes offend or infantilize their children, especially when it comes to questions like which school they should go to and who might be their sexual partner. The barrier between their countries of origin and America magnify misunderstandings between parent and child, and in some cases the gulf becomes so wide it causes grief that never goes away.

Huang says “healing from the aftermath of our families of origin” is necessary to find one’s place in society. The process of healing and reading these two books made me wonder what it is that parents can provide for their children in a land where they themselves don’t feel confident. And as those children become adults in America, what do they begin to provide for their parents? It could be scheduling a vaccine appointment for parents who don’t speak English. It could be worrying about their safety and warning them not to go out because of violence against Asian elders. These, too, are gestures of care.

At the end of “My Good Son,” Jude, the American who sponsors Feng to go to college in the States, teases Mr. Cai by saying if Mr. Cai wants his grandson to not grow up to be a heartbreaker, “[he’ll] have to raise him differently.” Of course, no parent gets two chances to raise their child. The question of who a child might have grown up to be, had there been different parenting choices, can be haunting.

As an adult child reading these parent-centric stories, I have limited understanding about the choices these fictional parents (and my own) made. I feel grief for the parent-child relationship that could have been. But I can begin to heal, knowing that the attempt that my parents made at raising me may have been flawed — but it was still their very best.