Home Arts & Culture, BooksExcerpts from “Nonwhite and Woman: 131 Micro Essays on Being in the World” 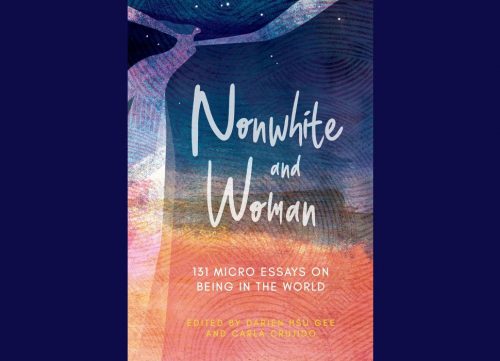 “Nonwhite and Woman: 131 Micro Essays on Being in the World,” includes an intro by the book’s executive editor, Darien Hsu Gee, who writes that, “Women of color grapple with a sense of identity and belonging, of trying to make sense of who we are and how our cultural and/or ethnic heritage impacts our navigation through life. … It is not unusual to find ourselves existing in multiple worlds or leading multiple lives. We are chameleons, more for survival than by choice. Often, we find ourselves feeling alone.”

Through this book of micro essays (defined here as 300 words or less), the writers break through the solitude using their words, connecting with readers through stories about family, food, racism, their bodies, and more. Each writer has their unique experiences, but the themes throughout will be familiar to many women of color.

Mochi Mag invites you to read the following selection of micro essays written by Asian American women that are featured in “Nonwhite and Woman.” We hope you feel seen and inspired to likewise share your own stories.

She came from an island, oceans away, the Philippines. She visited us once. Her simple silk dress clung to her tiny frame. Silver gray strands among her dark wavy hair. Her feet, once bound as a little girl, hidden beneath red silk slippers embroidered with lotus flowers. She smelled of Pond’s Skin Cream and herbs.

We had our own language, she and I—bobbing our heads, wild hand gestures like a game of charades. When we did come to an understanding, her face lit up like the flick of a match, her eyes a sea of gray-blue. Hao. Hao. Good. Good.

Mornings she stood by the stove, stirring thick rice porridge, adding slices of ginger root and scallions, filling our kitchen with sweet and sour smells. When I complained of a headache, she reached for the hexagonal jar of Tiger Balm, with its leaping tiger and gold-embossed cover. She’d dip her finger into the menthol-smelling ointment and rub it along my temples. I sat still, waiting for the throbbing in my head to end, waiting for the scintillating lights to dim. I’m not sure they ever did.

She returned to her homeland, but the memory of her never faded.

The day she passed, my mother received a call from overseas. Mother stayed upstairs in her bedroom all day. She was here and Amah was there, miles and miles away. I couldn’t comfort my mother—I was too young. But I knew she yearned for one last touch. One last good-bye.

Amah appears in my dreams. A vision. I see her face, her eyes, her hands—those unspoken words, the bridge between two lands.

Selina Li Bi’s writing has appeared in riksha: Asian American Creative Arts in Action, Cha: An Asian Literary Journal, Red Weather literary magazine, and Cricket. She also writes fiction and nonfiction for the educational market. Her chapbook, “Displaced,” an exploration of her experience as a second-generation Asian American, is scheduled for publication in the spring of 2022. She lives in North Dakota and holds an MFA in Creative Writing from Minnesota State University Moorhead.

When I Am Homesick by Kalehua Kim

My husband brings me mangoes. He lines them up on the counter, silently asking me to pick one. I choose the reddest one, with a blush of orange and yellow. Its smooth, tough skin comforts me, its heft feels right in my hand. I press it to my mouth and I can smell her. I smell my mother in the allure of her youth. I roll the mango over my face and we are cheek to cheek, my mother and me, heavy with the ripeness of memory. This is the first mother I knew, verdant and vibrant and firm. My palms tingle. I hold the mango in both hands, a heavy heart that I still carry because she asked me to. I press it to the center of my chest. This is how I hold you now.

Kalehua Kim is a poet living in the Seattle area. Born of Hawaiian, Chinese, Filipino, and Portuguese descent, her multicultural background informs much of her work. Her poems have appeared in Belletrist, Panoply, and ‘Ōiwi, A Native Hawaiian Journal.

Passing in the Middle Kingdom by Stephanie Han

I am unseen: black hair, brown eyes, a willful mute clocking centuries of emperor absurdities. Old men crush young, bludgeon sky that brings all to her breast. Factories slay lungs for trinkets. I claim neither kinship nor love. I descend from a provincial body that refused to kowtow. Battle imprints arrow through my blood. My mind shaped across the water by genocide and art. Cries that broke shackles. Hope finds harbor, but boats leave to sink. Far away, palm tree lyrics, ocean that turns knees to jelly. A Cosmopolitan is a sugary cocktail. Exile? A door slammed shut. Migrants flee to suffocate, refugees suckle the powder milk of dreams. Expatriates scribble bitterness for love and dollars. Tourist, a word for the lover of refrigerator magnets. Emigrant, immigrant, sojourner, traveler flip through a displaced thesaurus. Death, a final home.

Great Walls crumble. Cannibal rulers drive sleek cars, fatten prey in gulags, auction organs for copy handbags. Survival: a son, a cup of tea, a gold-plated toilet. I shut my ears to homeland tour poetry, read tomes on dumpling glories, fish dried in smog. The West spills seeds of belonging, but children cower in closets, weep behind smudged glasses, write of steamed rice comfort, the hurry-hurry of it all. Exodus. Swimmers ravaged by sharks, driftwood freedom. I bite my tongue; blood stains my shirt. In this village women long for sons, and rubber slippers cannot stop switches whipping the backs of calves. Bamboo scaffolds the blazing sun, boulders plead for space. This place gently buries us alive in memory’s hole. I say nothing. Passing in the Middle Kingdom.

Stephanie Han teaches writing workshops at drstephaniehan.com. Her poetry manuscript, “Passing in the Middle Kingdom,” is a Wilder Prize finalist. She authored “Swimming in Hong Kong,” recipient of the Paterson Fiction Prize, finalist for AWP’s Grace Paley Prize, the Spokane Prize, and the Asian Books Blog Award. A PEN and VONA fellow, she received grants from the LA Department of Cultural Affairs and was the inaugural English Lit PhD of City University of Hong Kong. She lives in Hawai‘i, home of her family since 1904.

My father’s fingertips were shaped like dull piano hammers. Interlocked in his, my fingers were tender root shoots covered in dirt and grease. With a near-identical squeeze of his hand, he could either send me a message of support or issue a soft warning.

Whether it was my father’s paw of a hand, a woman leading me down a grocery aisle, an unknown child pulling at my sweater, or a gentle shove when I was slow to board the bus, Asians and Asian Americans delight in the language of touch, and not because of any language barrier. A pinch or a kiss is more precise than a word, more urgent, more intimate, more honest.

I missed those touches during the pandemic—our shared currency of admonitions and affections. Instead, people pressed themselves against the walls when I entered the elevator, and worse, as I was walking my dog, a car swerved onto the sidewalk and two men leaned out to scream “TRUMP 2020!”

“ASSHOLES!” I screamed back.

I bought a taser soon after. My boyfriend Apollo bought a shotgun. We could feel the white rage that was overtaking the country.

We had been dehumanized for so long, the laugh line to Jay Leno’s jokes, that it was only a half-step to violence.

I told Apollo about the taboo that I felt when I saw an elder being hurt. “That old person is also somehow sacred to me.” He held my hand. We didn’t know what else to say. We knew how to relate as a woman and a man, but not as an Asian and a Black person, not yet.

Amanda Mei Kim is a Japanese and Korean American who grew up on a family farm in California. She writes about rural communities of color. She received her BA in American studies from Brown University and her MFA in Creative Writing from San Francisco State University. She received the Phelan Literary Award, was a finalist for the Heekin Award, and was nominated for a Pushcart Prize. Amanda completed residencies at Yefe Nof, Hedgebrook, and the Fine Arts Work Center. Her work has been published in Tayo, Brick, LitHub, and PANK.

I’m fifteen and my adolescent terrified-rabbit face is shifting into something that draws glances from older men. My mother sees them and tells me to be careful. What she means is, the world is cruel to women, watch your back, watch your back.

I’m twenty and in love with a woman. My mother is silent on the phone, then tells me it’s a phase, don’t I know what happens in the girls-only schools back home in Sri Lanka? She tells me to be careful. What she means is, this isn’t real love.

At twenty-seven I date an older white man, and my mother is happy. Better a man than a woman. Better cis than trans. Better straight than queer. Better older than younger. Better white than black. She tells me to be careful. What she means is, don’t get pregnant.

At thirty I’m married, and my ovaries grow cysts that burst in sharp pain. I take hormones to control them, and my partner and I decide never to have kids. My mother tells me to be careful. What she means is, too many hormones could damage her grandchildren.

At fifty-nine my mother falls down the stairs and dislocates her shoulder. She needs surgery, physical therapy, two years of healing. I tell her to be careful. What I mean is, I can’t understand the fragility of your body. What I mean is, will I become soft and breakable too? What I mean is, don’t leave me.

SJ Sindu is a Tamil diaspora author of two novels. Her first, “Marriage of a Thousand Lies,” won the Publishing Triangle Edmund White Award and was a Stonewall Honor Book and a finalist for a Lambda Literary Award. Sindu’s second novel, “Blue-Skinned Gods,” was published in November 2021. A 2013 Lambda Literary Fellow, Sindu holds a PhD in English and creative writing from Florida State University and teaches at the University of Toronto Scarborough.

“Nonwhite and Woman: 131 Micro Essays on Being in the World,” released Sept. 6, 2022, is available online and at your local bookstore.