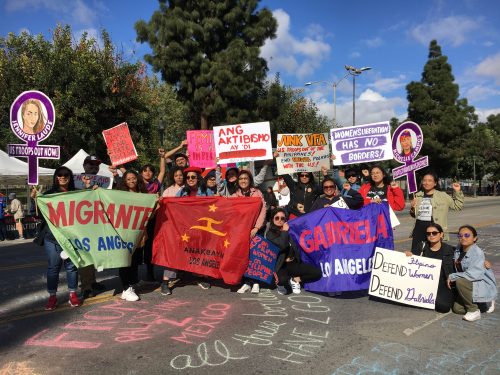 For the women of GABRIELA, resistance and community are one.

On March 7, 2020, the Los Angeles chapter of GABRIELA joined the International Women’s Day event held at the LA Memorial Coliseum. The event coincides with the International Women’s Strike, which advocates for living wages for mothers, an end to femicide (i.e. the murder of women), and feminism that centers women of the Global South. Given that these are all issues that affect women and children in the Philippines, the feminist Filipino group made their presence known with chants that resonated with other groups at the event.

I spoke with three members from the LA chapter that day: Ariana, Lauren and Terrie. They come to the group with different backgrounds, from having been in Filipino campus clubs to joining labor organizing movements. Whether their reasons for joining were social or political, what they have found in GABRIELA is a group that links them to their heritage.

However, the group doesn’t romanticize what it’s like to live in the Filipino diaspora. Learning about the Philippines requires coming to terms with patriarchy and imperialism, both forces that have pervaded the country for centuries. These forces have had the biggest impact on Filipino women, making GABRIELA not only an inspiring group, but a necessity.

A global organization, GABRIELA was founded in March 1984, around the same time organizers like Terrie were born. “I’m 41 years old. I helped the women’s organization, Sisters of Gabriela, Awaken! [SiGAw],” Terrie said.

The movement, which started in the Philippines, is named after Gabriela Silang, the first Filipino woman to lead an Ilocano revolt against the Spanish colonizers. Centuries later, her namesake group was founded during the decades-long dictatorship of Ferdinand Marcos.

GABRIELA evolved into more than 200 organizations in the Philippines and abroad, providing both history and activism training to Filipino women. Terrie explained, “There were Filipinos here who knew what was happening. There’s always been a tie, even though we’re the diaspora.”

Today, the group fights another oppressive president, Rodrigo Duterte. His “War on Drugs” campaign has killed at least 12,000 people — most of whom are the urban poor — since 2016. Last month, Duterte jailed journalists and signed an “anti-terror” law that silences activism. Right now, #JunkTerrorLaw is GABRIELA and other Filipino American groups’ current struggle.

As to how they resolve the infighting that often plagues activist organizations, Terrie said they believe in the principle of unity-struggle-unity: “We’re fighting the same thing: unemployment, landlessness, poverty. We don’t concern ourselves with strictly women’s issues. It’s [about] our homeland.”

For Filipino Americans like Lauren, 24, GABRIELA provides a strong tie to the country, and one that can feel very urgent. “As a mixed-race Filipina, I was looking for a space to learn about my background,” she said. “I was looking for something bigger than college groups, more than food and culture, and to learn the current political reality in the Philippines.”

She heard about GABRIELA through her sibling, who joined a few years before her in 2016. It was how Lauren became involved in the Historic Filipinotown community in Los Angeles, doing outreach such as a Know Your Rights campaign. “We do canvassing for local businesses, immigration and workplace rights, and also asking them ‘Are you experiencing this?’ to gauge the situation,” Lauren said.

GABRIELA sees the rights and betterment of Filipino Americans as related to what’s happening back home. “Even though [the Philippines] is technically free, it’s still linked strongly to the U.S. Duterte is promoting policies that better the U.S. workers, and peasants’ rights are being trampled,” Lauren explained. “As a Filipino American, you can feel disempowered about what’s happening in the U.S. and back home, and what our government is doing abroad.”

Joining GABRIELA empowers Filipino women like Lauren who realized, “We don’t have to wait for a president to make changes. Everyone has a place in the movement.”

Ariana: The Power of Education

Ariana, 25, is one of the chapter’s leaders now, but she was resistant to joining any Filipino group at first. “I’m somewhere between first and second generation. [My parents] wanted me to be Americanized: [they] didn’t teach us Tagalog, talk about their families, what kind of work they did, and why they came to America.”

During her second year at University of California, Santa Barbara, she joined the Filipino group on campus, which focuses on academic, cultural and political pillars. “It opened my eyes to conditions in the Philippines,” she said. Once she graduated and settled in Los Angeles, she felt that something was missing: “I have a role to play with Filipino organizing. That’s what I know the most.”

Ariana found GABRIELA when she saw her college mentor post events run by the group on Instagram. She messaged her mentor and, after an orientation, joined the group. Given that it’s an activist group, members have to know what they are fighting for. Ariana attended Philippine Society and Revolution (PSR) workshops that taught new members history that wasn’t covered in American classes. “Imperialism, feudalism and bureaucratic capitalism make the Philippines what it is today,” she shared.

She is now the Secretary General of GABRIELA-LA. “I’ve been a member for three years. It’s very communal,” she said. Whether she is looking for friendship, activism or identity, a member will find all of that in GABRIELA, while joining a long history of revolutionary Filipinas.

Find a GABRIELA USA chapter near you and follow them on Instagram and Facebook. Learn about President Duterte’s Anti-Terrorism Act and why it is dangerous for Filipinos.