Home ActivismFinding Common Ground — One Dinner Party at a Time

Finding Common Ground — One Dinner Party at a Time 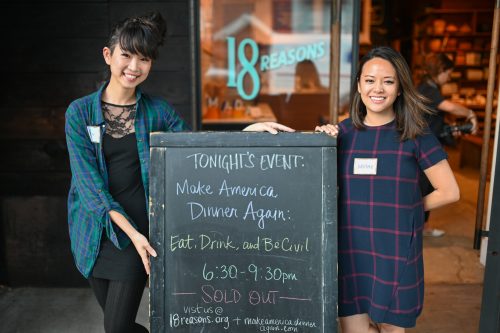 In 2016, the back-to-back police shootings of Alton Sterling and Philando Castile triggered sorrow and outrage throughout the United States. Shortly after, Donald Trump was elected into office. Like millions of Americans devastated by the outcome of the election, Justine Lee (marketing manager at a San Francisco-based design firm at the time) found herself in a downward spiral of sadness, anger, disbelief, and helplessness. Lee feared that Trump’s policies would mirror the inflammatory and divisive rhetoric that characterized his campaign.

Choosing to engage rather than withdraw, Lee and a like-minded friend (and Mochi writer) Tria Chang hosted a dinner party. Their invite list included people who voted across the board or didn’t vote at all. The goal: to find common ground or understanding among guests across the political spectrum.

“Maybe it was naïve, but I was [thinking] maybe there’s something magical that can come out of this,” Lee said.

That “something magical” was Make America Dinner Again (MADA), a nationwide organization that gathers people from all political ideologies for honest discussions over dinner. MADA has hosted over 200 events since it began, with signups for events in nearly every state. The website states that “there are many avenues to protest, to donate, to fight, to be heard; Make America Dinner Again is an avenue to listen.” Trained hosts organize dinner parties, bringing together groups of six to 10 people for respectful conversation, guided activities and, of course, a delicious meal.

Leading up to any MADA event, the dinner hosts and guests agree on guidelines to create a safe, respectful environment. While ideological differences bring the guests together, the event is about hearing people’s personal experiences — where they grew up, what their childhood and families were like, what shaped them and their views. These lived experiences are not up for debate. Learning one another’s stories helps dinner guests to see each other as individuals rather than an extension of an opposing political ideology.

“Before MADA, if I knew someone voted Republican or Democrat, I assumed I could guess all of their stances on political issues,” Chang said. “After meeting and speaking with people of so many different viewpoints, though, I realize we are all much more complex than the political labels we affix to one another. Now when I feel myself tempted to make an assumption, I’m more inclined to ask a question instead.”

During the early days of MADA, discussions centered around people’s views of Trump, but have evolved to become more about their response to current issues. For that reason — and because different people make up each dinner party — no two conversations are the same. Tensions seem to run higher during dinners immediately following a tragedy or trauma, like the Charlottesville rallies, the mass shooting in Las Vegas, and the Kavanaugh hearings.

Dinner discussions span many topics, but one area that often wasn’t investigated as deeply as Lee liked was that of racial justice. In her attempt to remain neutral, as a representative of MADA, Lee often downplayed her political leanings and even her Taiwanese identity. Her desire to address and pursue change in the area of racial inequity remained unexplored.

“In our [Facebook] discussion group, Tria and I would find ourselves kind of shrinking back or sometimes stopping the conversation [about race] before it got any deeper or more raw, because we didn’t feel equipped to hold the space and make sure everyone felt comfortable and safe in it,” Lee said.

Last December, Lee met Jeanelle Austin, the founder of Racial Agency Initiative (RAI), a resource for racial justice leadership coaching, and was inspired by Austin’s work and commitment to racial justice. In early 2020, the two organizations birthed Tea with the People, a series of online conversations on race and democracy in the time of COVID-19. Together, they combined the MADA model of gathering over a meal with Austin’s expertise in guiding conversations about race. The collaboration with Austin empowered Lee to welcome and facilitate conversations about racial inequities and to add to the depth of connection among MADA dinner guests.

Another partnership formed when MADA shifted its events online to accommodate shelter-in-place orders. To bring more structure to their online format, MADA teamed up with Living Room Conversations, an organization with a mission similar to MADA’s, but with experience conducting virtual events. The two collaborated to host a series of conversations about COVID-19, touching on topics like loss and grief, isolation, the upcoming election, and processing information, all of which become a different experience in the midst of a global pandemic. Post-quarantine, these online conversations will continue, allowing people from all parts of the country to connect at a virtual dinner table.

Similar to 2016, 2020 is proving to be another politically charged year. An already polarized country became even more divided over whom to blame for COVID-19, the effectiveness of face masks, the competencies of state and national leaders, and the collective versus individual responsibility to flatten the curve. Then in June, the murder of George Floyd — one in a long line of Black people killed by police over recent years — tipped the scale, further dividing a hurting nation.

With the presidential elections ahead, we are heading into another season of potentially divisive and malicious conversations. While it’s easy to stay in a rut of polarizing candidates, Chang hopes to hear political conversations that focus more on the issues and innovative ways to solve problems. “It’s better for the health of the country if we, as citizens, think through how we want our country to be and vote accordingly, rather than first picking a big personality and then making their beliefs our beliefs,” Chang said.

Lee and Chang offer the following tips for genuinely listening and understanding:

Consider your intention. Why do you want to engage with people with different ideologies? Is it to understand their story and how it shapes their perspective? Or is it to prove a point, make a judgment based on your limited perspective, or persuade them to change their mind? If it’s the latter, most likely your intention will be evident and will be met with resistance. While it can be hard to break patterns of communication with people we’ve had relationships with for years, it’s vital for our tone to reflect an openness and a willingness to learn about the lived experiences of privilege and oppression.

Practice listening to understand and then restating what you heard. Before launching into sensitive issues, practice listening during conversations that have less at stake. If your mom tells you not to sleep with your hair wet or if your roommate is debating your method of loading the dishwasher, use that opportunity to listen with the goal of understanding. Try to avoid immediately judging or getting defensive, which makes the other person feel like their statement is invalid or wrong. After listening, restate what you heard and give the other person time to correct or amend what you heard.

Get to know someone’s story. Consider dedicating an entire conversation to exploring one another’s foundational knowledge and education around topics like race before getting into thornier questions. When engaging with her mom about race, Lee knew there would be areas they’d disagree about. Rather than jumping right into asking her mom’s opinion about racism and Black Lives Matter protests, Lee asked her mom how and what she was taught about race while growing up in Taiwan and how that has evolved over time. This foundation made the conversation less tense, putting the focus on Lee’s mom’s actual experience — something Lee can’t argue with. With an understanding of her mom’s background, Lee could notice where there were gaps in her mom’s knowledge and what she could speak to.

Establish some structure and rely on pre-set questions. This tip works when you know in advance that you’ll be having a hard discussion with someone. Before you engage, answer any questions for yourself to make sure they are fair questions to be asking someone else. Also, consider establishing ground rules that both parties can agree to before entering into a potentially heated discussion. While this may feel contrived, the agreement will set the tone for the conversation and be revisited if the dialogue deviates from the guidelines. If you’re organizing a more formal conversation, check out Living Room Conversations’ conversation guides on topics like climate change, faith in politics, parenting, social equity, and many more.

Lower their walls. During a disagreement — political or not — Chang tries to lower her conversation partner’s defenses by acknowledging some common good, reiterating a point of theirs that she can understand, or mentioning one of their positive personality traits. “This can reassure them that you are not attacking them when you say you don’t agree,” Chang said.

Be prepared to disengage or redirect if things get heated. Ask your conversation partner the “disconfirmation question” — under what conditions would you change your mind about an issue? Doing so gives the other person space to critique their own opinion. Lee also suggested asking your conversation partner to rate their position on an issue on a scale from 1-10. This redirects people away from the “all or nothing” argument that leads to a dead-end debate.

Celebrate trying. Even with these tips and the best intentions, your attempts to have civil conversations will not always work out as expected. Maybe there were distractions or an argument ensued. But celebrate the attempt and have the courage to try again another time if the relationship or topic is important to you.

Before starting MADA, neither Lee nor Chang were trained as facilitators, nor had they ever gathered people to discuss politics. They simply planted a seed, hoping their efforts would foster humble curiosity and understanding. It has since blossomed into a community of people across the nation who believe in the MADA concept and mission and want to build genuine connections — one dinner party at a time.

To find out more about Make America Dinner Again, check out their website for online events and to be updated about dinners near you.