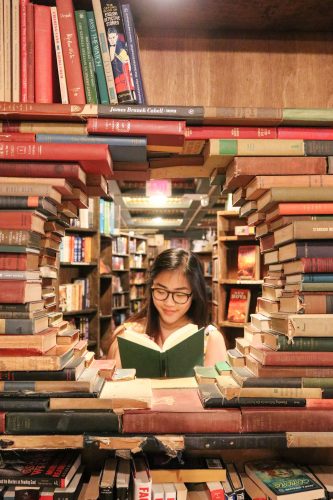 Happy New Year! We hope the new year has been treating you well so far — and that you’ve been keeping up with your resolutions. One of the most common New Year’s resolutions is to read more, and this year, many of us are resolved to become more antiracist. To help with both of these worthy goals, we’ve compiled an antiracist book list.

Check out a few of our favorites; we’ve selected four children’s books, four middle-grade and YA books, and four books for adult readers. Each title is linked to a Black-owned bookstore, so you can simultaneously support Black-owned businesses.

All Because You Matter written by Tami Charles, illustrated by Bryan Collier
Celebrated illustrator Bryan Collier complements author Tami Charles’ loving words with intricate collaged images that are inspired by his grandmother’s quiltmaking. This book traces the love that generation after generation gives their children, and is a reminder of how much each child matters. In a climate where some are not willing to say or act like Black lives matter, this book is a resounding affirmation that Black lives are precious and beautiful, and matter immensely.

The ABCs of Black History written by Rio Cortez, illustrated by Lauren Semmer
Poet Rio Cortez pens an empowering, uplifting survey of Black history, accompanied by the warm and bold illustrations of Lauren Semmer. By reading this book, children of any background will gain a greater appreciation for the contributions and triumphs of Black people in America. It is a joy to take in, with rhythms and stories that will stay with you long after closing these pages.

Antiracist Baby written by Ibram X. Kendi, illustrated by Ashley Lukashevsky
Start teaching antiracist lessons early with this beautifully illustrated board book. Through catchy rhymes and images, it gives parents and children “nine steps to make equity a reality.” Though some reviews critique the vocabulary is a bit advanced for little ones, each page can create openings for parents to have positive conversations about race with their children, no matter their age.

I Am Every Good Thing written by Derrick Barnes, illustrated by Gordon C. James
Dynamic paintings by Gordon C. James pair with positive proclamations written by Derrick Barnes to deliver a message that is true and necessary: Black boys are worthy of love. Black boys deserve joy. They are not what society’s narrative has tried to make us think — they are every good thing, as celebrated on every page of this poignant picture book.

Brown Girl Dreaming by Jacqueline Woodson
Winner of the National Book Award, the Newbery Honor, and the NAACP Image Award — not to mention its place on countless best-of lists — “Brown Girl Dreaming” has been inspiring young readers since it was published in 2014. Written in verse, the book details the author’s story of growing up in South Carolina and New York in the 1960s and ‘70s. As the narrator grows in awareness of civil rights, she also grows into her power as a writer, empowering other girls and boys to find their own voices.

What Lane? By Torrey Maldonado
Author Torrey Maldonado is a middle school teacher in Brooklyn who writes books that speak to his students and their experiences. As a former reluctant reader, he also understands how to make a book irresistible to anyone. “What Lane?” is a fun and fast-paced graphic novel you can read in one sitting. While the book itself is thin, it dives deep into complex concepts. Stephen, the protagonist, is a mixed kid told to stay in his lane. As he navigates among friends what lane that might be, readers will reflect on their own paths and decisions.

Dear Martin by Nic Stone
For teenagers, “Dear Martin” is a powerful, timely, and at times heartbreaking read. It weaves the contemporary story of high school student Justyce McAllister with the teachings of Dr. Martin Luther King Jr. As Justyce faces racism in its many forms — microaggressions, hostile school environments, police brutality — he writes a journal to the great civil rights leader as a way of questioning and making sense of the world. Justyce is one of too few Black protagonists in YA literature, and his perspective is an important one for all readers.

March: Book One written by John Lewis, Andrew Aydin, illustrated by Nate Powell
After the devastating loss of civil rights leader and congressman John Lewis last year, it is more essential than ever to learn his story. Co-written with comic book writer Andrew Aydin and illustrated by award-winning graphic novelist Nate Powell, “March” is a trilogy that takes us from Lewis’ school days to the 1963 March on Washington. This first book introduces us to Lewis as a child in segregated rural Alabama, and shows us the power of students when they organize for a cause.

My Grandmother’s Hands: Racialized Trauma and the Pathway to Mending Our Hearts and Bodies by Resmaa Menakem
The first order of business for ridding ourselves of racism is to heal our own wounds brought about by race, and to mend our “racialized trauma,” as psychotherapist and author Resmaa Menakem puts it. Not only does this book include historical context, psychological insight, and stories from the author’s family, it is also filled with bodywork exercises designed to heal all bodies from within, so we can go forth into the world with more strength to fight against racism.

Caste: The Origins of Our Discontents by Isabel Wilkerson
Called “a masterwork of writing” by NPR, and “the keynote nonfiction book of the American century” by the New York Times, “Caste” sets a new framework for thinking about humanity. Most of us are well aware of how race divides us in America, but perhaps less visible and more pervasive is caste. While race and caste overlap and inform each other, they are not the same. Wilkerson explains that “Race, in the United States, is the visible agent of the unseen force of caste.” She zooms out to show us India and its caste system, Germany and the Nazi caste system, and our own caste system here in America. She also zooms in to show us the very real effects on individuals’ lives, bringing emotion and empathy to her extensive research.

Men We Reaped by Jesmyn Ward
For readers drawn to personal stories, Ward’s 2013 memoir is as relevant as ever. A story of the loss of five young men from the author’s life, this book pays tribute to them while exposing the systems that stole them. Masterfully written, it moves backward in time from the most recent death to the earliest, and forward in time from Ward’s infancy to adulthood. To read this book is to bear witness to pain, struggle and vibrant life, to restore humanity to Roger, Demond, C.J., Ronald, and Joshua—young men who, like many, were taken too soon.

Homegoing by Yaa Gyasi
For those who favor fiction, Gyasi’s novel “Homegoing” is a fast-moving, thought-provoking saga of generational loss. Beginning in eighteenth century Ghana, we see how two half sisters — one married to an English slave trader and one sold into slavery — embark on paths that keep their descendants separated for 300 years. Gyasi renders each character with such love and skill that the reader becomes immediately invested in their journeys. And each interwoven story holds so much loss, one cannot help but think about how much is owed to the families that carry the legacy of slavery.

This list only scratches the surface of the many important and wonderful books that help us see more clearly how to identify and dispel racism within us and around us. For more recommendations, check out Loyalty Bookstores’ Antiracist Reading Recs list on Bookshop.org.