Mochi True Story: Moving Past Depression to Love Myself 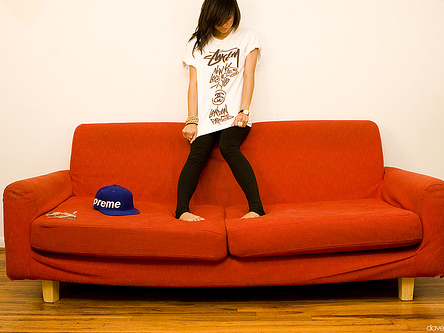 In 2006, the American Psychological Association released a report that although Asian Americans have lower rates of mental illness than Caucasians, they are also less likely to seek treatment. In the second semester of my freshman year of college, I was one of those Asian Americans who didn’t seek help. I hid my depression from my parents and only told a few friends, but everyone could see I was different because of how I was acting. The relationships I formed that semester fed into my downward spiral, but new relationships also got me out of it.

The downfall began when I had a three-month streak of bad romantic relationships that year. One of the guys I dated went so far as to tell me that he had never wanted to be with me in the first place—from there, my self-esteem took a major hit. I internalized every negative feeling I had about myself, assuming that the reasons people didn’t want to be with me was because of something I had done. I was constantly unhappy, and even told friends I couldn’t remember the last time I had smiled or been truly happy. I kept saying the same things over and over again, until several of my friends wanted nothing to do with me. The only time I mentioned it to my parents was once when I told my dad a little of what had happened—but then I told him I had put it all behind me. This depression, I felt, was my own problem, one that most people wouldn’t want to hear about because nobody truly cared. I felt so low that I contemplated suicide, both at the end of last year and during the summer.

Once I was in that spiral, there were some brighter points that showed me there were alternatives to keeping it all in. I was part of a discussion group that focused on APA issues. They became my family at college, and I trusted them enough to one day tell them about my depression. They were the ones who convinced me to go to the student counseling services offered at my school. Several of them also put themselves out there and offered to talk to me whenever I needed it, so I could have a place to let out my feelings.

I called the counseling services, and after a short phone questionnaire to determine what I needed, I was given an appointment slot with one of the staff psychologists. Unfortunately, there was a one-month waiting time. I went for three sessions, all with a woman who spent a lot of time listening to what I had to say. I wasn’t offered advice, but rather an idea of why I was behaving the way I was. She was nice, and her insights were interesting, but by the time I got there I had had enough time to feel better on my own. There was nothing overly clinical or intimidating about the process, but I felt like I had gotten past the need.

Just as there were ups, there were also downs by the time summer rolled around again. I found out that a friend had been making unkind remarks about me behind my back, and all of the problems flooded my emotions again. Finally, in what felt like a last-minute save, I met an amazing guy (somewhat ironically, through an ex who was badmouthing me on Facebook). He has supported me ever since we met, and has always encouraged and supported me as I tried to mend my other relationships. He’s gotten me to love myself again.

All of the things that happened to me were because of my relationships with others, but in the end, I think that’s because those relationships influence our lives the most. One of the most important things I’ve learned is that no matter how close your friends are, sometimes you need to talk to a counselor. I had been repeating the same things for so long because nobody knew what to say, but counselors are trained in that aspect. Most colleges have a counseling service for students, and they will recommend outside services if needed. If you don’t like the counselor you’re given, which has happened to me, request another one. Sometimes, talking to a friend is enough, but keep in mind that they aren’t trained to help like professionals. And finally, seek counseling as soon as you’re feeling the least bit upset or depressed. The earlier you go, the better chance you will have to address the issue and move past it quickly. Dealing with depression is tough, but everyone needs some sort of supportive relationship to move past it. Just find the person you can go to any time, and say, “I need to talk.”