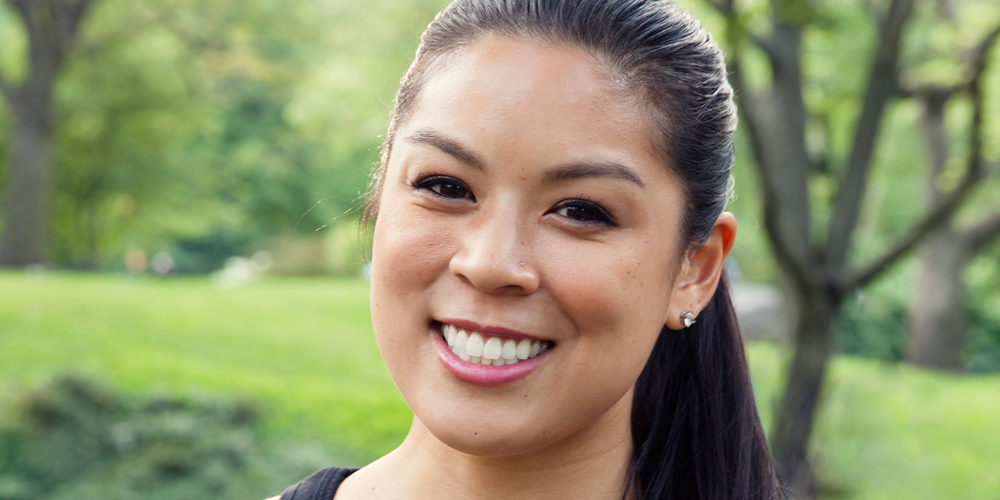 Judging by the petite and unassuming looks of Daphnie Yang, most wouldn’t guess that she’s a hardcore personal trainer and high-intensity interval training guru. But once you get past her friendly smile and charming personality, you’ll notice her strong, well-defined arms and steel-cut legs—this is one woman who means business.

The California native’s fitness roots stem from years of dancing and being active in middle and high school. While others practiced their Suzuki and honed their Beethoven chops, Yang was busy playing soccer and swimming and running track. “My parents were traditional in the sense that they wanted us to do well in school, but they didn’t expect me to do anything I wasn’t passionate about,” she says.

Yang smiles as she recalls her first run, when she was just 14. “My older sister asked if I wanted to join her for an evening workout, we ran 10 minutes around the block, and I thought I was going to die. I was sweaty, bright red, and out of breath, but I knew my life was changed forever—I had fallen in love with running,” she shares. “To this day, running gives me an enormous high and has became more than just a hobby. It’s a huge part of my life and my profession.”

Some years later, that statement is self-evident considering Yang’s accomplishments to date. In addition to running her private personal training company of three years, Definition Fitness by Daphne Yang, she’s also the head race coach for the New York City chapter of Team Challenge, a nationwide half-marathon training/fundraising program benefitting the Crohn’s and Colitis Foundation of America. And, most recently in October 2013, she launched HIT IT!—a high intensity interval training workout (one that alternates between intense bursts of activity with periods of complete rest or less-intense activity) that’s designed to burn fat and sculpt lean muscle mass.

If you get to experience any of Yang’s HIIT IT classes, you’ll immediately notice the dance influences in her workouts. That’s because Yang received a BFA in dance and theater at New York University in 2007 and became a certified personal trainer through the International Sports Sciences Association shortly after.

After graduation, she became a personal trainer at a local gym. “I knew I wanted to do something that was involved in fitness … But you can only grow so much and do so much working as a trainer at a gym,” she says. That’s when she made the decision to launch her own business and work toward a vision that’s all her own.

Like many celebrated personal trainers such as Jillian Michaels, Yang attributes her success to her rise from overcoming body image and weight issues. Yang was able to overcome these insecurities at an early age by realizing that physical activity and a healthy but flexible lifestyle made her feel confident and empowered. “Fitness is balance. It’s not about dieting and conforming your body to fit a certain size,” she says. “It’s about putting nutritious things into your body, performing physical activities that make you happy, and also about enjoying that glass of red wine, scraping Nutella from the jar, and enjoying a piece—or two—of cheese,” Yang laughs. For Yang, fitness is about letting your body rest at the weight it wants to be when you live a healthful and balanced life—and she encourages all her students and clients to define their own fitness philosophies.

Whether you’re motivated by beach season or just simply want to be more fitness-conscious this summer, Yang has designed a special HIIT IT! workout that you can do in the comfort of your home, hotel room, and even outdoors in as few as 11 minutes. If keeping up with the gym has been a challenge for you, this is a great type of workout to try; studies show that you will see more progress in your weight loss or feel a difference in your fitness after a mere 11 minutes of interval exercise than you would running at a consistent pace on the treadmill for an hour.

Mochi’s got the moves–with great GIFs from Yang to show you how it’s done. Try it out!