How an English Major Found Her (Chinese American) Voice on Campus

It’s the spring of my freshman year at the University of Michigan. We’re all waiting to cross the street. A woman cranks her neck out of the car, and as she fumbles with a cigarette lighter, someone in the backseat points out the window at me. “Hey, you! You!” The car window rolls down. “Chink. What do you think you’re lookin’ at?”

Heads shift. On my side of the street, strangers dart their eyes toward me, then flicker away. The traffic lights purr green, and the woman swerves past. I walk with squinted eyes, loose fists. It’s not the first time I’ve been called a Chink, but it’s my first time of fierce remembrance. I wanted to play tough, use my throat, cuss back, but I felt so tiny. Fearful to open my mouth.

When I began school at the University of Michigan nearly four years ago, I was defined by smallness. I walked across the central lawn of campus each day with an enormous backpack that tussled down my back. I felt weighed down by the curvy brown eyelashes of girls who didn’t look like me. I grew hyper-conscious when speaking aloud in class. 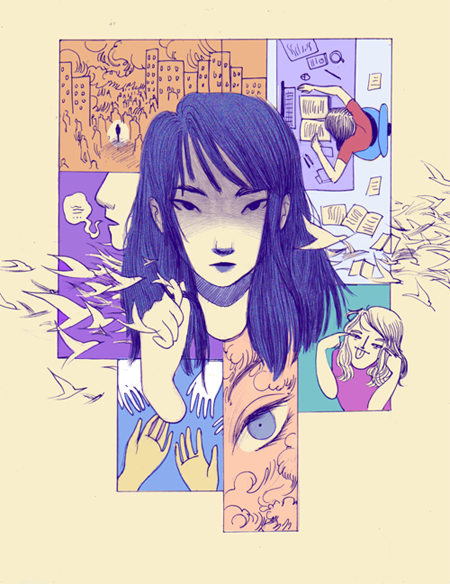 I carefully avoided ordering “Mongolian Stir Fry” at the dining hall, and swore off the school’s wooden chopsticks, reserved for the dorm’s weekly “Asian Night” dinners. I never stood in line at the campus Panda Express. I was Chinese, but didn’t want to be seen as too Chinese. I was American, but never seen as fully American.

It wasn’t until my junior year that I began understanding the intricacies of my role as a Chinese American student on campus. I unconsciously started carving out spaces for myself as a Chinese American woman not only out of necessity—but also out of frustration. I was tired of glancing at my textbooks, only to view the language with a sense of unfamiliarity.

Not because I didn’t understand the words—I did. But because language, for me, not only includes the Middle English alphabet—it also encompasses those conversations with my parents at home, where Chinese phrases are embedded in between rapid-fire English: “Can you bring the jiǎo zi (dumplings) to the sù shè (dorm)?” And it includes my own middle name, Chen, which my English-speaking friends pronounce as “chin,” but whose syllables mean “morning” in Chinese. As a student of the English alphabet, English and Chinese are simultaneous truths I live. I cannot understand one without understanding the other.

In my last year of college, it’s become increasingly important for me to claim and lift my own fear. I aim to ask questions. I aim to not forget. In the classroom, I raise my hand. In my literary studies as an English major, I look for the voices that are pushed over, undermined, lost. I look at the narratives of people of color, of what cannot be reduced to a paper takeout menu or a bonsai tree or a red zodiac sheet.

I made dumplings for the first time in my apartment this past year. Grabbing the dough between my thumbs, I coated everything in flour, kneaded, spread. Used chopsticks given to me as a gift from my mother. I sang songs in English while I cooked, and when the dumplings came out of the steamer, I ate and ate. I looked and looked.

When a woman called me Chink three years ago and asked what I was looking at, I didn’t know how to respond. But now, my project of looking is also a project of wonder. I strive to pay attention to the world. I look and question what I find unjust. I look and thank what I find to be beautiful. Nobody can stop me from looking.

College can be crazy. You fall in love daily, you get hurt, you study hard, and you play hard. I’m not the same tiny figure I was when I began classes at the University of Michigan in 2011. I’d like to think I’ve got biceps, now. School can do that to you.

You read a lot. You get cursed at a lot, from the windows of passing cars. You’re not always given the chance to respond, right then—so you respond later. You look for space to thrive, and when you can’t find that, you allow yourself to be angry. To be complex. To make Chinese dumplings, while singing English songs. To protest. To have pride.

I’ll always look at a piece of myself as small, short. But there is another part of me that encourages myself to look. To understand what I am called by and looked at as. Then to grow enormous, to grow proud. That’s the way you embody some kind of volume. That’s how you stay loud.