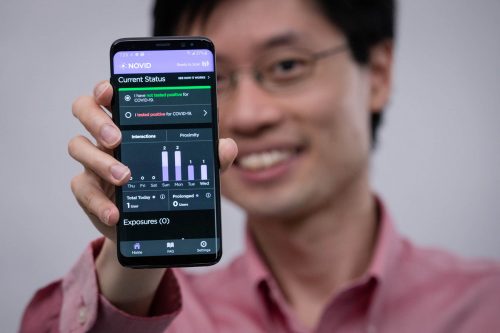 As the COVID-19 pandemic rages on, there remains a thirst for solutions. In the frustrating absence of effective solutions and answers from the government, people have been developing their own. One of these proactive individuals is Po-Shen Loh, a 38-year-old mathematician who developed a contact-tracing app as one way to tackle the coronavirus. Loh spoke to Mochi via Zoom about the NOVID — a portmanteau of “no” and “COVID” — app and the team effort it takes to implement social good.

Loh identifies as both a mathematician and social entrepreneur. He stated, “When you think something is possible, you go ahead and start.”

The first organization he founded is Expii, an innovative and personalized math learning platform. “I started building the website and we got a few hundred people to use it. We collected thousands of explanations,” Loh explained. Fast forward to today: more than 300,000 visitors go to Expii to view math lessons. “The goal is 10 million, so we have a bunch more to grow.”

The path from building a math website to developing a COVID-tracing app was not a walk in the park. As Expii grew, it eventually led him to travel to Bangladesh to demonstrate the platform. On the way to Bangladesh, an ed tech company in Shanghai asked Loh to record some lessons as well. Loh revealed, “I create lots of things and give them away. That, of course, needs some money to fund it. I realized people seem to want to pay me to teach them.”

Loh, who was born in Singapore, went to China for the first time in 2015, when he was 33. “Suddenly, I’m going to China every two months,” he recalled. The frequent visits to China to give talks and lessons continued until January of this year, when the virus started to spread.

“In the middle of March, I got activated to do something about it,” he said. As a Hertz Foundation Fellow, Loh is one of 15 scientists and mathematicians across the country who receive funding for their Ph.D. and are called to act in moments of national emergency.

Loh said, “Then I got the idea for the app NOVID. The only reason it exists is because of everything else I did. People didn’t think it was possible, so I used money from the math classes [to build it.]”

There have been several contact-tracing apps released this year, but NOVID is the first pre-exposure notification app with an early warning network, sub-meter contract-tracing accuracy, complete anonymity, and more. “It’s like a radar telling you about a hurricane moving over time,” Loh explained. When NOVID is running on your phone, it is scanning how many other devices are around via Bluetooth and ultrasound technology, charting the COVID-19 situation around the user and keeping the user safe.

As NOVID is being refined and efforts to curb the pandemic continue, Loh reflects on using mathematics to solve real-world problems. It’s a message he imparts to students as a coach for the U.S. International Math Olympiad team: “Suppose you have all these great skills; it means you have a great responsibility to use it.”

He also speaks to the power of cultural competence.“The ability to understand both countries is an extreme benefit. When you bridge both, you become very powerful.”

“I don’t have every skill,” Loh said. But with the skills he has, Loh’s “commitment has always been to do something impactful for the world.”

NOVID is available for download for free on the Apple App Store or on Google Play.