Home Arts & Culture, Sponsored“Telling Our Own Stories”: Rising with the Tides, a storytelling project by Comcast California and Asian American Journalists Association

“Telling Our Own Stories”: Rising with the Tides, a storytelling project by Comcast California and Asian American Journalists Association 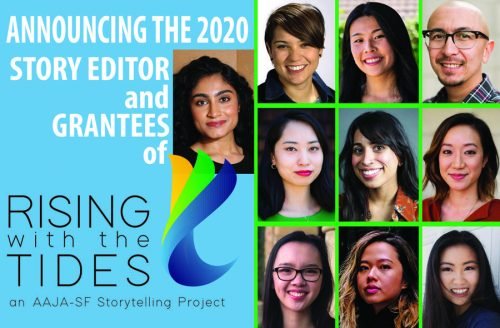 This article was produced in paid partnership with Comcast. All opinions belong to the writer and do not represent the opinions of Comcast or its subsidiary companies. Applications are now open for the 2022 program’s editorial coach and fellows. Deadline is October 6, 2022.

There’s a problem with the media and it’s not fake news. The media paints a portrait of America that is 90% white and it is time to change that. People of color are continuously cast in the same roles over and over again, e.g. criminal on trial, homeless, etc. American news does not truly reflect our lives, and when the media does, it holds our actions, values and beliefs at a distance. Yet our lives are as vibrant as the “average American” (read: white person), and it’s in these quotidian moments that the uniqueness and strength of our varied cultures shine through.

Who controls the airwaves determines what narratives are told. This fact became most apparent at the beginning of the coronavirus pandemic, when scapegoating of Chinese people resulted in acts of violence against Asians across the nation, but those stories often failed to make the news. Comcast California and the Asian American Journalists Association (AAJA) noticed this lack of coverage, along with how the ongoing COVID-19 crisis was affecting journalism.

“Coming together in April and May [of this year], we saw the anti-Asian sentiment, the hate crimes going on in the Bay Area, and at the very same time, AAJA reached out to us because they had just completed a survey with their members,” said Rubi Martinez, the multicultural public relations manager of Comcast. “The information that came from it was that their members were suffering [due to the state of the economy and discrimination] and the [AAPI] community was being highly impacted.”

Wanting to support the Asian American community, as Comcast has done before with AAJA’s HELLA ASIAN fundraising campaigns, Martinez worked with AAJA and NBC Bay Area to create an opportunity for local journalists, especially those impacted by furloughs and layoffs.

What resulted was Rising with the Tides, a storytelling project that launched in July. This joint project called for stories that captured the resiliency and solidarity of our community. In August, the chosen finalists were announced, assigned an editor, and granted a stipend to support their work, and they began their projects in a variety of formats.

Rising with the Tides

With the finalists beginning their projects in September, a seasoned journalist and AAJA member Neeti Upadhye, currently located in Mumbai, was tapped to mentor the nine grantees as the project’s story editor.

“The project is really trying to give AAPI journalists an opportunity to tell our own stories during this really hard time,” she said. “It was kind of a triple-threat that we were hit with: Everyone is going through a global pandemic, there were massive layoffs and furloughs happening in the media industry, and then there was also this rise in anti-Asian sentiments and discrimination.”

But Asian Americans were not the only ones affected this year. You might recall that May 2020 also marked the beginning of the George Floyd protests. Upadhye continued, “AAJA felt that it was important to give our community the opportunity to tell our own stories about communities of color. [Moreover] it was a really poignant moment, because we are seeing these solidarities appearing between the Asian community and the Black community. These are stories that, especially for freelancers and sometimes in general, don’t make their way into mainstream media. The themes that resulted were solidarity with the Black community and resilience within the AAPI community. We wanted to bring some positive stories into the world.”

The grantees are a wonderful mixture of veteran journalists and current and recent college students, all with varied backgrounds. The stories they are sharing are pieces ranging from the growth of Asian American hip-hop crews’ self-awareness to the goodwill of a beloved Oakland cafe owned by a transgender Filipina woman. With a mixture of print and video pieces, the project tells our stories in ways that do justice to the nuances of our everyday lives, triumphs and struggles.

I caught up with two of the grantees to learn more about their projects.

The Rise of Youth Activists

A somewhat industrial city — home to the primary motor plant of Tesla — Fremont, CA is considered a suburb, bordering the San Francisco Bay. In the early 2000s, many Asian families flocked to this Bay Area city, transforming the demographics by settling down and raising their children in this Silicon Valley suburb, resulting in an Asian majority population in the local schools. Two decades later, Asians American youth activists from this suburban wasteland return to activate their relatively quiet, highly multicultural communities. Kitty Hu, a Chinese American filmmaker and journalist, inquires why this generation is passionate about fostering an activist consciousness in a place they thought they would never return to.

Following four activists, Hu’s project connects Asian Americans in Fremont with the Black Lives Matter movement, with the upcoming elections, and with consciousness-raising efforts to aid those in need. Hu introduces us to Lucy, who was running for school board, which is still predominantly white despite the fact that the student population is 40% Asian and has been since 2001. Another activist, Justin Valenzuela was working to establish Renegade Feeding as a nonprofit to serve the unhoused. Hu recalls that when filming with Valenzuela, “[It] felt like I was in high school again, walking the train tracks, exploring the city, because ‘What else can you do in Fremont?’, but then coming to the realization that there are encampments like these in Fremont where people live.”

Like the subjects of her video project, Hu recently came back to Fremont after graduating from college: “I was also one of the young people that never thought I would see social action at this level in Fremont, especially for a town that is not very progressive in the Bay Area. For me, when I was thinking about what I can do to amplify the voices on the ground, the people who are fighting for these changes and ultimately fighting for a more equitable community, I turned to storytelling.”

In many ways, the stories that Hu shares are ordinary — youth activists are nothing new — yet so resonant and remarkable for the children of Asian immigrants who had grown up hoping to make a difference. AAJA editor Upadhe noted when discussing Hu’s project, “I had a lot of resonance with that story because I grew up in Pleasanton [another suburban city bordering the Bay Area]. Whenever she tells me about her piece, I am always like ‘Wow, this hits so close to home.’”

The caste system is not typically top of mind when living in America. Most associated with Indian culture, caste discrimation seems like a distant reality. Yet South Asian immigrants are still affected by these social systems of discrimination. Sonia Paul tells a unique story about caste and discrimination in the Silicon Valley by investigating instances where Indian immigrants attempt to “pass” as being of a higher caste.

This article has been a long time coming for Paul who told me that she has been trying to grasp at the complexity of the situation, despite the challenges of reporting on a community that doesn’t want their identity to be known, but then is suddenly unmasked when an act of discrimination does occur.

Paul shared, “Silicon Valley is just one area, but it really is something that is happening throughout the United States. [We need to pause and ask] how can we actually think about this in ways that validates people’s perspectives and also because of the lack of data around this. It comes in piecemeal ways because of the tension of coming forward. For me, personally, this is a story I’ve been trying to report on for years.”

The barriers she faced are not only from the elusiveness of these communities, but also dismissal of these vital conversations by those in charge of our nation’s newsrooms.

“It’s about coming up with a language for editors — who are often not of [Asian descent]. I mean, often the editors I work with, to be frank, are white editors,” Paul said. “This is a story that is really hidden, and it [often] doesn’t feel relevant to those who would inhabit that role in the U.S. It’s like the perennial conversation about who gets to be part of the national conversation in journalism.”

Nevertheless, “caste” might become a part of our daily vocabulary. Although talking about caste seems so out of place in our society, we are beginning to see Black scholars theorize that the racial politics that overwhelm BIPOC lives are actually more resemblant of a caste system, which creates a socially constructed hierarchy among populations.

Of her experience working with AAJA, she acknowledged, “Because of some of the experiences I’ve had, it has been really beneficial to have a mentor and [be supported] by AAJA It feels like there is someone behind me, a group behind me, to push me and help me be confident in the material. It’s easy to gaslight yourself when you have so many frustrating conversations with editors who call your story too complex or unnecessary.”

In the coming weeks, Upadhye and AAJA will work closely with the journalists to pitch and place these pieces. The other awardees are Shuang Li, Helena Ong, Erin Woo, Jocelyn Tabancay Duffy, and a team of three journalists J.P. Dobrin, Stephanie Tangkilisan, and Cecilia Lei. In partnership with NBC Bay Area, video projects like Hu’s are being aired on Asian Pacific America Hosted By Robert Handa.

In fact, Li’s piece was recently published in The New York Times. She illuminates the heartwarming story of how a fortune cookie company in Downtown Oakland decided to add Black Lives Matter messages to their cookies. It’s a piece about intergenerational understanding and how Asian families are coming to terms with their anti-Black sentiments.

Reflecting on the impact of the Rising with the Tides storytelling project, Upadhye said, “Many of us know how it feels to be one of the only minorities in the room. Or when we are pitching stories important to the Asian American community, it may not be the biggest story of the week or have the angle that seems important to that newsroom because COVID or wildfires are happening and all these other things. Being able to give the grantees the money and time to pursue [stories about] the impact those crises are having on the AAPI community is super important.”

That’s the beauty of a project that uplifts the diversity and spectrum of interests, values and challenges of our plethora of Asian American communities.

Asian American Journalists Association (AAJA) is a nonprofit and professional organization that values diversity in newsrooms and strives for accuracy and fair coverage of communities of color. You can learn more about the journalists and their pieces on AAJA’s spotlight page for the Rising with the Tides storytelling project.