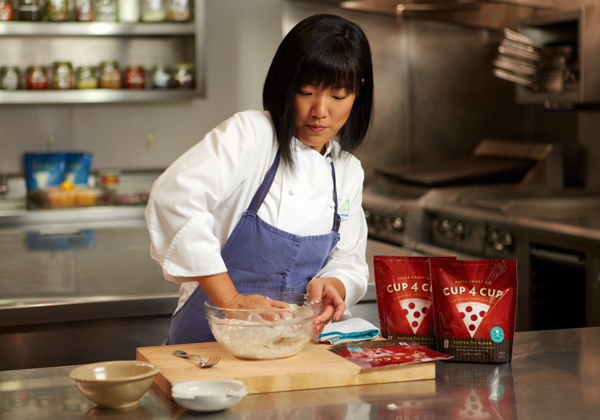 Chef Lena Kwak was surprised when she learned, at 26, that she had been named one of Forbes’ “30 under 30” trailblazers in Food and Wine in 2012, joining a venerable list of honorees (across various industries) such as Lady Gaga and Mark Zuckerberg. It had only been a year since she launched her first Cup4Cup gluten-free flour to rave reviews from both celebrities like Martha Stewart and people with celiac disease.

What sets Cup4Cup apart from the many other gluten-free products on the shelf is that it’s directly comparable to standard wheat flour, meaning that Cup4Cup flour can directly replace wheat flour in recipes at a one-to-one ratio—hence its name.

Prior to launching the product, Kwak developed her expertise by studying culinary nutrition at Johnson and Wales University, an area she wanted to explore before going on to medical school. “It’s every Asian parent’s dream that their child becomes a lawyer or doctor. I was going to pursue medicine but a large portion of me was undecided, so I thought, ‘Why not go into culinary for a bit?’” she explains, adding that she thought she was approaching her decision from a very practical standpoint. “I thought it’d be a transitional period with that year of experience, but going into it, there were more open doors once I was there.”

After studying culinary nutrition, Kwak landed a coveted internship at Thomas Keller’s French Laundry restaurant in Napa Valley. There, she had the opportunity to work closely with he renowned chef, who soon became her mentor. “I’m always amazed at how he has pushed me. There are many things I am good at and many things I’m still learning,” says Kwak. “He’s really pushed me to listen to my gut. He’s really good at squeezing water out of a rock.”

It was during this internship that Kwak discovered the potential impact that could be made in the gluten-free market when they introduced a gluten-free bread at the French Laundry. “One day, one of the diners came up and wanted to meet me,” says Kwak. “She was weeping for joy because it was the first time she had eaten bread in seven years. This story resonated with Thomas and me, and we knew there was something here to explore.” And so, shortly after Kwak finished her internship and became the French Laundry’s research and development chef, she and Keller co-founded Cup4Cup.

With Chef Keller’s help, Kwak has expanded the Cup4Cup line from gluten-free flour to brownie mix, pizza crust mix, and—Kwak’s personal favorite—pancake and waffle mix. Each mix is versatile, giving bakers and home cooks more options to experiment and create their own recipes. The brownie mix, for example, can be used for lava cake, and the pizza crust mix can be baked into a flatbread. Cup4Cup’s website also features an assortment of timely chef-tested recipes, from quick breads and crackers to stuffing.

As Cup4Cup grows, Kwak hopes to create multiple brands under the Cup4Cup banner, potentially expanding into snacks and beverages. In the meantime, the company continues to foster and support other players in the culinary and gluten-free community. “We’re a small business—we work with a lot of food incubator companies [with whom] we talk to about making gluten-free products,” she says. “We donate products to culinary schools and to local businesses, such as a woman making empanadas in San Francisco, who started making gluten-free versions. Last Christmas, there was a military wife who emailed us that she baked cookies and treats for soldiers, and we donated gluten-free flour to her.”

Kwak describes herself as a professional eater and shopper who wants to spread more culinary joy to those with limited choices. At the end of the day, her goal is to give others more options. Judging from Cup4Cup’s success—it’s now stocked at high-end stores like Williams-Sonoma and has garnered praise from bloggers to consumers alike—it’s clear that she’s well on her way to doing just that.