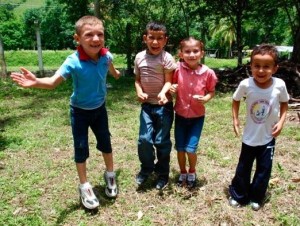 Sophia was a shy five-year-old, sitting alone on the bench. When I approached her, she perked up, posed for me and laughed at herself, enjoying the attention of the camera and moving to the rhythm of my shutter speed. Once she came out of her shell, her soft friendliness put me at ease. With her inquiring eyes, she silently asked for my sunglasses as a prop. Through our mini-photo shoot, I felt like I was getting to know her as well as her hobbies and interests.

I met Sophia during my second trip to Honduras, where I served as a trilingual translator for doctors and dentists who catered to 200 to 300 patients a day. Since the healthcare system in Honduras does not cover basic checkups, locals flock to the practice four times a year when medical volunteers from New York donate their services. Translators are required because it is the only way immediate medical concerns of patients can be communicated. Because we were limited to the bare minimum as far as medical supplies were concerned–for instance, no proper chairs or lighting equipment–we needed to know exactly what was bothering the patient, as most symptoms are internal. Based on patients recalling suffering from extreme coughing, dizziness and chest pains, a common diagnosis was asthma due to dangerous levels of pollution from local Pepsi factories.

I found out later that day that Sophia was deaf and mute. The revelation was humbling and completely unexpected–all I had seen was the happiness on her face, her eyes bright as she smiled from ear to ear when we went through the pictures from our photo session. It was a kind of appreciation that I hadn’t seen in children her age back home in the U.S.: the simple contentment that comes from fully embracing what you have.

My trips to Honduras have taught me more than anything I could have learned in a classroom. We often see television ads encouraging us to donate money to the less fortunate, but to be part of the community–pitching in the time, skills and effort into making this world a better place for others–is a completely different experience. These experiences have convinced me that I want to be involved in this kind of community service as a career, even though exactly how I want to contribute is not yet concrete.

Traveling and volunteering is an incredibly rewarding experience. You give a part of yourself to others around the world; you become a part of an international family filled with members who share the same passion for helping others. You’ll test your limits and discover how far you are willing to go for others, but perhaps more importantly, you’ll meet amazing people like Sophia, who can flip your worldview on its head.

It’s easy to take the first step by making the decision to help others. Start at Idealist, which lists available positions in fields from communications to medicine to law. For mission trips, Gosummerprojectis a resource that takes applicants of all religious affiliations, offering opportunities both locally and internationally. Finally, the well-known Habitat for Humanity dedicates itself to “eliminating poverty and homelessness” by building housing.