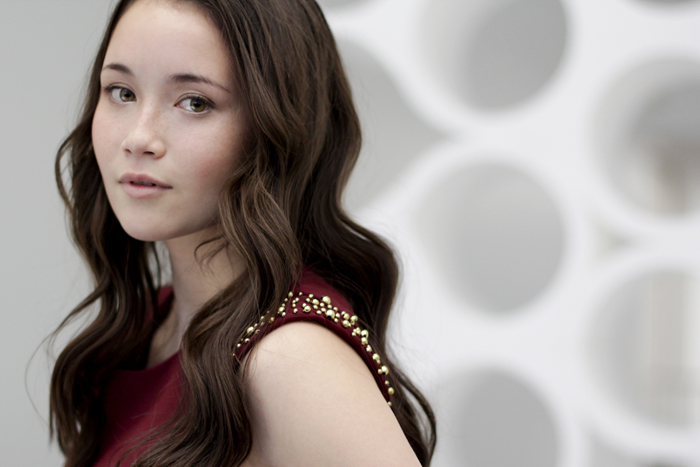 While preparing to interview young new actress Katie Chang, I had no idea what to expect. “The Bling Ring,” the 2013 Sofia Coppola film that she’s starring in, is based on the true story of a group of California teenagers who burglarized the homes of many celebrities, including Paris Hilton, Rachel Bilson, and Lindsay Lohan. Chang’s character, Rebecca, is based on the real-life Bling Ringleader Rachel Lee. As the head of the group, Lee harbored a taste for luxury, was called “spoiled” and “haughty” by her friends, and was involved with drugs and alcohol. Right before our interview, I wondered if Chang was going to be anything like her character—but to my relief, I found the actress to be ineffably warm, intelligent, grounded, and funny.

When she auditioned for “The Bling Ring,” Chang had only been acting for a few years. Her manager found a casting announcement for the film, not knowing that Coppola was set to direct it, and Chang sent in an audition tape of herself talking about dinosaurs and her love for paleontology. To her surprise, Coppola and the casting directors wanted to meet her, so she flew out to Los Angeles in September 2011.

Three months later, she was called in to audition again, and a few days later, received the part. For Chang, this was a surprising first job. “It was weird to be lifted from this Midwestern lifestyle and suddenly live in Los Angeles in a tiny apartment with my mom, trying to keep up with school and work,” says the Illinois native.

Impressively, unlike many of her peers in the industry, the high school senior has plans to attend university, and was recently accepted to Columbia University in New York City. Even when Chang first began shooting for “The Bling Ring,” she disciplined herself to keep up with high-level classes, eventually finding a rhythm in juggling work and school.

“I’m very serious about school—it’s an important part of my life. Acting is a huge part of my life, too, but it is just one part and I don’t want it to define everything about me,” says Chang. In the years to come, she plans to both act and study creative writing in college, with dreams of writing and producing her own films one day. Ever the student, Chang is quick to add: “I’m also always interested in anthropology, paleontology, and archeology. I don’t plan to limit my options in regards to the things I want to study.”

When it comes to acting, Chang cites Nora Ephron, Tina Fey, and Lena Dunham as inspirations. The type of characters they write and play, she says, motivate her to play and pursue characters that aren’t “regular girls” and to always maintain a level of integrity in her work.

Even with regards to the character of Rebecca in “The Bling Ring,” Chang dug deep to find something real about the role she was initially hesitant to play. “She’s the wild child, doing drugs, and getting drunk. She’s very manipulative and selfish—I try not to be those things,” she says. “But I was able to sympathize with her because underneath all of her greedy actions, there’s a girl who is desperately unhappy with herself and her life and wants to be popular and beautiful.”

Though Chang did not grow up a troubled child like her “The Bling Ring” character, living in a predominantly white neighborhood came with its own pressures. Chang is one-quarter Korean from her dad’s side, and she recalls always checking the “other” box when she took standardized tests. Because of her Asian last name, she never knew whether she could be considered Caucasian.

But in recent years, Chang’s been trying to truly embrace and understand her Korean roots through food and art. “ ‘Asian American’ is becoming its own thing,” she adds. “It’s a mix of Western civilization and then the Asian civilization. And it’s something I’m incredibly proud of.”

For aspiring actresses, Chang advises getting formal training and taking proper classes. “The biggest myth I see with girls our age is that they see someone on the Disney Channel and they say, ‘I can do that, I’m going to be an actor.’ And then they go to their parents and say, ‘Hey, Mom, can I have an agent?’—I just don’t like that mentality,” she says. “You should treat your work the way an athlete does. My mom made me train for a year and a half before she even let me entertain the idea of pursuing an agent.”

And we can’t think of a better authority than Chang to be sharing this advice. The actress has accomplished so much at a young age and has already finished wrapping up another film, “A Birder’s Guide to Everything,” with Sir Ben Kingsley, Kodi Smit-McPhee, and Alex Wolff. We’re looking forward to seeing these upcoming films and can’t wait to see what the future holds for this young, levelheaded actress.

Special thanks to AKIRA Chicago and Pitaya