Traci Van Horn on Disney’s “Hannah Montana” is spoiled and obnoxious. To top it off, she has a sinus problem that makes her nasally voice painful to listen to. Beneath all this, however, is a happy and bubbly half-Japanese, half-Jewish, self-proclaimed “Jap JAP,” all sans the whiny voice. (Jap JAP referring to being Japanese and a Jewish American Princess, of course.) 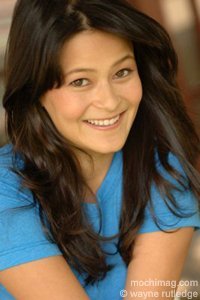 So far, Romi Dames has guest-starred in nine “Hannah Montana” episodes and plans to continue working for the show in the future.

Dames officially got into acting at age nine in Japan after begging her parents to let her audition for the musical Annie, and landing the role of Molly. When she moved to Seattle, the first thing she did was flip through the yellow pages and call every theater asking about auditions.

“Some of the theaters said, ‘No, we’re a movie theater,’” Dames said. Despite these mishaps, Dames began getting cast in plays, thus launching her acting career.

Traci is Dames’ favorite character to play. “I can be as big as I want to be,” said Dames who was born on an army base in Yokosuka, Japan. She was born on November 5, but the year remains a mystery to everyone except close friends and family.

“The more of a blank palate you are, the more roles you are free to play,” she said. “And I want to play everything.” Dames refuses to reveal her real age and enjoys seeing herself as anywhere between 15 and 30 on different websites. While most websites say she’s in her mid-20s, IMDB says she’s 29.

The Disney audition called for a rude and bratty girl, which Dames claims was interesting for her to play because she is the polar opposite in real life. Dames also artificially adds the nasally voice to her character. In fact, according to Dames, the only similarity between Traci and Dames is that they both like clothes and cats.

The actress enjoys playing Traci because the character behaves in a manner Dames does not. In reality, Dames cannot go around making unbelievably snobby comments to people as Traci does. “It’s fun to be the bad guy because people try so hard to make everyone happy,” Dames said.

In the world outside of “Hannah Montana,” Dames is a normal girl with a humorous streak. She passes her time by hiking, watching movies and feasting on salmon sushi. Like many girls, Dames adores shopping for clothes, particularly clothes by English Clientele. She was thrilled when she was allowed to choose which English Clientele outfits to wear for a magazine shoot earlier this year. English Clientele, catering to the more professional woman, launched in 2006 and is inspired by the 1940s fashion styles. The line has been featured in magazines such as Vogue and Genlux and ranges from $89 to $3,000 per article of clothing.

The actress has always had a penchant for acting. When she and her family moved to Seattle, Washington when she was almost 13 years old, Dames liked to fool her neighbor into believing she had a twin by appearing in different clothes. Her neighbor eventually found out Dames was an only child when Dames had friends over. “[My friends] totally blew my cover,” she said. “I could have kept it going for years.”

Although she is living her dream, Dames claims that there is not much to do in between roles. “There’s a lot of patience involved,” she said. “And I’m not a super patient person. I want everything to happen quickly. There’s a lot of downtime in between roles and I can’t do much about it. I try to fill that time by taking classes. As an actor, I don’t feel like I have much control over my career.”

In 2007, the Writers’ Guild of America launched a strike against the Alliance of Motion Picture and Television Producers, an organization that represents the interest of 397 American film and television producers. During this time, many actors were out of jobs, but Dames found a job as a host and VJ for Ford auto shows from December 2007 through March 2008.

She considers herself fortunate to have found a job so quickly during the strike, but is happy to get back to acting. In the future, the actress would like to try her hand at movies. In the theater world, Dames’ dream role is Juliet from “Romeo and Juliet.”

“I love that she goes through everything and feels this wide range of emotions from the silly girl who has a big crush to being devastated,” Dames said. “She grows up during the course of the play and I think that’s a fun thing to do. You get to play everything.”