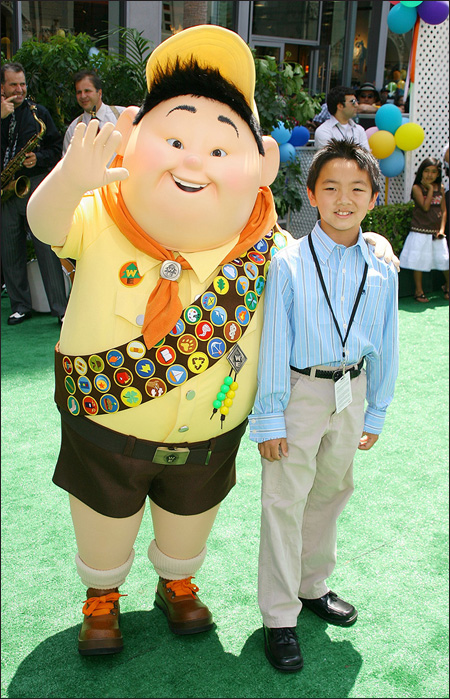 I had to do a double take when I first saw the trailer to Pixar’s latest computer-animated feature, “Up.” No, it wasn’t the talking golden retreiver, the Fruit Loops-esque dodo bird or the endearing octogenarian protagonist, Fredricksen. It was the fat, hyperactive boy scout, Russell, whose almond-shaped eyes and black tuft hair took a moment to register.


Then suddenly, the revelation dawned on me. Is Russell Asian? Could it be? An animated Asian character without a stereotypical accent, martial arts know-how, and other clichéd cultural cues? I had to YouTube the trailer again and do a little research before I was convinced. Yes, all evidence points to Russell being Asian.

A wholly touching film that will have the most emphatic of audiences weeping within the first 12 minutes, “Up” marks a progressive stepping stone in media’s representation of Asian Americans. Finally, 14 years after Pixar premiered “Toy Story” in 1995, we see the first casting of an Asian American lead animated character, who is voiced by 9-year-old Japanese-American, Jordan Nagai, no less! And according to the LA Times, the pudgy, eager boy scout who accompanies Fredricksen was modeled after Pixar animator Peter Sohn, who is of Korean descent.

Just as the refreshing possibility of Russell’s ethnic identity rushed through my mind when I initially viewed the trailer, a second more sobering one immediately replaced it: Asian American representation in mainstream media has a long way to go before we no longer feel the need to rely on stereotypes to denote an animated character of our own ethnicity. Pixar incorporated Russell’s ethnicity so subtly that other than his facial features, there are no other clues. I mean, sure, “Mulan” was great, but for once, I enjoyed the ambiguity of having a hard time deciding.

What about you, readers? Did you realize Russell was Asian immediately or did it take awhile? Did you question yourself when no other cultural clues lent themselves to the idea?