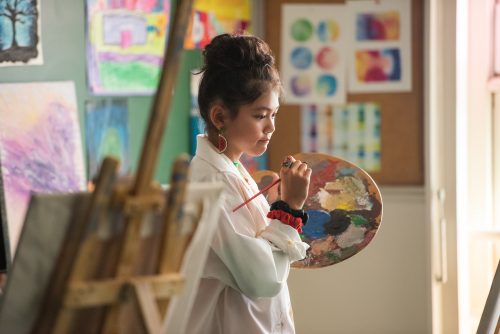 Whether you’ve read the books or not, you’re probably familiar with the impact Claudia Kishi had on Asian Americans who grew up reading “The Baby-Sitters Club.” She’s been the subject of a short doc, a comic, a podcast episode, as well as a series of tongue-in-cheek “remixed” book covers.

The core characteristics of Claudia haven’t changed in portrayals of her over the decades. She loves art and sharing that art with others, and her parents are hard on her about her grades because she isn’t good at science or math like her older sister Janine is.

But what drew me to Claudia growing up was a moment in the second book in the series, “Claudia and the Phantom Phone Calls,” when Claudia reveals that her IQ — like Janine’s — is above average. “Everyone is amazed, since I can barely spell, but that’s why my parents and teachers come down so hard on me,” Claudia narrates. “I’m smart, but I’m not a good student. They say if I’d just ‘Pay Attention and Concentrate,’ I could do fine in school. But who cares? I’d never live up to Janine.”

Reading that, and seeing Claudia evolve throughout the series, helped me understand that there was more to being smart than straight A’s in certain classes. While my parents pushed me to think about accounting or medicine, Claudia encouraged me to think about the arts. And, like Claudia, being creative was what motivated me outside of the classroom. I wasn’t the artist Claudia was, but I loved writing and music and directing my stuffed animals in short films. I also admired how outgoing Claudia was, and I wished I had the confidence she had to put glitter in my hair, wear homemade jewelry to school, and walk up to new classmates and instantly become their friend.

Throughout the series, I felt like I really got to know Claudia as I followed her adventures and cheered for her and grieved with her. It was the longest relationship I had with a character that I not only saw myself in, but a character I viewed as a role model and who I felt could really understand me if she were real.

Watching actress Momona Tamada, 13, bring Claudia to life felt like reconnecting with an old friend — one whose closet I still envy, and who inspires me to be as bold and brave as she is about the things she loves and believes in. That’s something Tamada said she’s most excited about in being part of Netflix’s newly released “The Baby-Sitters Club” series.

“I want people to see that they’re not alone, even though they [may] feel like they’re the only ones going through some of these problems,” she said.

When viewers first meet Claudia Kishi in the series, we learn a handful of things about her: She likes clothes and boys and drawing on her shoes. Her grades aren’t great. She keeps bags of candy stashed around her room.

It’s not too far off from the Claudia that fans of Ann M. Martin’s original book series are familiar with — fans like Tamada. “I read the books growing up in elementary school and I just loved them so much,” Tamada told me in an interview last week. “Claudia was a huge inspiration to me. It was the first time I saw myself in a book.”

That part of our conversation made me smile. Claudia was the first time I really saw myself in a book too. Reading “The Baby-Sitters Club” growing up, I always felt like Claudia was a complete person, not just a character who was there to serve as a support pillar or as an antagonist to other characters’ dreams and aspirations. She had her own stories and her own triumphs and insecurities — something that I rarely saw in the books I read or the shows I watched at the time.

When Martin introduced Claudia to the world in 1986, it was an opportunity for young readers to see an Asian American featured so prominently in a series as a main character — especially one that broke racial stereotypes often reinforced in popular culture.

Over the course of more than 100 novels written in the 14 years Scholastic published “The Baby-Sitters Club,” readers got to know Claudia best for her passion in art. This passion is what drew Tamada to the character even before she was cast. (Tamada has also danced competitively since she was four and has modeled for lululemon.)

“I’ve always been a creative person and I’ve always loved anything artistic,” she said.

But Tamada noted she also differs from Claudia when it comes to grades and her relationship with her parents. “I’m so lucky my parents have always been super supportive and they’ve always been like, ‘As long as you try your best, it’s okay.’ Which is something I’m really grateful for.”

Tamada’s filmography is short but impressive. The Vancouver native has appeared in the second season of AMC’s “The Terror,” which was mostly set in a World War II-era incarceration camp that held Japanese Americans; and in Netflix’s “To All the Boys: P.S. I Love You,” the second film in the “To All the Boys” franchise based on Jenny Han’s bestselling novels.

“It was definitely difficult to find that kind of representation as a kid,” Tamada said as she reflected on the Asian American characters she looked for in books, shows and films. “So it’s nice to kind of see this change and to see more diversity and more inclusivity.”

A New Kind of Club

Netflix’s adaptation of Martin’s bestselling series is not the first time the fictional town of Stoneybrook has been brought to life for the screen. There was a 13-episode series that aired on HBO in 1990, and a feature film released five years later — both of which told original stories about Claudia and her babysitting business partners Kristy, Mary Anne, Stacey, Dawn, and their junior members Mallory and Jessi.

What distinguishes the new series, created by Rachel Shukert (a writer and producer whose credits include “GLOW” and “Supergirl”), is its use of plots and titles taken straight from Martin’s books, though the stories have been updated for viewers today. The girls now have cell phones and talk about social media marketing in their initial plans for advertising the club. There are also references to Postmates and Instagram, although the club still uses a landline to receive calls. (Claudia got the phone on Etsy.)

But it’s not just technology that gets an update. The power of the 10 episodes on Netflix lies in the series’ ability to touch on relevant and important topics without talking down to the audience — and that’s truly what sets the new “Baby-Sitter’s Club” apart. In the fourth episode, Mary Anne delivers a moving speech to a doctor who misuses a transgender child’s pronouns. During the two-part season finale, Claudia and Dawn lead a protest at summer camp after discovering that certain art activities would cost campers extra money, therefore excluding some kids from being able to participate.

And in the sixth episode, Claudia’s grandmother Mimi suffers a stroke and has trouble with her speech and memories. It’s a jarring experience for Claudia, who is used to lively and candid conversations with Mimi, to see someone she loves changed so suddenly. At the same time, Claudia is struggling after receiving criticism that suggested her artwork lacked a connection to anything personal.

Tamada said a lot of preparation went into that episode for her. “It’s very emotional and just kind of a big character arc for [Claudia],” she explained. “It was a challenge, but I’m really excited for people to see it.”

As Claudia faces the possibility of losing one of the most important people in her life, the episode is also a chance for her to connect with Janine and to learn about how the incarceration of Japanese Americans during World War II affected her own family.

“I don’t understand how someone could do that to a family,” Claudia says as Janine explains what Mimi went through as a child at Manzanar.

Janine pauses before replying, “I don’t understand why they still do.”

As the episode ends, the camera zooms in on Claudia’s latest artwork: a drawing of a young Japanese American girl wearing the type of coat and identification tag that Janine described to her earlier. It’s a poignant moment that finally helps Claudia understand how to make her art personal.

Watching “The Baby-Sitters Club,” I’m moved by the depth of Claudia’s storylines. The Claudia I remembered from the original book series was the start of seeing someone who looked like me be portrayed as a complete character. This Claudia is an extension of that, and it’s heartwarming to know that there will be a new generation of “Baby-Sitters Club” fans who will continue to have Claudia as a role model to look up to.

Check out the trailer for “The Baby-Sitters Club” or watch the 10-episode series on Netflix. You can follow Momona Tamada on Instagram at @momonatamada.