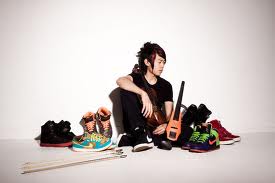 Meet YouTube virtuoso Jason Yang, who went from studying International Relations at USC to following his passion for music and turning it into a career. Since then, he’s come a long way, touring with Madonna during her MDNA World Tour and playing for The Tonight Show with Jay Leno, The Colbert Report, and Glee, among others. We caught up with Jason to learn more about his career change and his tips for aspiring YouTubers.

Mochi: You majored in International Relations while at USC and thought about double majoring in violin. Did you always know that you wanted to play violin for a living?

I actually did start out at USC double majoring in International Relations and Violin Performance and was optimistic that I could handle both programs at the same time. The combined workload quickly proved to be too overwhelming so I dropped the violin major during my first semester. All I knew at the time was that I wanted to keep playing the violin, but I also understood the inherent risks of pursuing a career in music, so I chose what seemed to be the safer, academic route. I started making YouTube videos during my third year at USC and then began realizing that I might just be crazy enough to go for the career in music anyway. I picked up and completed a minor in Music Industry during my senior year and crammed as much information and insight as I could gather from my professors before being sent out into the real world to fend for myself.

Mochi: You’ve done covers with electric and acoustic violins, but in your most recent video, “The Dark Game of Hobbit Knight Thrones,” you primarily used an acoustic. Why?

You can almost always produce warmer and richer tones on acoustic violins in comparison to electric violins. When I play my acoustic, I can convey a wider spectrum of emotions, which was crucial for this video. Since this video falls into the soundtrack category, I primarily used my acoustic violin to build a symphonic violin section, while using my electric violin through my effects pedals to make a cello and bass support section. I spent so much time working on this video and it’s actually my own favorite out of all the ones I’ve done!

Mochi: What did being Asian mean to you as you were growing up in New Jersey?

Not much, to be honest. I always had very diverse groups of friends and I never really experienced any racial divides or epiphanies on the subject. I guess being an Asian growing up in New Jersey mostly meant that I played the violin and piano like everyone else, competing in the same competitions, and auditioning for the same orchestras. So in that sense, it was a little tough to find an identity at times, but I’ve always gravitated towards diversity. Maybe that’s why I’ve been so happy living in Los Angeles for the last seven years. It’s pretty much as diverse as its gets!

Mochi: Do you have any advice for aspiring YouTube musicians?

GO FOR IT. If you have an idea for a video that you’re passionate about, there should be nothing holding you back from creating it. Many aspiring YouTube musicians whom I’ve talked to have told me that they’re either intimidated by the haters and the trolls or that there are already other channels with large fan bases doing the same acts or making the same types of videos. I can completely understand these concerns, as I dealt with them when I first started YouTubing. It can be incredibly terrifying to put yourself out on the Internet for public consumption. But if you believe in your act and in your skills, that confidence and fearlessness will translate through your videos and supporters and subscribers will come naturally. Of course, proper marketing and social media packaging play significant roles as well, but if you don’t believe in your own product, you can’t expect anyone else to.

Do you and keep on doing you. I’ve always stuck with what makes me happy and what inspires me, as opposed to following trends and supposed standards. You’ll notice that most of my videos are just of me playing comfortably in my room. I don’t create videos often but when I do, it’s when something has inspired me to the point where it’s so much fun to make. There’s no greater feeling than putting all your effort into making a video that you’re proud of, clicking ‘Upload’ and then watching what you just made before knocking out from exhaustion.

Mochi: You’ve toured with Madonna on her MDNA World Tour as her violinist in her band. You’ve played on The Tonight Show with Jay Leno, The Colbert Report, Glee, an HBO promo event for Game of Thrones, and much more. Are you surprised at how far you’ve come? What’s in store for the future?

I must admit I am pretty surprised at how far I’ve come, though I never sit down and quantify it. Success is all relative. Wealth is all relative. Happiness, health and hard work are what’s important. I enjoy always keeping things moving and keeping my work diverse. And, although I work hard at what I do, there is always a certain degree of luck involved. Being in the right place at the right time. Not necessarily always who you know, but also who knows you; who remembers you. I’ve had some crazy ups and downs since I started doing music professionally but recently I think I’ve been doing pretty well for myself!

Not really sure what’s in store for the future, actually. Like I said, I thrive off of doing different kinds of gigs and projects, but sometimes they’re so diverse that I can’t even predict what’s coming next. I will say, however, that over the last year or so, I’ve taken a huge interest in film scoring or making music for video games and TV shows. I probably won’t see a sudden transition into this as the primary part of my career in the near future but…you never know. Performing is what I do best right now but I doubt I’ll be able to do it forever. I guess we’ll see what happens!