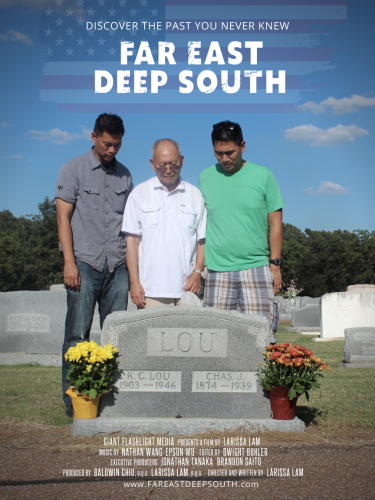 Other than a photo of his father’s grave in Cleveland, Charles Chiu has little to no memory of his father, K.C. Lou. So when Charles, his wife, two sons and their families went to Mississippi to pay respects to K.C.’s grave, they never expected to fill in gaps about their hazy family history, too. The Chius’ discoveries about their family — and the often-untold history of the Chinese in the South during the pre-civil rights era — is covered in a documentary titled “Far East Deep South,” produced by K.C.’s grandson Baldwin Chiu and directed by Baldwin’s wife, Larissa Lam.

In Mississippi, the Chius’ expectations for learning about K.C. Lou are monumentally exceeded. They have a string of serendipitous encounters between the past and the present, including one where they find K.C.’s personal belongings in a local Chinese museum. They find K.C. Lou’s gravesite, visit the empty lot where their ancestors once owned a grocery store, and relive history through conversations with long-time community members who knew K.C. Lou. By the end of the film, the Chius have filled in missing branches of their family tree, and Charles’ sons discover that their roots as Americans go far deeper than their births in San Francisco.

Baldwin and Larissa also realize there is a broader story to tell than just their family’s. In discovering more about K.C.’s life in Mississippi, the filmmakers learn why a contingent of Chinese people ended up in the area and how they filled the void between Black and white communities. The film becomes a platform for Baldwin and Larissa to shed light on how segregation impacted the Chinese in the South, as well as the interconnectedness between Chinese Americans and African Americans during a period of racist laws and sentiments.

When slavery was abolished in 1865, plantation owners sought laborers for their fields and recruited two ships full of Chinese men as replacements for the freed slaves. But the Chinese quickly realized that farm work was a dead-end road to higher economic status. They switched to owning grocery stores, welcoming African Americans who were prohibited from shopping at white-owned establishments. Yet even with their merchant status, the Chinese population still faced discrimination. They were excluded from social organizations and some businesses, and Chinese children attended schools separate from Blacks and whites.

At one of the first screenings of “Finding Cleveland” (Baldwin and Larissa’s 14-minute short that developed into “Far East Deep South”), an African American woman admitted her difficulty in reconciling that the Chinese Americans also faced discrimination. All her life, she thought the African American community cornered the market on oppression, and her experience was diminished when she heard that Chinese Americans also suffered through segregation.

Her perspective wasn’t unique. Baldwin and Larissa began hearing similar testimonies from their African American audience. They quickly realized that how they told their story was equally as important as what was told. How could they share their family’s story accurately and thoroughly without diminishing the challenges of other communities or perpetuating the tension between Chinese Americans and African Americans?

Baldwin and Larissa reached out to the African American community, enlisting individuals invested in their history. Historians and members of the entertainment industry lent their expertise to ensure an equal balance of accurate storytelling and sensitivity. They reviewed footage, hosted screenings, and provided feedback about the racial sensitivities.

Out of these conversations, Baldwin and Larissa honed their films to communicate their desired message more effectively. For example, comments by white interviewees about the Chinese being hardworking and smart were points of sensitivity among many African American viewers. Those scenes were cut from the film as a result.

“They’re just little subtle things, [but] we don’t want to keep promoting that model minority [myth], and implicating that non-Asians were not smart and not hardworking,” Larissa explained, not wanting the audience to be distracted by racist nuances.

Instead, Baldwin and Larissa were intentional about who they interviewed and included in the film. “Far East Deep South” features African American community members who were once patrons of local Chinese-owned grocery stores. They reminisced about feeling welcome in the stores, respecting the Chinese, and how Baldwin’s ancestors loaned money to people who were denied service from banks. For African American viewers, these testimonies from their own community were more powerful than hearing the same words from someone who was white or Chinese.

Baldwin and Larissa are realistic; they know they can’t eradicate racism through their film, but they hope that sharing the story of interconnectedness changes perceptions within Chinese American and African American communities. Through learning one another’s histories, perhaps the two communities will have a better understanding of what they did for one another during a time when everyone seemed to be against them.

Since “Finding Cleveland,” Baldwin and Larissa have been spreading the word about Asian Americans in U.S. history — to raise awareness, as well as to reframe conversations and perspectives around race. They have shown their films in schools, museums, churches and the U.S. Department of Education, following the screenings with discussions about Chinese in the South. A U.S. history professor at Northwestern Missouri State University changed his course curriculum to include the accounts of Chinese people in the South, as did many social studies teachers in Virginia, after attending a workshop led by Baldwin and Larissa.

Changing U.S. history textbooks is the pinnacle of Baldwin and Larissa’s education campaign. But steps to get there include making their films accessible in libraries, schools and universities, and incorporating Chinese American history into existing classroom conversations, whether about segregation, civil rights or World War II.

Baldwin knows where they are coming from. His education of Chinese in America was limited to their work on the railroads and in gold mines. He doesn’t remember hearing much about the Chinese Exclusion Act, but that law was a vital piece of his family’s story, keeping his grandparents separated. “Far East Deep South” can be that intersection, “the linchpin,” as Larissa describes it, that a student of color will use to reshape their belief that segregation in U.S. history is no longer merely an issue affecting Blacks and whites.

Seeing the positive impact of their films and the education efforts has been gratifying. Baldwin and Larissa often see the tendency for Asian Americans to put their heads down, work hard, and stay quiet — something they can no longer do.

“Racial biases are not something we’re born with, so if we can nip it in the bud — starting with elementary education, all the way up — we’re going to have a much better shot at eradicating this,” Larissa said. “It’s not going to happen overnight, and it will take a lot more effort.”

As Baldwin and Larissa wait for society to reopen — and figure out how to premiere a film when movie theaters are closed — they continue envisioning their higher purpose for the film: to make U.S. history curriculum more inclusive, to change conversations around segregation, and to transform how ethnic communities view and interact with one another. “Far East Deep South” is no longer just the story of the Chiu family; it is one where many of us in America can find our own stories, too.

To watch “Far East Deep South” during the Oxford Virtual Film Festival (June 5-12, 2020), go to www.Oxford.FarEastDeepSouth.com. Additional information and a trailer for the documentary can be found at https://fareastdeepsouth.com/.