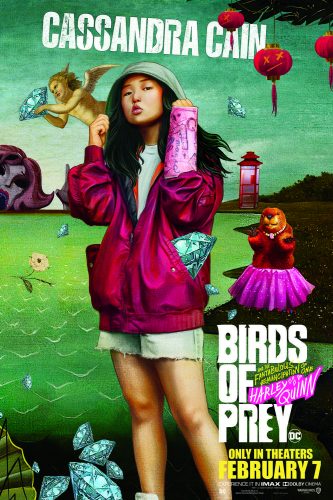 Ella Jay Basco was destined to make it in Hollywood. At only 13 years old, the “half Korean/half Filipina” has made her feature film debut with “Birds of Prey (and the Fantabulous Emancipation of One Harley Quinn).” In the DC comics movie, she works alongside heavy hitters Margot Robbie (Harley Quinn), Rosie Perez (Renee Montoya) and Jurnee Smollett-Bell (Black Canary). Ella Jay’s IMDB credits, which include “Grey’s Anatomy,” “Veep” and “Happyland,” are nothing to sneeze at. Coming from a family of actors, notably her godfather Dante Basco and father Derek Basco, it seems like talent runs in the family.

Ella Jay plays Cassandra Cain, a troubled, 12-year-old foster child, who pickpockets rich people. She unknowingly pickpockets a priceless gem from mobster Roman Sionis, aka the Black Mask. Consequently, she becomes a hot target for all his mercenaries, and it’ll take Harley Quinn, Renee, Black Canary, and Huntress to save her.

Following the world premiere of “Birds of Prey” in London, Ella Jay gave us a ring from across the pond. We chatted a little about the premiere, what it was like to swallow a diamond, and her upcoming music album “Middle School.” The following excerpt has been edited for clarity and brevity.

IP: Congrats! You just had your first world premiere in London last night, right?
EJB: Yes! Thank you so much!

IP: You were wearing a beautiful dress. Can you tell us the story behind that dress? It looks like a mashup of the traditional Korean dress (hanbok) and traditional Filipino dress (baro’t saya).
EJB: I’m half Korean and half Filipino. I really wanted to honor that side and culture of my heritage. So the dress that I wore is from Meehee Hanbok. It’s a modernized version of the traditional Korean hanbok, which is what you wear for ceremonies, parties and stuff.

IP: How did it feel walking down that carpet? Signing autographs…
EJB: It was so crazy. It’s something I never really expected, and I didn’t even know so many people would be there [to] enjoy “Birds of Prey.” It’s super exciting!

IP: It was fun to see your character Cassandra Cain evolve from this lonely, strong and independent girl to joining the sisterhood. What were you doing when you got the call that you landed the role?
EJB: My parents picked me up from school early. I was a little skeptical and I didn’t know what was going on. They started recording me — that’s when I knew they had to talk about something important — and my agent was on the phone. I was a little tired from school, [but] then they just told me. And then my energy completely changed. I was so excited that I bawled into tears.

IP: Tell us about your audition. Going in, did you know the actors tied to the movie?
EJB: I got the script and I read it. What’s interesting was that it wasn’t even pitched to me [as] “Birds of Prey.” I read it not really knowing. I did some chemistry reads with Margot and Jurnee. Then, there was the final audition — it was humongous. Everybody was there: [the] writers,  producers and casting directors. I completely cried in the scene. It was an exciting experience.

IP: How did you prepare for the role?
EJB: I read a lot of comics about Birds of Prey, Cassandra Cain and Oracle.  Other than that, there weren’t any films or anything about Cassandra Cain. So I just based it off of a vulnerable, scrappy kid. The thing that actually really helped me a lot was Natalie Portman[‘s performance] in “The Professional.” She inspired me to do what I did with Cassandra Cain.

IP: What did you learn from your co-star(s) — particularly Margot Robbie since you had the most scenes with her?
EJB: She taught me all about the business, the industry, and really how to work your way around it. She’s so kind. She really taught me how to work with people and that you really can make it in the industry, which is super inspiring.

IP: And director Cathy Yan?
EJB: Cathy Yan is truly amazing. When we were working, she was so open to anything I had to say or my opinion. She really felt like it was okay to change [the scenes] or improv to make me feel comfortable and make it feel like Casssandra Cain is read in the movie. Honestly, she is such a hard worker.

IP: Obviously you didn’t really swallow the diamond, but how was that scene like for you?
EJB: A magician actually taught me some tricks. It’s so funny, but he really taught me how to swallow a diamond, like how to put it in your cheek and fake swallow.

IP: And you were pretty smooth with the pickpocketing?
EJB: He taught me that as well. We had a lot of training on how to pickpocket, like the history and background knowledge behind it. There was one really good scene that shows all of that when I’m actually stealing the diamond. It was something we really had to refine and perfect because it was a close-up and it’s one of the main events for Cassandra Cain. It did take a couple of tries and takes, but once I got it down, honestly it felt like a dance.

IP: What’s next for you?
EJB: At the moment, I’m working on my album “Middle School.” Coming up pretty soon I think right after the movie drops. Lately, I’ve just been working on that and merchandise and music videos. Some of it is actually out right now on Spotify and Youtube. The songs are called “String” and “Grow Up Kid.”

IP: Is there anything else you’d like to share or a piece of advice for young Asian American women trying to make in Hollywood?
EJB: Everyone should really know their worth and that they are valued in the industry. Everybody has a story, an idea, and I think when you really persevere and push through, you eventually get your story shared with the world. I think it’s super, super important to have representation in the industry. Just be you and keep pushing!

Ella Jay Basco is an actress, singer-songwriter and trained dancer. She started her career at 6 months old in an Old Navy print ad and has since acted in commercials and TV series. In “Birds of Prey (and the Fantabulous Emancipation of One Harley Quinn),” Basco is the first actress to play the DC comic character Cassandra Cain in a live-action movie. Check out “Birds of Prey” in theaters Friday, Feb. 7, and follow @ellajaybasco on Instagram.