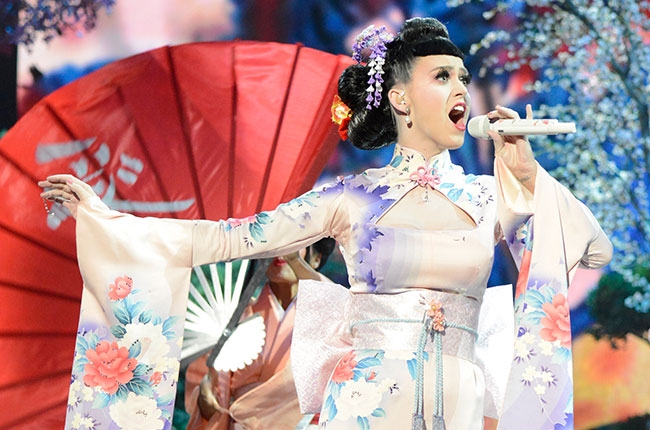 Many of you have seen Katy Perry’s performance of her latest single,“Unconditional,” at the 2013 American Music Awards. As it happened, Twitter and Facebook exploded with backlash from members of the AAPI community. Here are a few reasons why:
As the lights fade in, Katy Perry appears on stage with a heavily powdered face, looking like a Japanese meets Chinese meets Korean geisha—none of which makes a whole lot of sense.

It’s in these small details that Perry is being called out for borrowing pieces of Asian cultures and meshing them together out of their original historical context—also called cultural misappropriation. The costume she wears onstage is a combination of traditional Chinese, Japanese (kimono), and Korean (hanbok) dress. During the performance, she makes generic hand movements like bowing and fanning, while pitter-pattering submissively across the stage singing about unconditional love. At the end of the song, she slowly walks upstage and literally vanishes—poof!—in a cloud of white fog.

As an Asian American woman watching it, I cringed. What kind of stereotypes and racist sentiments do you think she perpetuated with that performance? Asian women are all the same. Asian cultures are…magical. Perry fails to pay attention to the nuances of each unique culture she shamelessly mixes together. As someone who has dealt with a lot of “What are you? You must be Chinese because all Asians are,” I don’t blame anyone for being irked by the singer’s performance.

Perry’s restrictive stereotypical portrayal of Asians hits our community hard because it suggests a number of stereotypes are acceptable —that there is no distinction between the many different cultures, and that Asians are like “China dolls” and “model minorities,” flawless in their looks and love. The Japanese American Citizens League (JACL) in Seattle has spoken out about the performance calling it “careless,” and laden with stereotypes “in an attempt to create a Japanese aesthetic.” Take note of Perry’s non-Asian background dancers wearing heavy makeup to make them look “Asian.” It’s not so different from the blackface costume Julianne Hough received criticism for when she dressed up as Orange is the New Black’s Crazy Eyes for Halloween.

There’s already enough of this imagery in the media to last a lifetime, and Perry’s performance is further perpetuating the hullaballoo that confines Asian Americans to a one-dimensional set of standards and expectations. Her performance continues to mystify Asian cultures, which only results in ignorance.

In an effort to prevent this from happening again, JACL reminds entertainment companies that “While audience approval is important, caution must also be the byword to avoid denigrating and marginalizing a portion of that viewership.”

The pop star’s intentions were probably harmless, but it’s important to be mindful of how such a skit could impact audiences cross-culturally. Ultimately, it’s okay to think something was off about the performance. It’s okay to be offended. What isn’t okay is staying silent about it.