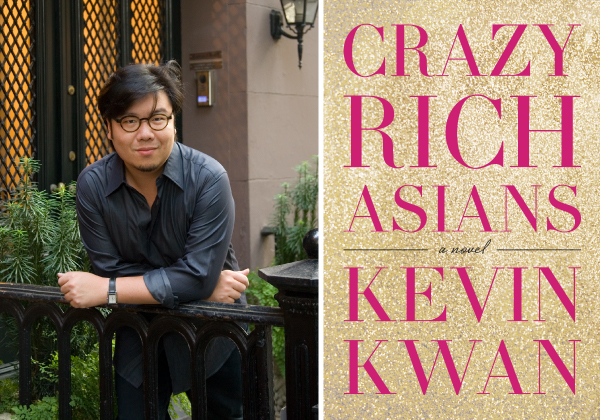 In Kevin Kwan’s debut novel, Crazy Rich Asians, he reveals the obscenely lavish lifestyles of the privileged, impenetrable circle of Asia’s oldest and wealthiest families. The story follows Rachel Chu, a university professor in New York City, who spends a summer in Singapore with her boyfriend Nicholas Young. Unbeknownst to Rachel, her boyfriend is heir to one of the most massive fortunes in Asia with an incredible lineage. Suddenly thrust into a world of palatial mansions, penthouses, private planes, and couture-filled wardrobes, Rachel has conflicted feelings about the Nick she thought she knew.

Born and raised in Singapore, Kwan comes from a privileged family himself. His grandfather was an eminent, wealthy doctor who moved for an arranged marriage to Kwan’s grandmother. Like the characters in his book, Kwan grew up with a huge extended family and plenty of cousins—and, like many Asian parents, his father and mother had hopes for him to pursue a career in law or medicine.

“When I was younger, I actually wanted to be a marine biologist. It was only in my senior year of high school that I really discovered my passion for writing,” says Kwan. “I think creative careers are very slowly becoming more acceptable to the older generation in Asia, but there still remains a huge partiality toward ‘professional’ careers.”

Today, Crazy Rich Asians is an international bestseller, becoming so hugely successful and popular that Nina Jacobson, producer of “The Hunger Games,” bought the rights to make it a feature film. Juicy drama aside, Crazy Rich Asians is appealing in its refreshing characters, who are a far cry from the model minority stereotype: Astrid, Nick’s favorite cousin, is Singapore’s it girl with a wardrobe and jewelry collection to die for; Eddie is a hot-headed billionaire who cares more about his reputation and appearance in the public eye than his own family; and then there’s Eleanor, Nick’s mother, a high-strung, opinionated woman who has strong feelings on who her son should marry.

It will be interesting to see how Jacobson will interpret the personalities in the book on film, not to mention create an all-Asian cast and introduce long-standing Asian traditions to a Western audience. “I do think [the book] could help demonstrate some of the diversity that exists within the word ‘Asian,’” Kwan says. “During my book tours, many readers have shared how they have a new whole appreciation of modern Asia’s dynamic range of countries, ethnicities, and cultures.”

The book also reveals the stark differences in Asian and Asian American culture and issues, most notably by contrasting the perspectives of Rachel and Nick, who were born in the States and in Singapore respectively.

“I created satirical characters for a comedy of manners, so naturally some of them are going to be over-the-top. That being said, I do think that Asians and Asian Americans differ in quite significant ways, and much of it has to do with the fact that most Asians in Asia don’t have the experience of being a minority. When you’re not expected to assimilate into the American culture, buying a silver Lamborghini with gold vanity plates for your 16-year-old may seem like a more reasonable proposition,” Kwan explains.

Moreover, the book explores the generational divide in the notion of love in Asia. The older generations view arranged marriages as strategic familial alliances that protect their fortunes, whereas the younger generation value marrying for love.

As for what’s next, Kwan is currently writing the sequel to Crazy Rich Asians, expected to release in 2015. But amidst all the craziness of his wildly successful book and soon-to-be feature film, what Kwan wishes for the next five years is another kind of lavishness and luxury many of us can afford but can’t seem to give in to: “I would like to write more books and get more sleep.”